Home » Travel » A stroll around one of the most northerly cities, Longyearbyen

Parking bays for huskies, derelict coal mines – and EVERYBODY carries guns (in case of polar bear attacks): A fascinating stroll around one of the world’s most northerly cities

Landing in Longyearbyen, which is located in Svalbard, just over 800 miles from the North Pole, it was still bright daylight at 2am and the temperature was below 10 degrees Celsius, despite it being the height of summer.

I had ventured to the tiny metropolis, which is home to around 2,200 residents, from Oslo ahead of an Arctic boat voyage with adventure travel company G Adventures.

Over two days it was fascinating learning about its history as a hub for coal mining, with remnants of the past left rusting away in the frigid climate. 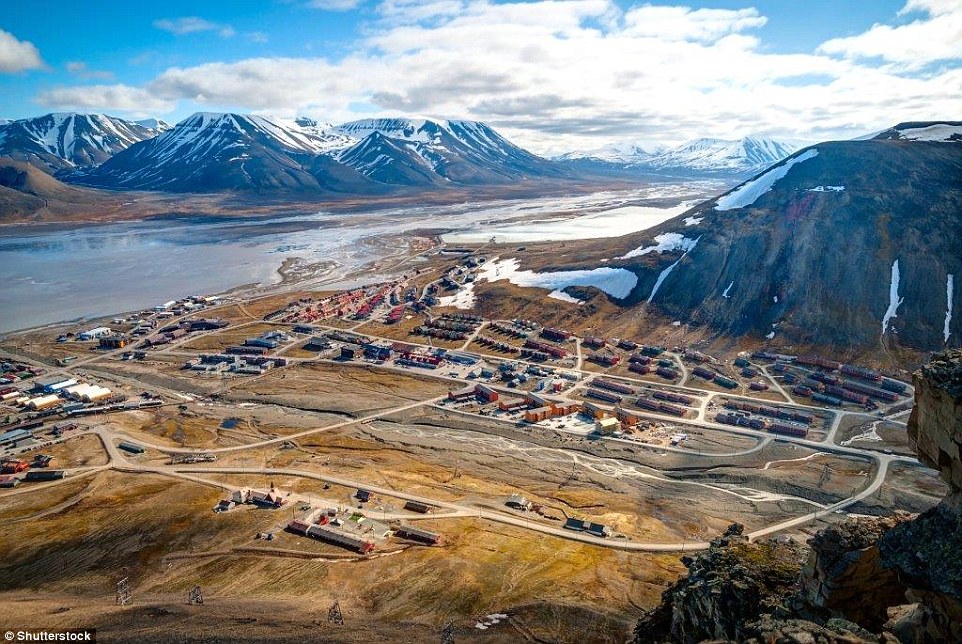 Longyearbyen was originally established by and named after John Munro Longyear, an American businessman whose Arctic Coal Company started coal mining operations in 1906 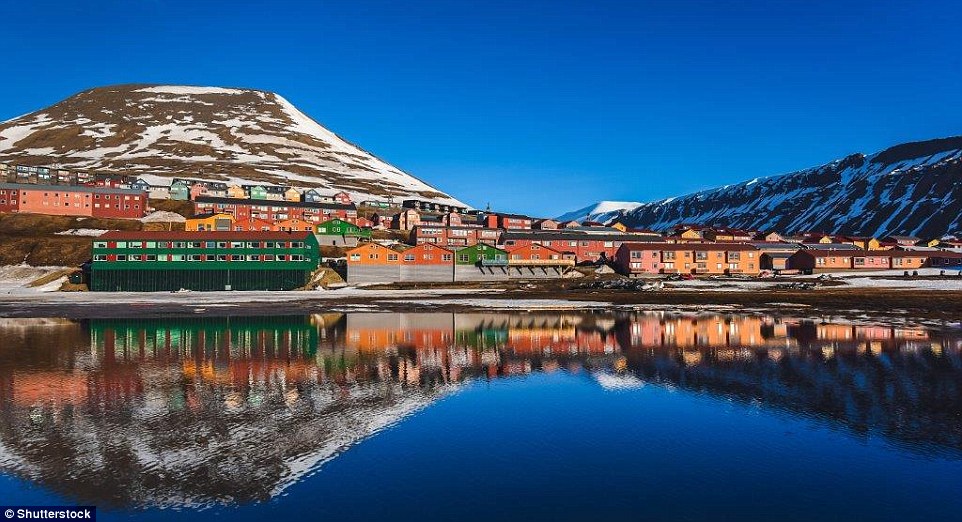 It was also interesting observing local life, with many residents wandering around with rifles to protect themselves from the polar bears that frequent the area.

I spotted signs pasted in a number of stores – including the supermarket and post office – telling customers to leave their guns outside or to store them in secure lockers by the cashier desks.

Meanwhile, there were notices scattered around outside indicating where dogs could be parked.

In the winter months with the onset of snow, locals in Longyearbyen get around on dog sleds, skis or by snowmobile. 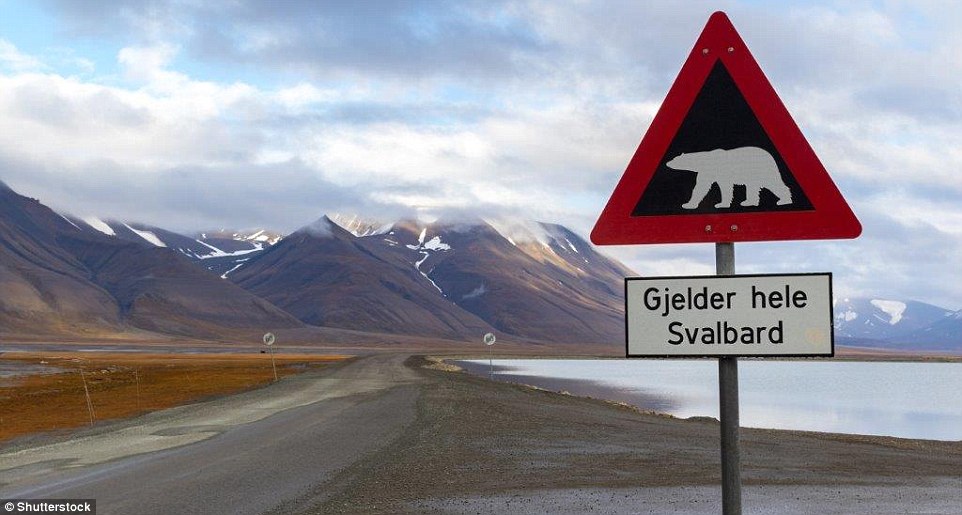 The local wildlife definitely bites: A sign warns visitors that polar bears can be found all over Svalbard 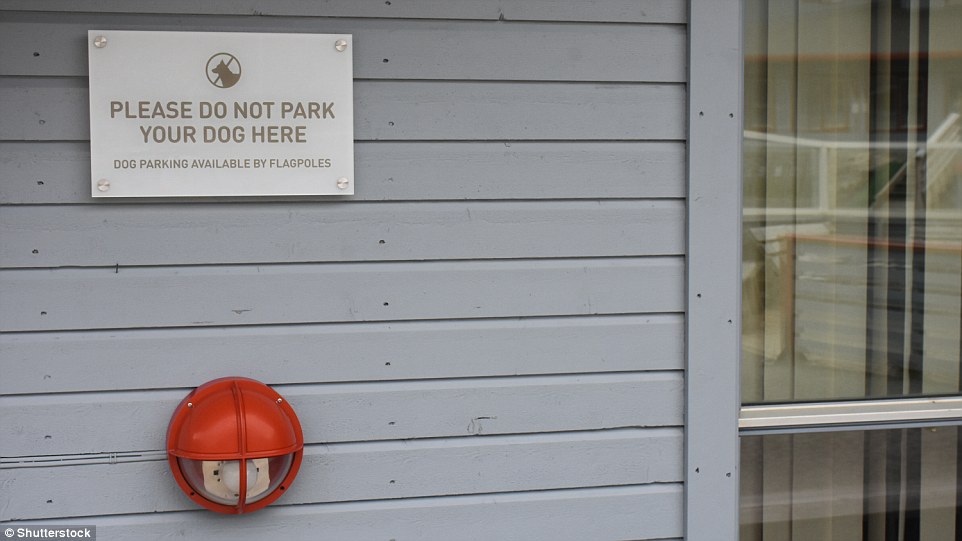 Signs around Longyearbyen instruct people where to leave their dogs. Locals get around on dog sleds in the winter months 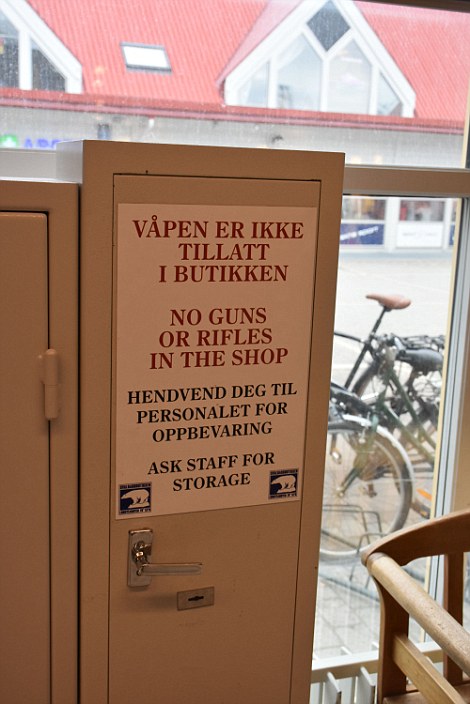 A sign outside the post office in Longbearyen signals that firearms are prohibited (left), while a similar notice is displayed in the main supermarket (right) 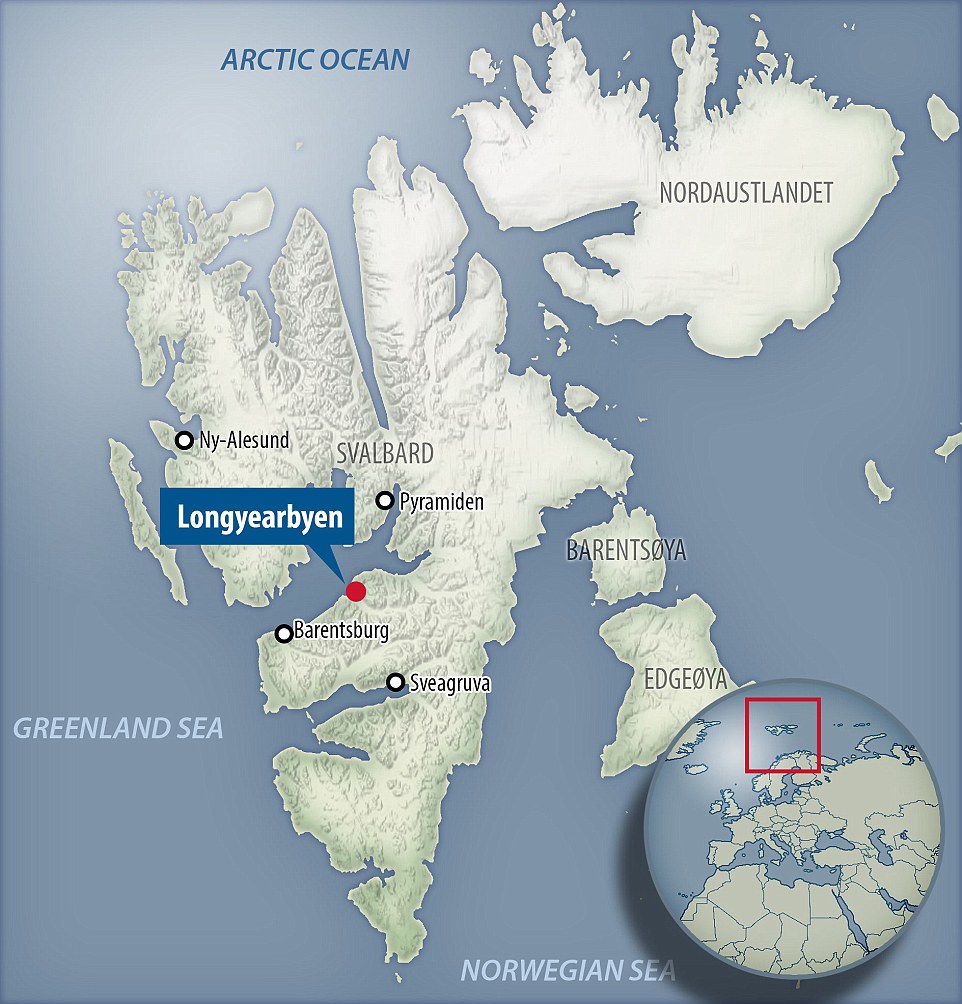 There are few settlements in the world further north than Longyearbyen, as this graphic shows

While I didn’t see many husky dogs around when visiting in late July, there were snowmobiles parked outside almost every house.

Walking through the city’s main street – which features souvenir and outdoor gear shops for tourists – I decided to continue on into the valley where I could see a glacier in the distance.

After passing dozens of coloured houses in shades of burnt orange and moss green (the city employs a colour consultant to ensure all of the buildings are painted in matching hues) the landscape started to get a little wilder.

On the dark hillsides I spotted a number of derelict coal mines, with wooden shacks forming warped shapes.

Longyearbyen was originally established by and named after John Munro Longyear, an American businessman whose Arctic Coal Company started coal mining operations in 1906. 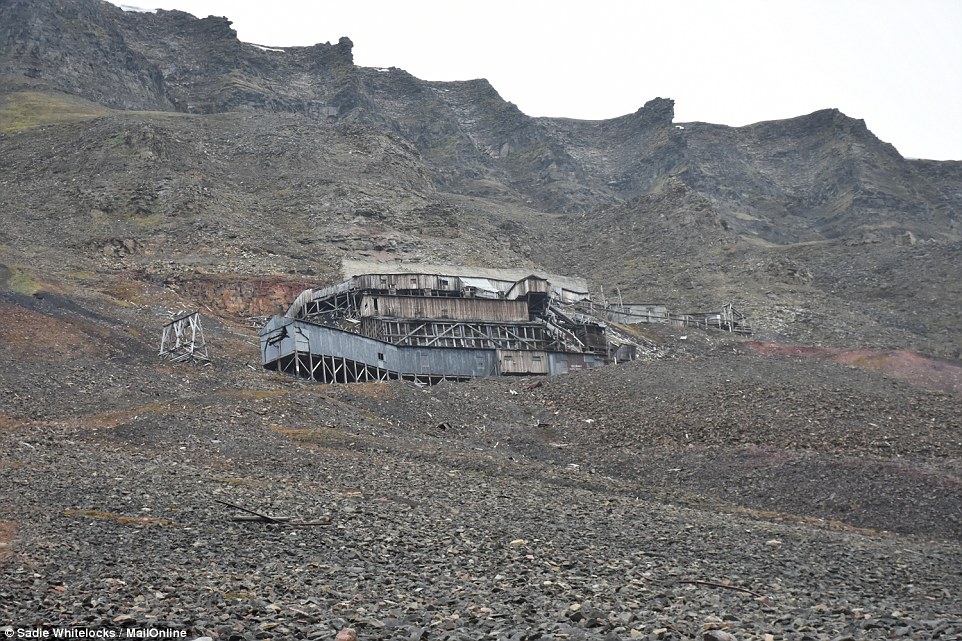 Coal mining has ceased in the Longyearbyen area, with the old buildings off-limits to tourists unless they are on a special tour

Population records for the settlement aren’t that comprehensive but we know that in 1917 there were 180 male workers along with 34 women and children.

In the mid-20th century, authorities strived to turn the industrial town into more of a family community.

The opening of the airport in 1975 helped make Longyearbyen accessible to the outside world and today, with the decline of coal mining, it is better known as an embarkation point for tourist boats.

Many travellers go on from the city to sail around the shores of Svalbard, spotting polar bears and other animals as they go.

After taking a peek from the road at some of the coal mines looming above me, I wondered back towards town, spotting a small graveyard on the way.

Dying is now illegal in Longyearbyen (as is unemployment and homelessness), as bodies don’t decompose in the frozen ground, but the small cemetery that exists in the town dates back to 1918, when seven Norwegian miners died in the worldwide Spanish Flu epidemic. 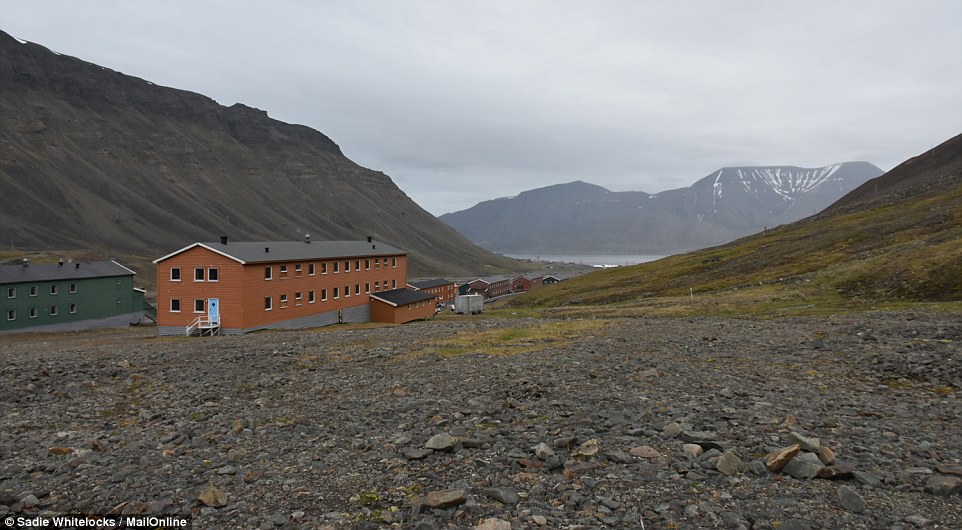 The opening of the airport in 1975 helped make Longyearbyen accessible to the outside world and today, with the decline of coal mining, it is better known as an embarkation point for tourist boats 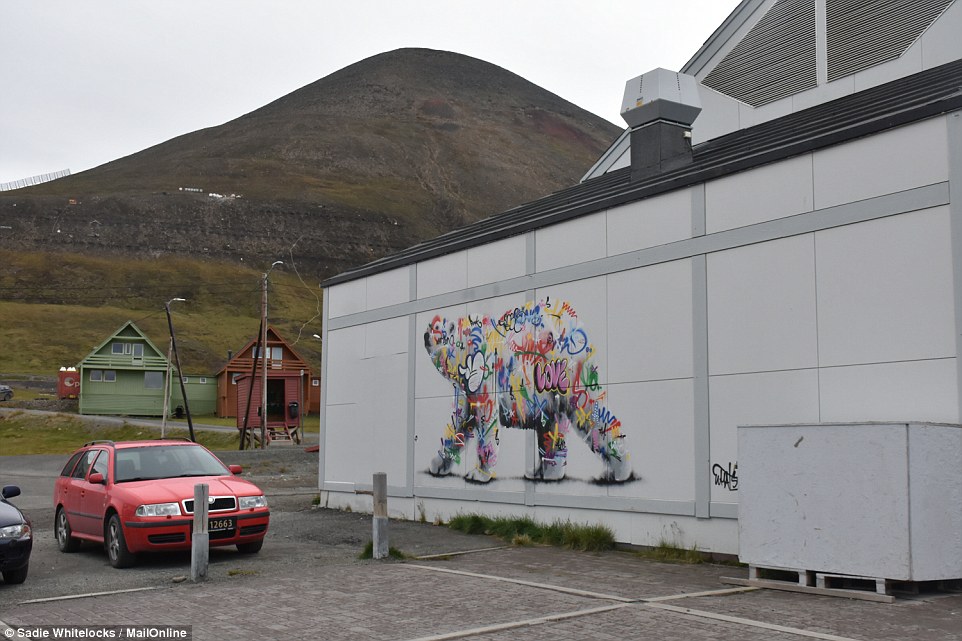 After moseying back through town, I returned to the Radisson Blu hotel.

The 95-room inn made for a very comfortable base, with views of the shoreline and a hot tub outside.

The black-out blinds were also a perk with the 24-hour sunlight.

A friend told me there is also a hostel in town but it’s a little pricier than the standard backpacker spot, with stays coming in at around £70 a night.

Indeed, in true Norwegian style, things in Longyearbyen are pretty dear, with a small cappuccino in a coffee shop downtown coming in at just under £4 ($5).

Along with the coal mines, the local museum and the Karlsberger pub boasting one of Norway’s largest whiskey collections, other points of interest in Longyearbyen include the Svalbard Global Seed Vault, which is home to the world’s biggest collection of seeds.

Oh, and there is Svalbard Bryggeri, the world’s most northerly brewery, which helps residents to push through the cold winter months, when there is no daylight for up to four months. Luckily during my visit, I didn’t need a head torch to get around. 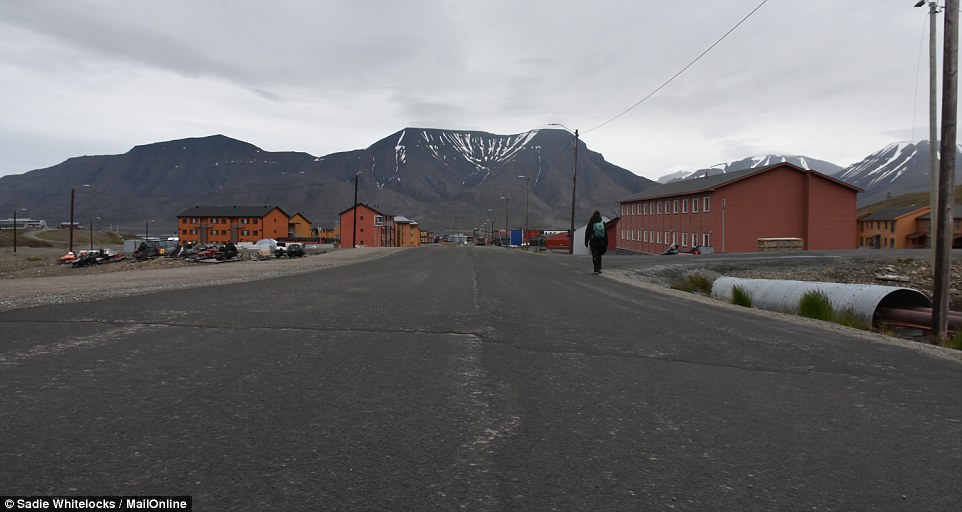 Longyearbyen is also home to Svalbard Bryggeri, the world’s most northerly brewery, which helps residents to push through the cold winter months, when there is no daylight for up to four months

5 Tips for Enjoying Theme Parks With a Disability

A wealth of culinary craftsmanship under one roof ·

These international destinations are open to tourists