Ah, peace at last. I’m lost in a riot of wildflowers somewhere near Glenrothes, and there comes a moment when I’ve never been so close to home and yet so far away. Rabbits bound ahead of me. Dragonflies and damselflies hover. Frogs leap in puddles. The open farmlands of Fife may disguise it, but life here is hidden in all sorts of nooks. 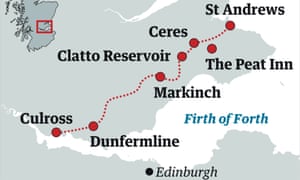 Pilgrimages work the way you want them to and the idea of crossing Fife by foot had occupied me once lockdown hit. Although Scotland has so many great hiking routes through and over mountains, I hankered for a peaceful walk filled with passing moments rather than lofty peaks. Timely, then, that as the Church of England marks 2020: Year of Cathedrals, Year of Pilgrimage, Scotland has a new long-distance walking trail with a similarly spiritual bent.

This little miracle is the Fife Pilgrim Way, an easily digestible, 56-mile path from Culross, on the Firth of Forth, to St Andrews. Supported by the Scottish government, it’s the brainchild of the Fife Coast and Countryside Trust, and aims to lift the veil on the lesser-seen inland parts of the country.

The countryside here is full of religious lore, brimming with abbeys, priories and churches, and a muddy boots tramp is a fabulous way to explore the area’s historical towns. There is also a lack of midges compared with the West Highland Way, as well as little need for a map. The path is religiously served by route markers and gateways, all beautifully drawn on the signs with swirly bits by Edinburgh illustrator Jenny Proudfoot. 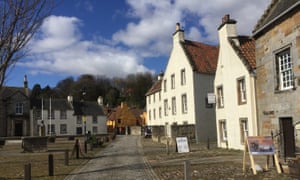 While it’s easy to take the bus or train to the trail’s bookends (Dunfermline for Culross; Leuchars for St Andrews), I’ve opted to cherry-pick the highlights from home in Edinburgh. For three days, during which I’ll cover 35 miles, I’ll see no other hikers, only butterflies and bees. Summer is typically high season for tourism, but with post-lockdown anxiety ruling the national mood, I can’t quite believe my good fortune. Nothing but hills, lochs and forests for miles. And the clincher: the forecast is for sun.

Once nicknamed the Pilgrim Kingdom, Fife is a little-known holy hotspot. A steady stream of salvation seekers once came to St Andrews to see where the relics of one of Jesus’s disciples, Andrew the Apostle, were said to have been brought and some have even tried to make the case for the seaside town to be considered Scotland’s answer to Jerusalem. It’s a stretch, but think of it as a Santiago de Compostela for Scots and Sassenachs. 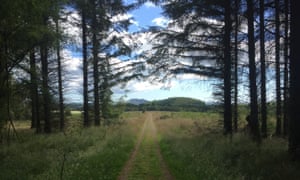 I begin in Culross and everywhere there is a sense of a tale to tell. Dragon-slayer Saint Serf lived here, while Saint Mungo was born in this spot after his pregnant mother was washed ashore having narrowly escaped paternal filicide. Similarly chewy episodes pop up in tartan TV soap Outlander, which recasts Culross as Cranesmuir, a fictitious Highlands village. I buy coffee and cake at Bessie’s Cafe, then I’m on my way to Culross Abbey and St Mungo’s Chapel. I’m not religious – agnostic in fact – but they are simply divine, both animated by marks of mysticism.

A confession: my dad was born in Dunfermline, an 8.5 mile stride to the east, and yet I’ve never before visited the city’s standout attraction, Dunfermline Abbey. In a city of wonderful architecture, the resting place of Scotland’s medieval kings and queens offers a spine-tingling history lesson. Light from stained glass falls on the tombs of Robert the Bruce and Malcolm III, creating ghostly haloes. 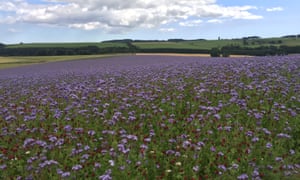 Scotland’s only royal saint, Queen Margaret, is also entombed here. A mother of eight, she became a medieval pin-up for maternal rights, with later queens looking to her holy bones as a spiritual talisman for protection in childbirth. Indeed, when Mary Queen of Scots went into labour in 1566, for the birth of James VI, she had Margaret’s head and hair brought to Edinburgh. If only she’d had gas and air.

After Dunfermline, I make for Markinch, where the 11th-century church, all Romanesque tower and pan-tiled priory, acts as a beacon above the hedgerows. It’s a bewitching presence, prising the horizon open, before the land rolls on, undulating like a concertina.

The trail presents an easy escape into nature, but Fife is far wilder than most people think. There are deep forests, pine-covered mini-highlands and scraggy farmlands. Often, the far-flung Cairngorms shadow the horizon to the north. Keep walking east to Clatto Reservoir and you are rewarded with raspberries and blackberries to pick as you go. It is all very bucolic. 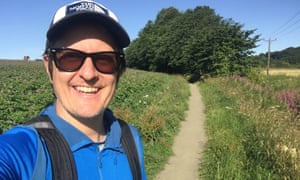 Certainly, you’ll want to wild camp. Right-to-roam laws in Scotland mean it’s doable almost anywhere, and staking out by a whispering barley field is an absolute treat (of course, follow the “leave no trace” ethos). But Fife is also blessed with countryside accommodation: at the halfway point, Balbirnie House Hotel (doubles from £99 B&B) does Downton Abbey meets Macbeth.

On my penultimate day, I drop in on Geoffrey and Katherine Smeddle at The Peat Inn (lunch from £29 for three courses), a lovely restaurant-with-rooms five miles off the trail near Ceres. Today, fear and fever aren’t found in Fife, but the roadside inn, which reopened on 14 July, has tackled the post-lockdown landscape head on. The menu has been simplified to half its normal size to reduce numbers in the kitchen and sanctity has been preserved. Scallops, short-rib beef and a chocolatey soufflé arrive slickly.

By morning, a prayer shawl of cloud covers the trail. From Ceres, with its quaint Fife Folk Museum, the final leg trundles over rough ground to the coast, ducking into sheltered woodlands and hangars of oak and elm. In no time, St Andrews is in sight and, after I’ve rounded the first of its many golf courses, wizard’s-hat steeples line the horizon. 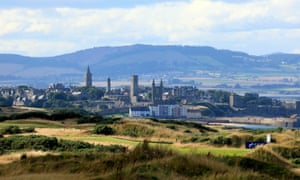 And so to trail’s end at ruined St Andrew’s Cathedral. It is spectacular in its own way — all toothy facade and wonky tower — but the city’s greatest feat for weary walkers is what awaits nearby. Family-run Jannettas Gelateria on South Street is a promised land of milk, honey and raspberry ripple ice-cream, while Cromar’s on Market Street serves up a holy trinity: fish and chips with tartare sauce.

Providence or not, I pass right by its doorstep and order a jumbo haddock. Not for the first time, Fife has delivered and, hobbling to the bus station, I’m left with a goose-bump realisation that, though I’ve travelled far and wide, all of this has been here from the very beginning. There’s a sermon in there somewhere, I’m sure.
• See route information and maps for the Fife Pilgrim Way. For more information, see visitscotland.com

Florida Travel Restrictions: What to Know If You Wish to Visit the Sunshine State