A fair wind returns to the Caribbean: The BVIs were hit hard by Hurricane Irma, but a yachting holiday shows them in all their glory

We were driving in a buggy through the purpose-built Oil Nut Bay resort on the north-eastern tip of Virgin Gorda when our guide pointed to an island across the sea.

‘That’s Necker, home of Sir Richard Branson. He’s a good neighbour and was here for lunch only last weekend,’ she said. That evening, as we sailed by catamaran to our next destination, our small party got into a discussion about Branson.

We were still talking about the enigmatic bearded billionaire when we entered Leverick Bay Restaurant. The upstairs section was empty save for one family party. 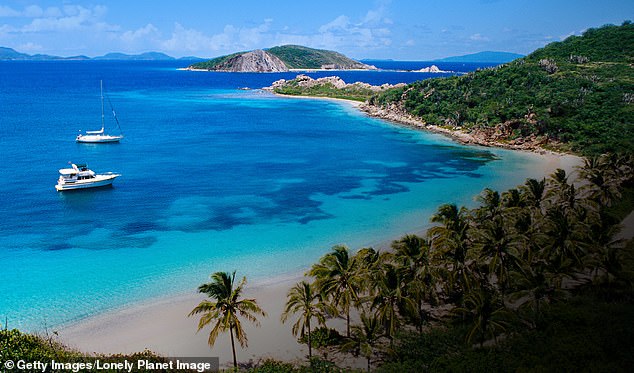 Cool for ‘cats’: The BVIs, as the British Virgin Islands are called, form part of the Leeward Islands in the north-eastern Caribbean. Above, one of Virgin Gorda’s pristine coves

‘Oh look, there’s Richard,’ I said to my companions. They thought I was pulling a fast one. But it was indeed the man himself, who had just sailed over for a candlelit supper. He seemed in good spirits — and so were we after tasting the conch fritters.

There’s about 60 of them, but only 15 are inhabited with a combined population of about 31,000. Temperatures hover between 28c and 31c all year round.

The islands suffered terrible damage in last year’s Hurricane Irma, a Category 5 storm, but the good news is that after reconstruction work, they’re open for business once again.

Getting to these thrillingly beautiful islands is an adventure in itself. We took an eight-hour flight to Antigua and then rode in a 24-seater to Beef Island, to reach the airport where cockerels roam freely.

The best way to do the BVIs is to hire a boat. We boarded our fully equipped Sunsail 454, expertly skippered by dreadlocked local cool dude Alden, that same evening, and spent the next three days island-hopping. On Cooper Island, our first anchorage, we enjoyed a tasty mahi-mahi and chips at Manchioneel Bay and sampled rather too many of the 250 rums on offer at The Rum Bar. 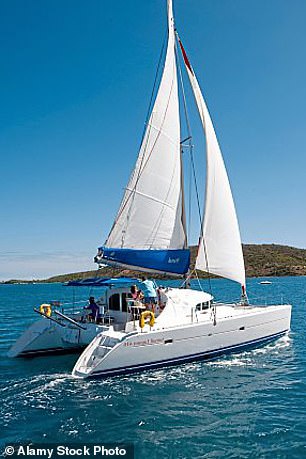 Sunsail offers seven nights on board a Sunsail 454 Premier from £8,723 for eight people

On Gorda, we marvelled at the views from the to-hire or to-buy villas at the impossibly gorgeous Oil Nut Bay, where rental prices start from $750 (£590) a night.

There was great swimming and snorkelling from the stern of the ‘cat’, but a word of warning: currents are strong and on one occasion I had to be rescued by dinghy when my ring-rusty breaststroke proved shockingly inadequate. On day four, we sailed in to Anegada, the most northerly of the BVIs, for a two-night stay.

While most of the other Virgins are hilly, and can be likened to tropical versions of the Isle of Man, Anegada is Norfolk flat. Unlike Norfolk, it’s protected by a fabulous 18-mile coral reef.

The other BVIs aren’t exactly bustling, but in Anegada the pace of life is so slow, you feel like a tortoise. At 5pm, as I sat on the beach reading my novel, I was joined by only two other tourists — and a pelican, who flew by at exactly the same time the following day. Anegadan rush hour, I presumed.

In the Theodolph Faulkner House Museum, we learnt about the fisherman who led The Historic 1949 March which started the restitution of local democracy. We visited an Iguana sanctuary (more interesting than it sounds), and went by motorboat to see the pink flamingos and sea turtles off the impressive Conch Shell mounds.

The BVIs have fame, or, some would say, notoriety as one of the world’s largest tax havens. Yet the ‘financial centre’ of Road Town, the capital, which we drove past on our final day, is tiny. It’s hard to believe that there’s more than £1 trillion stashed away here. When you come as a tourist. It all seems quite unreal.

Just like walking into a restaurant where the only other guests are Mr Virgin and his family.

British Airways (ba.com) flies from Gatwick to Antigua from £520 return. From there, fly on to Beef Island.

Discover the candy-colored Dutch Caribbean island of your dreams