Thank you Hadrian for my 60-mile hike: A colourful autumn trek from Carlisle to Corbridge along Britain’s most famous wall, with the Roman era vividly coming to life

For the first 15 miles or so of Hadrian’s Wall, I couldn’t see the thing. The map on my phone said ‘Roman fortification (site of)’, but there were no visible walls, nor ramparts, nor ditches.

I had left Carlisle in the dark and watched a rosy autumn dawn crack over the unrosy M6. There were a few clues this was Wall Country, but of the wall itself, not a peep.

Soon I came to a hut in a front garden with an honesty-box cafe: cereal bars, Lucozade, ponchos and other comforts. Then, suddenly, the wall – grey stones running through green fields, along roads and up and down steep outcrops. Forget the Shard in London, this is surely Britain’s most impressive structure. 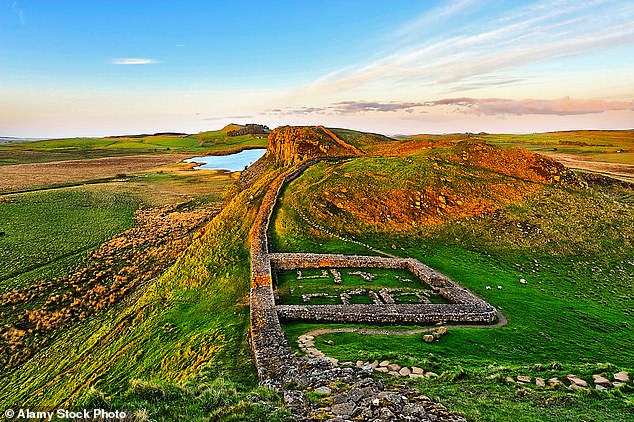 Back in time: The remains of Milecastle 39 on Hadrian’s Wall, Carlisle

Tired of the belligerent Picts, the Roman Emperor Hadrian ordered the wall’s construction after a visit in AD 122, and at its peak it was 73 miles long and 10 ft to 20 ft high. It was built by 15,000 men in just six years. Its more potent evocative effects, however, took a while to kick in.

Over the three days I took to tramp from Carlisle to Corbridge, the Roman era slowly but vividly came to life. Autumn is a fine time to do it, with the trees fading to orange, yellow, brown.

This was once a living border, humming with commerce. The soldiers who manned its ramparts were well paid and came from all over the empire, as I learnt from the series of excellent fort museums, especially at Birdoswald and Corbridge.

Chesters Fort was manned by Asturians, from northern Spain, while a troop of Dacians (modern Romania) kept watch at Birdoswald. At Housesteads Fort there were Syrians, who must have found the weather a shock. Visitors still man the ramparts — I came across plenty of Dutch, Irish and Americans.

Near Birdoswald, an American couple got out of their car and surveyed the horizon with a map. ‘This all over here is Scotland,’ said the man, with a gesture that included almost all of the world apart from Scotland.

‘I think that might be the wrong way, honey,’ replied his wife kindly. ‘Oh, OK,’ he said, turning around, and looking at what he now thought was Scotland, but was still Cumbria. He sighed. ‘It’s just all so old.’ 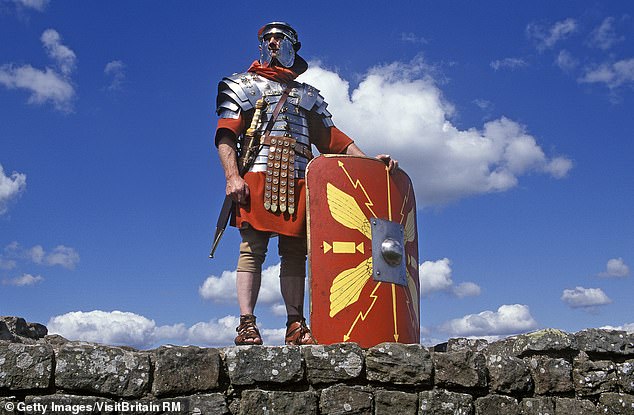 The Roman Emperor Hadrian ordered the wall’s construction after a visit in AD 122, and at its peak it was 73 miles long and 10ft to 20ft high. It was built by 15,000 men in just six years

Only 10 per cent of the wall’s stones are still visible, but large stretches of it are in excellent nick, and the provision for walkers is improving. There are B&Bs, smart hostels (like the new YHA at the Sill) and welcoming pubs.

On my first night I ended up at the Walltown Lodge, a cosy b&b — though when you have walked 26 miles, everything feels cosy. The appeal of hiking is that it transforms mundane activities — sitting in a chair, eating a biscuit — into feats of wild exhilaration. Speaking of which, I was in for a shock in the morning.

‘Boris Johnson slept in your bed last summer,’ said James Milburn, my host, as he set down a Full English. ‘He was on a cycling holiday with his wife. When we saw he was getting divorced, all my mates texted me, saying: ‘It was downhill after you, Milburn.’

The next night I opted for Walwick Hall, a boutique hotel, where I hoped the previous occupants might feel less immediate. On the final day I meant to reach Newcastle, but my feet felt downtrodden. I was bored, too.

Although the central parts of the wall walk are beautiful, there are long stretches that run alongside main roads. Being passed by buses and cars gets depressing.

When I got to Corbridge, I clambered on to a train. It felt only briefly like failure. As the Emperor Hadrian decided nearly 2,000 years ago, it is fine to draw the line before you reach the sea.

London North Eastern Railway (lner.co.uk) from London to Carlisle from £120 return. B&B at Walwick Hall (walwickhall.com) from £195 per night.

B&B at Walltown Lodge (walltownlodge.co.uk) from £65 per night. More information at english-heritage.org.uk.

Airlines seek exemptions to rule for getting federal aid

8 ways to be a more eco-conscious traveler in 2021