Home » Travel » 55 Years Ago Today, This Woman Became the First to Fly Solo Around the World 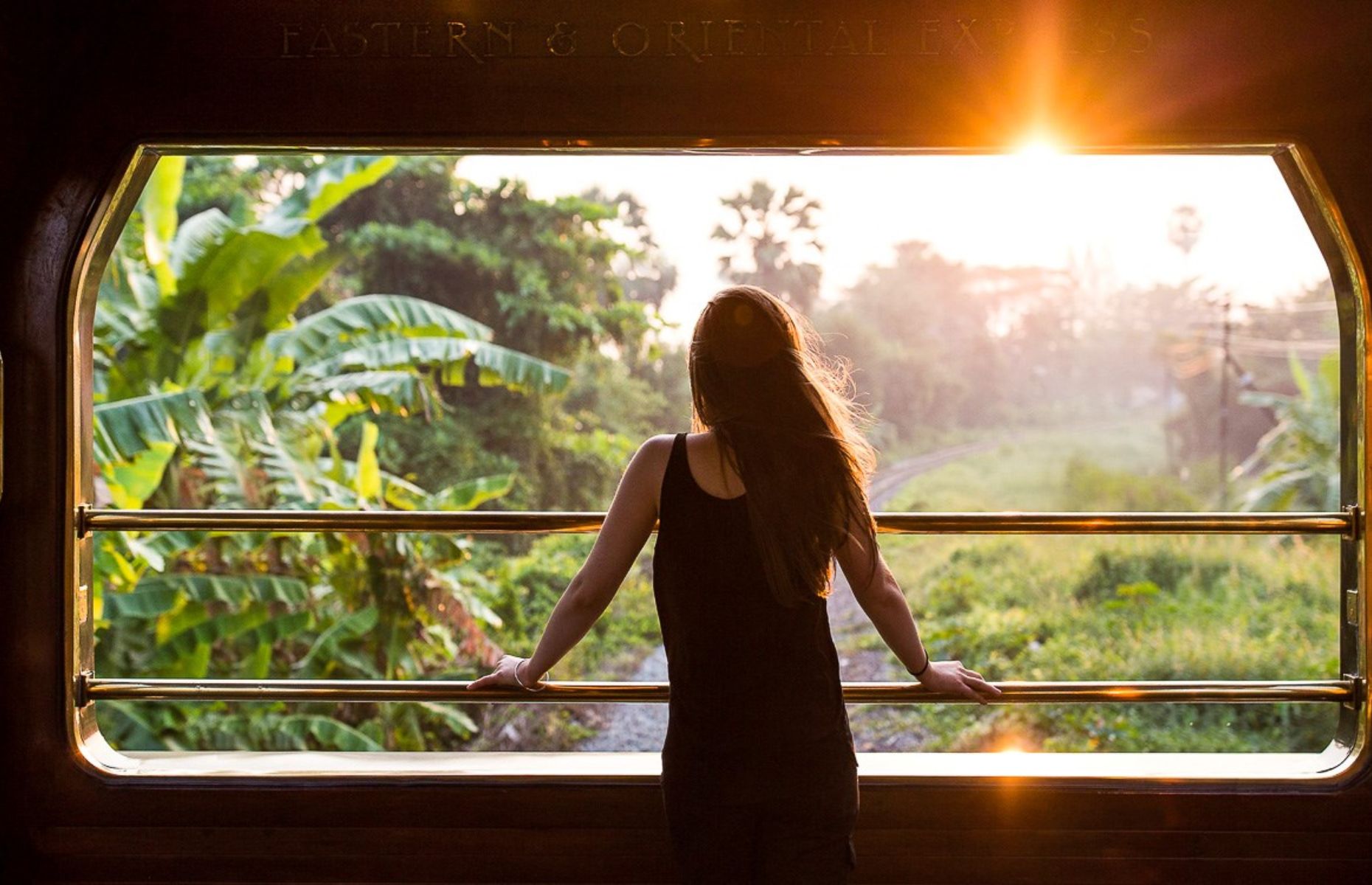 A flight in a Ford 5-AT Tri-Motor at the age of 7 was all it took for Jerrie to know she wanted to fly around the world (that, and ride a camel and an elephant.) Her dreams were ambitious for any child, but for “just a girl” living in a small town in Ohio in the 1930s, none of her dreams seemed likely to come true.

Still, she attended classes in high school and college that would lead her down the aviator’s path. But, as was typical in the 1940s, when Jerrie Fredritz met Russell Mock, she dropped out of college to get married. Three years later, her eldest son was born, and Jerrie Mock became a housewife.

Jerrie did interesting things with her life, filming the local college games, for example, but no matter how much she avoided cross-stitch, she grew discontent.

“I’m bored. I want an adventure,” she used to say.

So one night at dinner, when she was looking particularly dejected, her husband slammed his fist on the table and replied, “Well, then, fly around the world already!”

Together, they looked into aviation records and discovered no woman had yet successfully piloted her way around the world alone, then announced that Jerrie was going to be the first.

But just after Jerrie’s plans were announced, Joan Merriam Smith declared that she was pursuing that same place in the history books. Jerrie had 750 flight hours and an 11-year-old single-engine Cessna 180, plus three kids at home. Smith, on the other hand, had thousands of flight hours and a commercial pilot’s license. The media immediately latched onto the idea of a race between the two women.

Smith departed on March 17, 1964 — two days before Jerrie’s scheduled departure. Jerrie was content to simply make the flight, but with The Columbus Dispatch as her primary sponsor (with other companies like Champion Sparkplugs also funding the journey) she didn’t have much choice but to race against the other pilot.

On the morning of March 19, Jerrie and her family gathered on the tarmac at Port Columbus, where Charlie — her airplane — was being checked and double-checked before the flight. Her small suitcase, typewriter, food and tools were crammed into the plane around the additional fuel tanks, and she was ready to depart as the cameras captured shots of her in an unforgettable blue coat and heels.

Jerrie found her first time flying over the ocean a bit disconcerting. She was flying straight into the Bermuda Triangle before landing at her first stop along the nearly 23,000-mile route, Bermuda. She wondered if she would disappear like so many pilots before her. If she did disappear, what kind of fun would she have with the others on whatever mysterious hidden island where they had all been stuck for several decades?

Of course, she landed safely with only a slightly embarrassing bumpy landing in high winds. After waiting out bad weather in Bermuda for a week, she ventured on to the Azores. As she flew to Santa Maria, she began to lose altitude. The indicators all showed proper functioning, and the autopilot worked fine, but the plane was slowing.

Grabbing her flashlight, Jerrie peered into the darkness, trying to discover Charlie’s problem. The struts and wings were covered in ice — deadly for pilots. A Cessna airplane at that time had no deicing equipment and shouldn’t have been in this kind of weather, but she was out too far to turn back. If she dropped altitude to get beneath the clouds, she could have run into more severe weather. But if she stayed up there, Charlie’s whole system could have been thrown out of whack, and she could crash.

In a panic, Jerrie called in her request to the Santa Maria station. As she waited for clearance, she shot her flashlight beam out across the wings and saw that the ice had grown thicker.

“I have ice!” she reported, only to be told to stand by.

Jerrie finally received notification that she was clear to fly higher to get out of the icing conditions. She made it in time, but soon discovered that she was way off course. There were beacons indicating her basic position, so at least she wouldn’t get lost over the Atlantic, but her compass was off by 10 degrees. Without today’s fancy, modern equipment, Jerrie could only estimate her location, but she was found on radar by Santa Maria and finally landed.

Later that week, she flew to Casablanca, Bone and Tripoli before heading onward to Egypt.

As she approached the Cairo airport, Jerrie called in her position. As she drew nearer, the airport repeatedly asked for her location.

“Three-Eight-Charlie, what is your present position?”

“Madam, you are not in Cairo,” an officer with perfect English said, sticking his head into the cockpit.

Jerrie knew she had the right city, if not the correct airport. As it turned out, Inshas Egypt, the home of a secret base designed to mimic the Cairo airport, was only 37 miles away from Cairo’s airport, where she’d meant to land.

The men took Jerrie to the crumbling palace of the exiled King Farouk. The palace was filled with blue and white tiles, and the friendly soldiers were amused by the little woman from America. After spending most of the day dealing with red tape and watching television with the soldiers, she was released and flew onward to Cairo.

But as she left Egypt, her vision became blurred.

“The ground below seemed to be moving. I wiped my sunglasses. Everything still looked fuzzy,” she told me once. “I slowly began to realize I had flown into one of the sandstorms I had been warned about.”

Jerrie flew in the sandstorm (remember, this was before modern instruments) and hoped for a miracle. She braved the sandstorm for several hours until she reached Dhahran, Saudi Arabia, where the dust settled and she landed unscathed.

There, she was greeted by armed Royal Arabian Air Force officers, sent by Prince Faisal, and curious locals. The officers inspected her plane for the man who had been flying it. When Jerrie stepped out in her high heels and skirt, the throngs of onlookers cheered.

After Saudi Arabia, Jerrie traveled to Karachi, Pakistan, then on to Delhi and Calcutta in India and Bangkok, Thailand. But out over the middle of the South China Sea on the way to the Philippines, her engine started acting up, and it looked like she had to make an emergency landing. Of course, out here, she had no place to go.

But she quickly deduced that there was still Arabian sand stuck in the engine. She just had to help Charlie keep aloft until Manila without depleting all her fuel. She had maybe two hours at most. If the headwinds were higher than predicted, she was finished.

The sun set, and the moon and stars were hidden by clouds, so all she could see were the two red blinking lights on Charlie’s wings. There wasn’t even anything on the radio. She was completely and utterly alone out over the ocean.

Would this be the last anyone heard of her? My grandma wondered. Would her 4-year-old daughter remember anything except the stories of her crazy attempt to fly around the world?

Finally, there was a blip on the radio. Lubang was a way off still, but it was close enough that her antenna had picked up the faint signal. There were still no signs of people out there, no cities below or radio beacons beeping nearby, but then an airplane appeared, and she followed it to Manila.

From the Philippines, Jerrie flew to Wake Island; Honolulu, Hawaii; Oakland, California; and Tucson, Arizona, before returning to Columbus, Ohio on April 17. Smith had been delayed by setbacks and wouldn’t complete her flight for another 25 days. That meant Jerrie was officially the first woman to pilot her own plane around the world.

Along the way, Jerrie broke several records. She became a media darling and appeared on television shows like “To Tell the Truth,” and wrote a book about her flight, “Three-Eight-Charlie.” But she wasn’t done: She went back up in the air to break more records, including the longest distance flown in a straight line by a woman and several speed records. Then she retired quietly to her home in Bexley, Ohio, where she volunteered, read mystery novels and drank tea.

Once, I asked my grandma what she felt most proud of in her life.

“I had three dreams growing up,” she said. “I accomplished two of them.” (She never did have the chance to ride an elephant.)

She spent the rest of her life reliving those dreams and using those memories to inspire and encourage others to chase their own dreams. Though you may never have heard of Jerrie Mock before today, the legacy she wanted to leave behind was not one of glory but of fulfilling dreams. If she, a woman born in the 1920s in a small town could do so, anyone can.

Rita Juanita Pike is the granddaughter of Jerrie Mock, the first woman to pilot an airplane around the world. Inspired by her grandmother’s life and flight, Pike has pursued many of her own dreams. She now writes about travel, pets, faith and the arts.

Cheap and Deep: Tap Into the Arts and Get Outdoors in Bilbao, Spain

US Travel Association calls for CDC to lift restrictions on cruise industry, allow sailing to resume

The most dangerous countries in the world for 2021 revealed