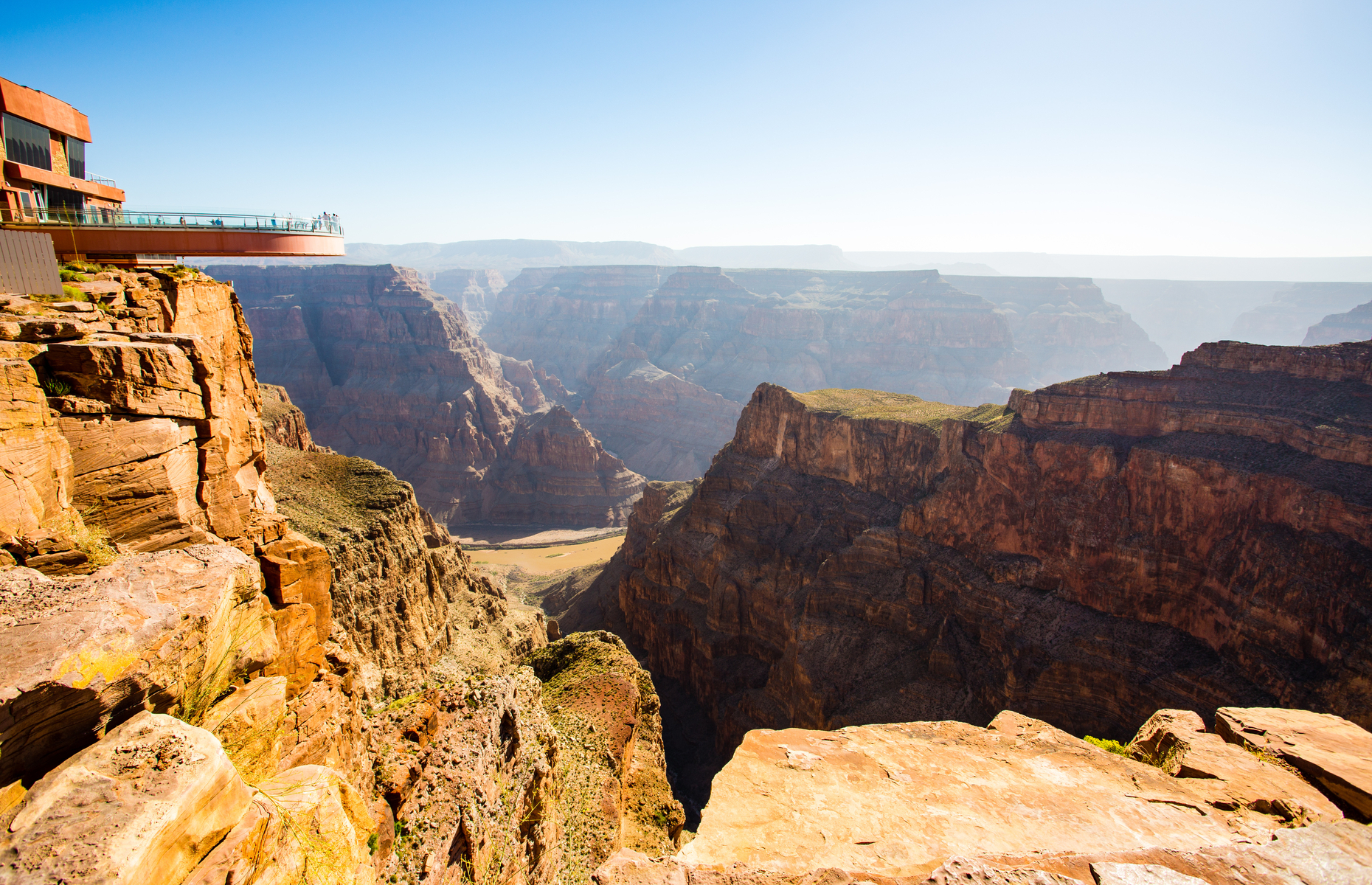 Are you afraid of heights? We hope not, because these 15 glass platforms offer spectacular panoramic views. Whether you’d rather gaze out at the city or the mountains, at nightscapes or sunlit scenery, you won’t regret taking that brave step when you see what’s under your feet!

The Shanghai World Financial Center is currently the seventh‑highest building in the world. The 100th-floor observation deck is 474 metres (1,555 feet) above ground and has three transparent glass-floor walkways that show you Shanghai from a whole new perspective.

Would you take a staircase to nowhere? The Dachstein Stairway to Nothingness is a glass staircase suspended 396 metres (1,300 feet) in the air. Fourteen steps lead down to a viewing platform with a breathtaking view of the Austrian Alps. The Dachstein glacier is located south of Salzburg.

More than just a platform, OUE Skyspace LA in California has a glass slide attached to the building’s facade. The slide takes visitors from the 70th floor to the 69th, 304 metres (997 feet) above the city. If you don’t have time to admire the view on your way down, you can also visit the observatory.

Ninety tonnes of glass were imported from Germany to build the Grand Canyon Skywalk. The first person to set foot on the platform was the famed astronaut Buzz Aldrin. Today, visitors can walk its length while admiring the views both around them and beneath their feet.

At the Oriental Pearl Tower, a radio and TV tower in Shanghai, the public can visit two observation decks at heights of 263 and 350 metres (863 and 1,148 feet) and dine in a revolving restaurant perched 267 metres (876 feet) above ground. There is a glass floor at the highest observation deck.

Built in 1882, Pennsylvania’s Kinzua Viaduct partially collapsed during a tornado in 2003. The bridge has since been reinvented as a pedestrian walkway, with stunning views of the Kinzua Gorge. Thrill‑seeking visitors can peer down through the glass floor. Admission is free, so what are you waiting for!

On the uppermost terrace of the Aiguille du Midi in the French Alps, you’ll find Step Into the Void, a glass room with a glass floor hovering over a 1,000-metre (3,281-foot) drop. Not for the faint of heart!

The CN Tower offers an exceptional 360-degree panoramic view of Toronto and a glass floor that looks down at the ground, 342 metres (1,122 feet) below. Adrenaline junkies can also try the EdgeWalk, an outdoor walk around the rim of the roof.

Chicago’s famous Willis Tower invites visitors to experience The Ledge, a balcony made of floor-to-ceiling glass. On a clear day, you can see as far as 80 kilometres (50 miles)—a view that spans four states! The Ledge is on the 103rd floor at a height of 412 metres (1,352 feet), and it’s a popular spot for marriage proposals.

Cliffwalk is series of walkways that look out over the Capilano River in British Columbia. Their highest point measures 90 metres (295 feet) above the river. Those brave enough can venture onto two glass platforms that offer views of the canyon below.

The observation deck of Blackpool Tower overlooks the Irish Sea and has a glass floor through which you can see the cars on the road below. You can reserve the space for special events and even spend the night!

The Eureka Skydeck boasts the highest view in the Southern Hemisphere. For an unbeatable view of Melbourne, a city that’s constantly evolving, step onto the glass floor and marvel at how it feels to be more than 300 metres (984 feet) above street level.

The Menara KL Tower in Kuala Lumpur houses the highest restaurant in Malaysia, at 282 metres (925 feet), and offers several other attractions. If you’re feeling adventurous, head for the Sky Box, an aptly named glass box with unparalleled views of the city from a height of 300 metres (984 feet).

The glass-bottomed bridge over the Zhangjiajie Grand Canyon is 430 metres (1,411 feet) long. A few days after opening in 2016, the bridge had to close due to an overwhelming number of visitors. It has since reopened.

As the name suggests, the 5fingers viewing platform has five platforms, and each has a different design. One of the platforms has a glass floor, allowing visitors to see the magnificent Austrian Alps under their feet.

2019 Travel Guide to Fall Foliage in the United States

Turner’s prized city: Lucerne is staging an exhibition of his work

Photograph of the week: Kruger sunset – A Luxury Travel Blog

Why these A380 superjumbos are flying empty out of Seoul

12 of the best burgers in Ireland: Beef up for National Burger Day