Kozhikode’s table-top runway was shortened by 150 metres to create a bigger safety area before the downward slopes, but it still is long enough under international regulations 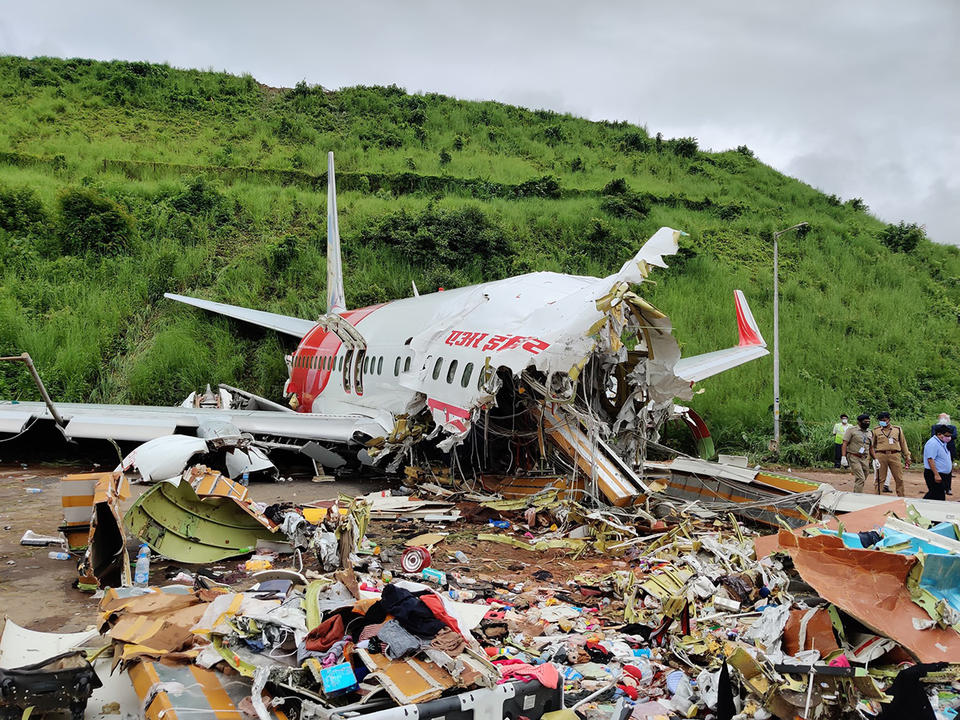 Flight 1344, operated by the low-cost unit of state-run Air India Ltd., was carrying 190 passengers and crew from Dubai to Kozhikode, the Keralan city formerly known as Calicut, in southwest India. Image: @HardeepSPuri

Weather conditions were within safe ranges and pilots were briefed about them by controllers just before the Air India Express jet they were flying crashed at a southern Indian airport Friday, killing at least 18 people and injuring more than 100, according to a person with direct knowledge of the matter.

The Boeing 737 appeared to touch down near the middle of the 9,000-foot-long (2,743-meter-long) runway at Kozhikode, the person said, before skidding off the end and careening down a slope, breaking into three parts.

The captain was experienced, with 11,000 flying hours, while the co-pilot had 2,000 hours. Neither one made a distress call, and both died in the crash. Visibility, precipitation and tailwinds were within acceptable guidelines for landing, the person said, asking not to be identified because the investigation is ongoing.

A playback on the FlightRadar24 website shows a first attempt to land the plane was aborted before another effort was made from the opposite direction. The flight-tracking site shows visibility at the airport was 1,500-to-2,000 meters, and winds were blowing at 12-13 knots, which is a moderate breeze on the Beaufort scale. Indian officials say 800 meters is sufficient visibility for landing.

Kozhikode’s table-top runway, so named because it sits on higher ground, was shortened by 150 metres to create a bigger safety area before the downward slopes, but it still is long enough under international regulations, the person said. He didn’t say when it was shortened. Most table-top runways in the U.S. and elsewhere have areas called arresting beds that stop planes from going off the edge.

Reached Kozhikode to take stock of the status & implementation of relief measures after the air accident last evening.

Flight 1344, operated by the low-cost unit of state-run Air India Ltd., was carrying 190 passengers and crew from Dubai to Kozhikode, the Keralan city formerly known as Calicut, in southwest India. Many were on the repatriation flight after losing their jobs because of the coronavirus pandemic. There was no distress call from the cockpit to the air traffic control tower prior to the 7:41 p.m. crash.

The flight-data recorder and cockpit-voice recorder, known as the black boxes, were recovered from the crash site for examination. Teams from the U.S. National Transportation Safety Board and Boeing will join India’s Aircraft Accident Investigation Bureau in the investigation, and an initial report could come in a few months, the person said.

A representative of India’s civil aviation ministry didn’t immediately respond to a request for comment.

A representative for Boeing in India didn’t have an immediate comment.

Investigators are looking at both human error and mechanical failure as potential causes of the crash, the person said.

The last major commercial aviation disaster in India was in 2010, when a plane — also a Boeing operated by Air India Express and flying from Dubai — overshot another table-top runway in Mangalore and burst into flames, killing 158 people. Investigators are looking into why there was no fire in Friday’s crash and are checking whether the aircraft’s engines were shut down, the person said.

One crazy summer: Travel advisors look back on a hectic season in Europe: Travel Weekly

The Best Insoles to Make Any Shoe More Comfortable, According to a Podiatrist