If Santa needs a nap after flying around the world on Christmas Eve, he might consider setting his sleigh down at Dulles International Airport and checking into a room at the Sleepbox Nap Lounge on Concourse A.

Scheduled to open in time for the busy Christmas travel week, the staffed post-security micro-hotel will be located between gates A6 and A14 and offer 16 small, stand-alone sound-proofed rooms (with no bathrooms or showers) that can be rented, via the Sleepbox website or app, for an hour or more, or overnight.

Average hourly rates will start at $25 and $35 per hour for the compact and standard rooms, respectively. Twelve-hour overnight stays are capped at $120 and $150. Discounts will be offered for those downloading the Sleepbox app, which is scheduled to be available on Dec. 7, company COO Peter Chambers told Today in the Sky.

TODAY IN THE SKY: First look: United shows off its first Boeing 787-10 Dreamliner at Washington Dulles 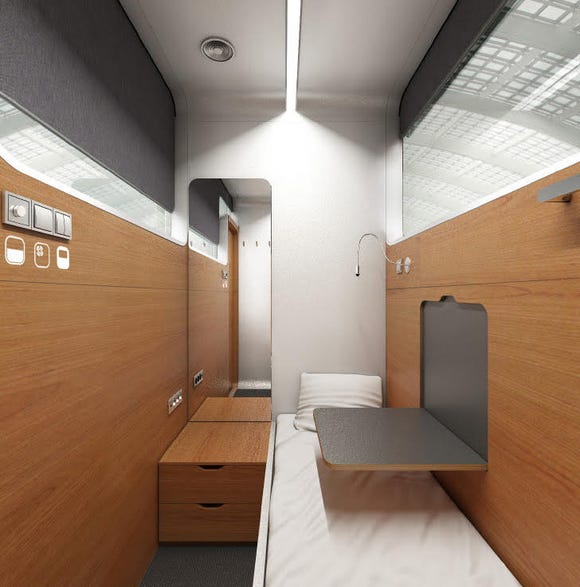 Guests will need that app for making reservations but also for setting the temperature and controlling the lighting options and the wireless entertainment system in their rooms.

Dulles is the first airport to get a Sleepbox micro-hotel, but Chambers says Sleepbox is already in talks with a few other large U.S. hubs for future locations, although he wouldn’t say where just yet.

Many U.S. travelers are already familiar with the airport napping concept from Minute Suites, which rents small rooms for sleeping, working or recharging at airports in Dallas, Philadelphia, Charlotte and Atlanta. Rooms have sound-masking systems, alarm clocks, HDTV with Netflix and DirecTV, and desks with chairs. Some locations offer showers as well.

TODAY IN THE SKY: JetBlue will drop Washington Dulles

TODAY IN THE SKY: United Airlines grows at hubs; new routes from NYC, D.C. and California

At the Atlanta airport, where Minute Suites currently has two locations, the company recently announced plans to open four new locations in 2019. Sixteen suites and two showers will open on Concourse E and six suites and one shower will open on Concourse F. Two branches (on concourses T and B) will be part of a “Traveler’s Oasis” concept along with Be Relax Spa and Chiroport, which offers 15-minute chiropractic treatments that include spine adjustments and trigger-point muscle work.

Harriet Baskas is a Seattle-based airports and aviation writer and USA TODAY Travel’s “At the Airport” columnist. She occasionally contributes to Ben Mutzabaugh’s Today in the Sky blog. Follow her at twitter.com/hbaskas.

TODAY IN THE SKY: United adds Israel route from its Washington Dulles hub

40 COOL PHOTOS: Planespotting, behind the scenes at Washington Dulles

Would You Spend $600 to Stay at a Hotel Run by a Fitness Center? Equinox Is Betting Yes.