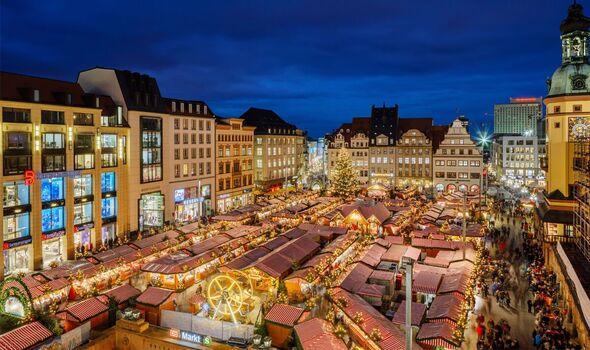 Leipzig regularly attracts thousands of visitors from across the world to its traditional Christmas market. It dates back to 1458 and attracts thousands of visitors every year, with around 300 different stalls to choose from. Thanks to a new Ryanair flight path between London Stansted and Leipzig-Halle Airport, it has never been easier to visit the beautiful East German city. On the short drive from the airport, visitors are greeted with views of wonderful historic buildings surrounding the city of 600,000.

The NH Hotel Zentrum is a stunning modern hotel, situated on the edge of the city centre, a mere two-minute walk from the Christmas market and a five-minute stroll to one of Leipzig’s most impressive open spaces – the Clara-Zetkin Park. It also overlooks the grand town hall, which is the tallest city hall tower in Germany at a staggering 114 metres.

After checking in, a stop at the Christmas market was in order. The smells, sights and sounds of the market can be experienced around the city centre, enticing visitors to bask in the holiday spirit.

The market opened on November 22 and will run until December 23, the day before Weihnachten in Germany. This was the first year the market was fully operational since 2020 after the Covid pandemic halted the festivities.

As with any good German Christmas market, the stalls were brimming with traditional food like Stollen and delicious Lebkuchen. Almost everyone on the market square clutched a green commemorative mug filled with glühwein – or mulled wine – made from white wine, as opposed to red.

The historic town hall is open to visitors, with some getting the chance to view the main market square from a balcony, presenting the perfect chance for views of the market at night.

The sounds of the carols could be heard through the streets, but another famous piece of music is often the highlight of Friday evenings – the Motette at St Thomas Church. The boys choir leads an hour-long procession of hymns as hundreds gather inside to hear the service.

A winter’s night can be capped off with dinner at Weinstock – a restaurant which is constantly reinventing the menu of fresh and seasonal dishes. As the name suggests, there was a wide array of wines to try, with the white wine being particularly impressive.

As mentioned, Leipzig has one of the most impressive track records when it comes to music and culture. A guided tour of the city showed this perfectly, with a who’s who of generational talent. The tour included a visit to the immaculate Gewandhaus orchestra, hosted by expert Dirk Steiner.

The concert hall will play host to the Mahler Festival in 2023, which will celebrate the life and work of composer Gustav Mahler, who spent two illustrious decades of his life in Leipzig. This is actually the third Gewandhaus and stands opposite the second Gewandhaus, which was destroyed during World War II, and has a capacity of 1,900.

Thanks to its design, crossing the “Ring” of the inner city can be done at a leisurely pace within a few minutes, with the Mendelssohn House being another popular attraction. The house of Felix Mendelssohn Bartholdy has been preserved and shows visitors how the legendary composer would have lived in his modest quarters and how the city helped further his creativity.

Small concerts are sometimes held inside the house, with the incredibly talented Simone Zimmermann giving a stunning performance of five of Mendelssohn’s pieces from “Songs Without Words”. Elsewhere in the museum is the “Effektorium” – an interactive conductor’s podium which allows guests to lead their own personal orchestra.

You also can’t speak about Leipzig without mentioning its history with art. The Museum of Fine Arts (MdbK) is an imposing cube building tucked behind some market stalls, with the architecture of the building being an art piece in and of itself.

TUI International Cruises are back

.Dreaming of your next cruise? Travel with TUI from only £740pp

This box contains affiliate links, we may receive a commission on any sales we generate from it. Learn more.

It houses thousands of pieces of art from virtuosos like Max Beckmann, Max Klinger and Claude Monet, to name just a few. The art ranged from the early 1600s, with numerous artistic movements and styles, up until the present day, with some incredibly thought-provoking modern art challenging the viewers at every turn.

When walking around Leipzig, it is almost impossible to miss one building in particular – the City-Hochhaus. The 142-metre-tall tower contains the highest restaurant in middle Germany, with diners at the Panorama Tower getting a glimpse of the city from a completely unique vantage point.

From one high to another, the Gewandhaus was hosting a charity concert with pieces from Jean Sibelius and Antonín Dvořák, conducted by Franz Welser-Möst. The “Leipzig hilft Kindern” (Leipzig helps children) concerts launched over 10 years ago and have raised more than €1.2million (£1.05million). The act featured a stunning orchestra and was capped off with a breathtaking violin performance from Nikolaj Szeps-Znaider. Truly incredible.

A trip to Leipzig would be incomplete without a visit to the Bach Museum, which gives visitors a glimpse into the life and work of Johann Sebastian Bach and his talented family. One of the highlights is the camera-free zone of the treasure chamber, which contains original Bach manuscripts and other precious artefacts.

Among the special exhibits include the organ console of an instrument examined by Bach himself in 1743 from the former Johanneskirche (St Johns Church). Also in the collection is a casket with relics from Bach’s tomb and a cash box which was recently discovered among the property of the Bach family.

The Christmas market on Sunday is still as busy as ever, but a calmness is present, with people taking more time to look at the exhibits and see what’s on sale. The rum hot chocolate was a particular highlight.

The wine bar-turned-restaurant contains a statue of the story, with Mephistopheles casting a spell on the students of the city, which has now become a good luck charm. And with a rub of the lucky foot, the weekend of Christmas celebrations and culture was over, with Leipzig forever ingrained in the memory of being a real-life winter wonderland.

For more information about Leipzig, visit Leipzig Tourism Board.

Flights from Stansted to Leipzig start from £12.99 on the Ryanair website.