If you’re looking for a luxurious city break, spend a few days taking in the sights and soaking in the spas of the Eternal City. From decadent dinners to designer shopping, Rome has it all.

BonAppetour offers more intimate dining experiences at some of the most unique locations in Rome, including the apartment on Via Margutta where Roman Holiday was filmed. The menu includes classic lasagna, roast pork with orange and grapefruit, and malakoff cream, as well as wine and coffee. You’ll dine on the terrace where many of the most memorable scenes in Roman Holiday took place, in one of the most picturesque parts of the city centre.

2. Shopping in Via Condotti

This street joins the main shopping street, Via del Corso, and Piazza di Spagna, and has some of the most exclusive designer shops. Dior, Louis Vuitton, Gucci, Armani, Hermes, Valentino, Prada and Dolce & Gabbana all have stores on Via Condotti, and if you’re worn out from shopping, you can stop for a coffee break at the historic Caffé Greco.

Unsurprisingly, one of the most luxurious hotels in Rome also has one of the most luxurious spas. The Hotel de Russie spa has a steam room, a Finnish sauna, and a salt water hydropool, while the wide selection of treatments includes massages and aromatherapy. There’s even an Ancient Roman treatment with a soothing foot bath and reflexology massage – perfect if you’re feeling weary after a long day of sightseeing. 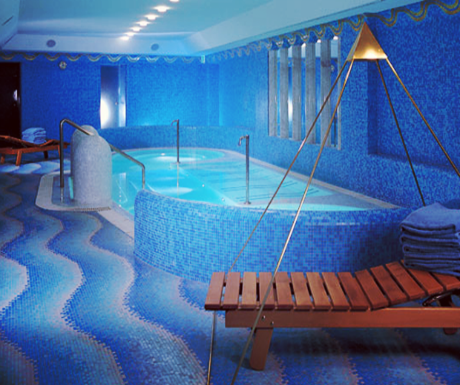 4. Be a designer for the day

Guests of boutique hotel G-Rough, located near Piazza Navona, can opt for an eclectic range of luxury experiences, including the opportunity to be a designer for the day. You’ll get to create a luxury leather handbag, choosing the leather yourself, with some help from an expert designer. Afterwards you can walk through Rome with your new creation slung over your shoulder – a unique souvenir from your Roman holiday.

5. Dinner with a view at a three-Michelin star restaurant

La Pergola prides itself on being one of the best restaurants in Italy. The elegant restaurant of the Rome Cavalieri Hotel is run by the award-winning chef Heinz Beck, and offers some creative twists on Italian cuisine, such as spaghetti cacio e pepe with shrimp, and duck ravioli with black truffle and foie gras sauce. In addition to excellent food and wine (take your pick from one of the 60,000 bottles in La Pergola’s cellar), the restaurant also boasts stunning views of Rome. Watching the sunset over the Vatican over dinner at La Pergola takes fine dining to a whole new level.

6. Sogni d’oro at one of Rome’s five star hotels

After a day of sightseeing, shopping and spas, you’ll want a good night’s sleep in one of Rome’s centrally located luxury hotels. For five star comfort and sogni d’oro (golden dreams), try the sumptuous St Regis, located in a Belle Époque palace close to Piazza della Repubblica, or the romantic Hassler, which overlooks the Spanish Steps. The Parco dei Principi Grand Hotel is near the beautiful gardens of the Villa Borghese, and has been voted the best European hotel with a spa.

Rosario Gorgone is Co-Founder of Through Eternity Tours.

Hand luggage: Always pack this in your carry on bag for a cruise ship holiday

Kate Middleton: Duchess travels with this many people in her entourage on royal visits