When I was a child, my family went on holiday in wine regions all the time. Not that my dad, a keen amateur wine lover, ever put it that way. As far as we knew, we were just going camping in various parts of France, Italy or Germany. It was only years later, as I caught the wine bug myself, that I realised how many of the campsites my parents picked – from Burgundy to the Rheingau – just happened to be in some of Europe’s most famous wine places.

Luckily for my incurious teenage self, wine tourism in Europe in the 1980s didn’t amount to much. For many producers, especially in France, members of the public were about as welcome as a tax inspector. I remember a trip to somewhere in, I think, the Loire where we saw a wobbly VHS film of vines in sunlight with a grandiose voiceover going on incomprehensibly about “nature’s handmaidens and Bacchus and patrimony”. But that was pretty much it. My dad was mostly just happy to be near some famous vineyards, drinking the absurdly cheap wines in almost-always-beautiful situ.

That would still be my favoured style of wine holiday: one of afternoons spent lazing around in a pool among the vines in, say, Portugal’s Douro valley, still for me the most beautiful wine country in the world. And of evenings getting to understand, in detail, how the local wines combine with the local food (autumnal Piedmont or Tuscany would win on this score).

Wine tourism is no longer the ramshackle affair it was. All over the world, wine companies have realised there’s money to be made and, equally importantly, valuable PR to be communicated to attract visitors in increasingly slick and varied ways.

Just how far along the path from farm to tourist attraction some wineries have come can be seen in the inaugural list, announced earlier this month, of the world’s 50 best vineyards. A spin-off of the 50 best restaurants jamboree, it attempts to identify the best wine-tourism destinations. It’s a list that leans towards the spectacular larger producer: a combination of starchitect-designed cellar and fine-dining restaurant is the formula taken by most of the winners, including the number one, Zuccardi, at the foot of the Andes in the Uco valley in Argentina.

These places can be fun to visit, in a Grand Designs/adult theme park kind of way. But they’re not enough to sustain a wine holiday itinerary on their own. To really get under the skin of a wine region you need a cluster of small, welcoming producers offering free tastings, a range of accommodation, restaurants, bars and other (non-vinous) cultural attractions, and good, easily available local information and maps.

The best places for this that I’ve come across are California (preferably in a Saab convertible, Sideways-style); Alsace (France’s best-developed wine route is perfect for cyclists); or the Alpine-vine gorgeousness of Switzerland’s Valais (the one for walkers). In their different ways, they are all easy pleasures to tour, no matter how serious your interest in wine, even if you have truculent kids in tow.

Six of the best 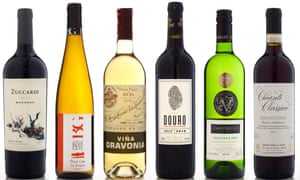 Zuccardi Serie A Bonarda, Mendoza Argentina 2017 (from £13.99, cambridgewine.com; henningswine.co.uk; oxfordwine.co.uk)
The recently named world’s best vineyard has a stunning, site-sensitive piece of architecture at its heart, some 1,100 metres above sea level in the Uco valley. A magical place to enjoy some of Argentina’s best wines, such as this succulent dark cherryish red.

Domaine Bott-Geyl Pinot Gris Les Elements Alsace 2016 (from £18.39, thevineking.com; butlers-winecellar.co.uk; ampswinemerchants.com)
Alsace was the first of France’s wine regions to take wine tourism seriously, and exploring the vineyards, half-timbered cellars and bistros along its wine route, while enjoying such luminously fruity and spicy wines as this superb pinot gris, is a bucolic delight.

Lopez de Heredia Viña Gravonia Crianza Blanco Rioja, Spain 2009 (from £22.99, harrogatefinewinecompany.com; cambridgewine.com; vinneuf.co.uk)
The old station quarter in the sleepy town of Haro has an amazing collection of famous rioja bodegas to visit, with the Zaha Hadid-designed bar/shop at Lopez de Heredia the place to try great traditional riojas such as this masterly oaked white.

Morrisons Red Douro Portugal 2017 (£7.50, morrisons.com)
With its steep stone terraces running down to a wide meandering river, the Douro’s natural beauty is second to none in the wine world. Its wines (as well as ports) are very good, too: this deep plummy-juicy red is a barbecue-matching bargain.

Camel Valley Bacchus Dry Cornwall, England 2018 (from £13.95, thewinesociety.com; camelvalley.com; averys.com)
Whether you’re in Sussex, Essex, Kent or Cornwall, a trip to a local winery can be part of a traditional English seaside holiday. Camel valley’s tour scores high for natural beauty and the quality of wines, such as this fragrant sauvignon-esque white.

Berry Bros & Rudd Chianti Classico by Badia a Coltibuono Tuscany, Italy 2016 (£15.95, bbr.com)
For all the rampant touristification, Chiantishire remains one of the world’s food and wine hotspots, with Badia a Coltibuono’s resplendent monastery combining a guesthouse, a traditional restaurant and gorgeously graceful sangiovese reds.

Thanks to a New Generation of Creatives, Mallorca Is Shedding Its Party Reputation

A New Decade in Travel ·