Home » Holiday guides » ‘Why did white men get all the fun?’: the long road to diverse travel writing

I was born in London, to Indian parents who grew up in apartheid-era South Africa. When I was seven we left Wimbledon for a tiny village in the Laurentian mountains, in Quebec, where our back garden was a wilderness. A year and a half later, we moved again to Montreal and the St Lawrence river flowed at the end of our suburban street. As a child, there was never a moment when I didn’t dream of becoming a writer, or of travelling abroad. But I never saw or read about anyone like me, a small, brown woman, going off and doing adventurous things. I’d see those men – and it was always men – in books and on TV and I’d wonder how they made these things happen. Why did they get to have all the fun? Becoming a travel writer was the dream, spending time in wild landscapes too – for me there is not a great schism between travel writing and narrative nature writing, at least the kind I now enjoy reading.

Long before I even thought it possible to write professionally, I’d make frequent visits to the holy of holies, Stanfords Travel Bookshop. Here I’d trawl the shelves, desperate to read about someone, anyone, who looked like me, or looked at the world through a prism other than the prevailing one. I can still recall my delight when stumbling upon Eddy L Harris’s Native Stranger: A Black American’s Journey into the Heart of Africa. I was fascinated: here was a man with black skin who was seeking to know himself better while roaming in the land of his ancestors. As he put it: “There is a line that connects the place we come from and the place we find ourselves, those lives and our lives. And I longed to follow that line.” This was very different from the escapist, “hero lit”, travelogues written by white men who wrote about the people they encountered and landscapes they traversed as though mere backdrops to their adventuring prowess. Though Harris’s background and experiences were different from my own, they felt infinitely more relatable.

When I read Pico Iyer’s 1988 book Video Night in Kathmandu, about his travels in Nepal and exploration of the Americanisation of ancient civilisations, I remember thinking, how did he make that book happen? I think I was more interested in how a man like him even got published than in the narrative itself. He wrote of having become accustomed to “cross-cultural anomalies and the mixed feelings of exile” in his life. When I read this, in my twenties, I’m sure I’d have nodded hard. Here was someone who had been born in England (like me), was of Indian descent (tick), and now lived in California (I was in Montreal). OK, he wasn’t an Asian female – the possibility of a woman with brown skin writing that book, at the time would have been so unthinkable as to be in the realms of of fantasy – but you can’t have everything. His words went deep and I didn’t feel I was on the other side of a glass wall.

Later, I read Azadeh Moaveni’s 2007 memoir Lipstick Jihad: A Memoir of Growing Up Iranian in America and American in Iran. In it, she wrote: “Being a Persian girl in California, it turned out, was like, a totally different thing than being a young Iranian woman in the Islamic Republic of Iran.” Here was a woman who had worked as a journalist for Time magazine in Tehran for two years. She was different (like me) and yet she had achieved this impressive career.

Eventually, I made my own way as a travel writer. Yet, whenever I have been about to set off anywhere, I can’t help but wonder: how will I be received? When travelling, I often experience what I’d describe as “hypervisibility”: it’s there in the barely suppressed look of surprise I’ve seen on my host’s face because they’ve never seen a travel writer who looks like me. In India, I have the disorientating feeling of – for once – looking the same as everyone else, and yet culturally being neither of the place, nor not of it. My mother cooks Indian food, though not always, my father, when he was alive, listened to Indian classical music and read Indian literature, but not exclusively.

But there are positives too: sometimes the bonds have been formed more easily because local people don’t see me as a threat to their culture – there is no whiff of colonialism, however distant. I’ve noticed this on the occasions when I’ve met people from indigenous cultures, for instance in Queensland, Australia, and in the Kalash valleys of northern Pakistan. There was a relaxed friendliness and a lack of formality, confidences shared, no deferential lowering of eyes.

As I pursued my career, my interest became focused on landscape and nature: I’ve always been drawn to the belief, common in indigenous cultures and among those of nature-based faiths, that it is possible to enter into a reciprocal and meaningful relationship with an animate nature. So when I came to write Wanderland, I set off in search of the magical across British landscapes. I had intriguing experiences in all corners of the land: in Herefordshire, for instance, with a follower of the Old Ways; on Iona in the Hebrides, when seeking a mysterious land temple; or in Sussex, following a “treasure map” to hidden healing springs.

During my year’s journey around the UK I found myself compelled to explore my own experience of otherness. That feeling of being on the hard end of curiosity or suspicion or of feeling vulnerable is not unique. If you’re a woman you can feel uncomfortable when a man sidles up and wants to strike up a conversation, or if you have an accent that isn’t local. But your skin colour marks you out from the word go, before you’ve uttered a word. You are defenceless. 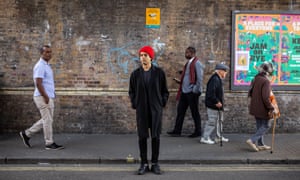 Do I see any of these nuances reflected in today’s writing? Well yes and no. It is still a struggle to find travel literature by British authors of colour – Monisha Rajesh’s Around the World in 80 Trains (and before it, Around India in 80 Trains), Noo Saro Wiwa’s Looking for Transwonderland about her travels in Nigeria, Johny Pitts’s Afropean, and Gary Younge’s No Place Like Home: A Black Briton’s Journey Through the American South, spring to mind. But when your interests veer towards the eco-spiritual, that thins out the field even further. Reflecting on some of the narratives that first drew me in, I think, for example, of Charlotte Du Cann’s 52 Flowers That Shook My World, Jay Griffiths’ Wild, Eleanor O’Hanlon’s Eyes of the Wild, Eliot Cowan’s Plant, Spirit, Medicine, and Braiding Sweetgrass by Robin Wall Kimmerer, a botanist and citizen of the Potawatomi Nation. I also loved Cheryl Strayed’s Wild and Felicity Aston’s Alone in Antarctica, both outdoors memoirs. (I’m drawn to contemporary nature-writing by Melissa Harrison, Robert Macfarlane, Richard Powers too.) But aside from Kimmerer, none of these authors are from marginalised backgrounds in terms of race.

Robin Wall Kimmerer: ‘People can’t understand the world as a gift unless someone shows them how’

There are more ethnically diverse narratives. Jessica J Lee is a British Canadian Taiwanese writer and founding editor of the Willowherb Review, a literary journal dedicated to diversity in nature writing. In Two Trees Make a Forest she travels to Taiwan and traces the lives of her maternal grandparents. On my to-read list is also Elizabeth Jane Burnett’s memoir The Grassling (her mother is Kenyan, and her father from Devon), and beyond Britain, there is Antiguan-American Jamaica Kincaid’s My Garden, Malaysian-Norwegian Long Litt Woon’s The Way Through the Woods and British-Canadian-Japanese Kyo Maclear, who has written Birds Art Life from an urban perspective. (Where are the contemporary Indian nature narratives, I wonder?) The world is changing and the book industry is waking up. My hope is that nuanced narratives that go beyond the narrow confines of genre and tradition will begin to flourish, allowing fresh voices to be heard. Here’s to Decolonisation Lit and eco-spiritual lit meeting travel and nature lit.

Holidays 2021: Will France, Spain and Greece be on green list?