In Japan it’s called shinrin-yoku (forest bathing); in Norway it’s friluftsliv (appreciation of outdoors activity and nature). But in Latvia there’s no special term for it. “We don’t need one – this is just normal behaviour for Latvians,” said Sigita Klētniece, our walk leader in a crisp, cold Gauja national park in the country’s north-east. 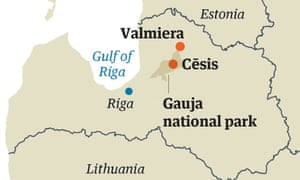 We stood and breathed deeply, as light dappled through the snow-speckled pines. “Let being in the forest relax you,” said Sigita. “Listen to the sounds and sense nature around you.”

It felt like the forest was a spiritual place, where Latvians came to meditate.

Latvia is one of Europe’s greenest nations. Forest covers about half of the country (in the UK, it’s 13%). And this vast swathe of trees – over three million hectares of conifer, birch, white alder and aspen – has more than doubled in size since the 1920s.

My own foray into these immense woodlands was a four-day tour of the Vidzeme region, which covers central and northern Latvia. Despite being home to the capital, Riga, Vidzeme is characterised by forest, rolling hills (including Mount Gaiziņš, Latvia’s highest point at 311 metres), morainal lakes, the cliff-lined Gauja River and historic towns with medieval castles. It is a proud region, known as the “cradle of Latvian culture” for its rich artistic heritage.

I was on a short small group tour of the country with guide Amanda Kokoreviča of Experience Baltics. The forest was captivating: quiet trails among soaring trees and abundant wildlife. Equally fascinating were the people we met: the local pioneers using Latvia’s forest to create a new wave of green tourism and eco-friendly business. 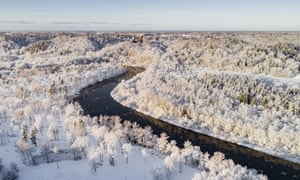 Latvia’s tourism board is fully behind this shift. It wants to encourage visitors away from Riga, which is popular with both rowdy British stag-dos and city breakers enticed by the medieval old town and art nouveau architecture. It wants tourists to use Riga as a launch pad for trips into Latvia’s green lands for bird-watching, forest hiking and bog walks.

“It’s such a shame many tourists are in a mad rush, visiting Latvia, Estonia and Lithuania in just a few days,” said Amanda, as we arrived at Mālpils , a classical 19th-century manor with baroque-style grounds and now a design hotel and restaurant. “But things are changing – people are becoming more interested in Latvia’s nature.”

The next day, after lunch at stylish Cafe Zeit, housed in a former Soviet factory, we arrived at the Woodcraft Museum in the riverside village of Līgatne. Ponytailed proprietor Rihards demonstrated how he makes bowls using locally harvested wood and traditional techniques. Even the peppermint leaves floating in my tea cup were from the local woods. 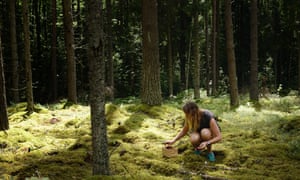 Forest foraging is almost a national sport in Latvia, with mushrooms, berries, herbs, leaves for tea and birch sap juice on the menu. With half of the nation’s forests state-owned, and favourable public access laws, filling your basket is completely legal. Families are even permitted to take one Christmas tree from the forest every December. As we checked in that evening at HE Vanadziņš – a contemporary restaurant and hotel next to Cēsis’s old town – I wondered whether the owner had personally felled the tree decorating the reception.

“My grandmother taught me how to forage,” said Sigita the following day, as we set off on foot past sandstone cliffs into Gauja national park – the oldest and largest of the four in Latvia. “And we pass on that knowledge and passion to our children.”

Biking the Baltic: a cycle tour from Vilnius to Tallinn

Sadly we had missed the August-October mushroom season, but the forest still provided. While we picked wild cranberries, a family with a young daughter collected pine cones for a Christmas wreath and others filled large containers with spring water. This closeness to the forest is rooted in Latvia’s history: for centuries the forest has represented safety and security for Latvians, particularly in the 1600s and 1700s when people fled to the woods during conflicts between the Russian, German and Swedish empires. 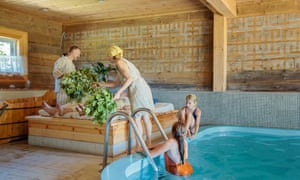 That afternoon, as we explored the towns of Cēsis and Valmiera, the Latvian love of nature was still clear. At Valmiermuiža brewery a “forest cola” – made with cranberries, pine blossom and heather – was lauded as a new children’s drink, while at Veikaliņš, a pop-up shop selling handcrafted produce from 35 creatives, the shelves were stocked with items such as biodegradable reed straws and textiles made from recycled linen.

“Thanks to the younger generation, more and more Latvians are buying ethically sourced, eco-friendly goods,” said Lelde, the shop’s founder.

Jānis, a moustachioed ice-cream maker from near Dunte, echoed this when we visited his farm. “Latvians love local produce,” he told us, as we tucked in to his Gogelmogels ice-cream. He gets milk from his neighbour’s cows, eggs from his own chickens, and flavourings such as sea buckthorn and bee pollen from his fields. 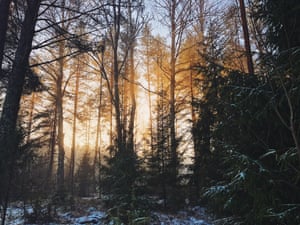 Later I headed for the sauna at Lantus, a farmhouse where guests can experience a traditional Latvian bathing ritual. This turned out to be a part-aromatherapy part-massage treatment: the masseur covered my face with pungent eucalyptus leaves before pummeling my body with leafy twigs of birch and oak.

Half an hour later I emerged from the sauna, covered in leaf fragments. “Your body and soul should feel cleansed,” said Amanda, glowing from her own treatment. That sums up what the forest means to Latvians.
• The trip was provided by the Investment and Development Agency of Latvia (latvia.travel). Cesis Inside does guided trips in Gauja national park from €7pp; Experience Baltics has activities in Riga and countryside from €15pp

Money Saving Tips: Where to Go and When to Book Spring Break Travel

The Kent safari park where you can sleep next to LIONS