I stand at the end of the concrete slipway, looking out over a mercury-like sea. A seal pops its head through the surface before slipping back into the Hebridean waters. Low clouds hang with all the weight of Harris Tweed and the late July dusk illuminates the craggy coastline surrounding the small harbour.

At my back is the house of Kenny and Moira MacKay, who are in their 80s. I imagine the pair looking out on a similar, but forever dynamic view over the preceding decades. Over the years little has changed inland either, except for one additional feature – a strip of tarmac road that drops steeply into the village of Rhenigidale (or Rèinigeadal in Gaelic). This road was built in 1990, making this small group of houses on the east coast of the Isle of Harris the last in Britain to be connected by road.

I was here with two other mountain bikers (plus a photographer and cameraman) to ride the spectacular path that Kenny, the former village postman, used to walk three times a week – between Rhenigidale and Tarbert – to deliver mail, news, supplies and more. Known as the Postman’s Path, this singletrack is regarded as one of the best and most spectacular mountain biking rides in the UK. Invitation in itself, but I also wanted to talk to Kenny and find out more about the track, his experiences and life in the community. I ended up leaving with more than that, having gained a deeper understanding of the value of connections – both physical and emotional – in our world. 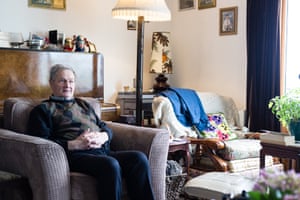 The Postman’s Path from Rhenigidale to Tarbert, a small village by any standards, is around 10km, wiggling through the landscape with a series of dizzying switchbacks and steep gradients.

To drive there, though, the A859 – the backbone of Harris – swings inland. It passes under the foreboding Clisham, the highest peak on the island. The weather closed in as we drove, and staring out of the rain-lashed van window the hillsides looked remote, bleak and largely empty of life, save for the odd sheep sheltering behind a rock. We turned right and along the road that Kenny had campaigned vociferously for since the mid-1970s, descending then climbing once more through a cleft blasted out of bedrock to make way for this single lane of tarmac. The road that saved the community. 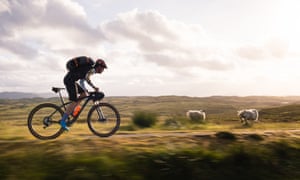 Sat in Kenny’s living room, tea brewing and listening to the rain against the window, I wanted to learn what Rhenigidale was like before the road. Kenny talked about the closeness of the residents, the way they helped each other and shared responsibilities, keeping the village alive.

“The main benefit of it being isolated was that we all worked together and helped each other. No one was any better than their neighbour.”

When there is no shop, doctor or pub, community is central. Both Kenny and Moira spoke of old times with fondness but no sentimentality. Day-to-day living was hard. It’s a mark of Rhenigidale’s remoteness that farming on the Isle of Skye was thought of as a move to the bright lights. The postman played a central role far beyond delivering the mail. On any given day his bag would carry not only letters from loved ones but also medication and news of the outside world. For 20 years, Kenny was the connection. And it was from this position he could see that something had to change. 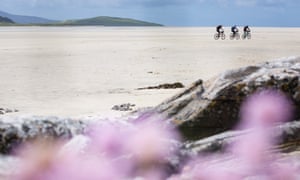 Kenny spoke quietly. He was quick to find humour in his decades of campaigning, recalling the time a new postmaster suggested he get a van to make his round more efficient (“I’ll need a road first!”) but also keen to spell out the gravity of the village’s position. By the 1980s, only four houses remained inhabited. Those that stayed lived a strange existence. Despite or maybe because of their isolation, they were increasingly dependent on others. If they fell ill, a helicopter rescue was necessary. Simple deliveries of food were challenging and dangerous as boats struggled to navigate rough seas.

As we chatted, I flicked through the hundreds of newspaper clippings that the couple had saved, charting the history of the campaign: the false starts and politics, the never giving in. They didn’t dare believe it would happen until the day the road opened. But it did, on 20 February 1990. And with it, Rhenigidale was sustained, yet somehow a different place. The postman’s path was stripped of its purpose, but it remained, ready for those who chose – rather than needed – to travel it. 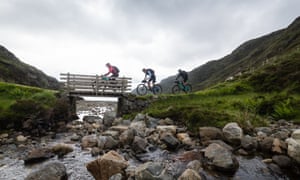 We started riding from Rhenigidale, climbing tarmac for 100 metres before turning on to a track just wide enough for single-file footsteps or cycle tyres. With the coast to our left, the track contoured above cliffs and around small coves. I stared down through the still and clear sea, strangely calm despite the brooding weather. I passed through the remnants of the long-abandoned buildings of Gèarraidh Lotaigear, just a few hundred metres from the start of the path and once home to the only shop in Rhenigidale.

For anyone who’s spent time in Scotland’s highlands and islands, it’s a familiar sight. Footprints of subsistence farms and villages are scattered across the country, marking where communities were lost to the Clearances of the 18th and early 19th centuries, when landowners evicted tenant farmers. The story is more complex here: Rhenigidale expanded due to the Clearances, then shrank in the late 1800s as residents emigrated to Canada. It takes little imagination to picture the buildings’ former inhabitants walking to the bay to fish, or to streams to collect drinking water. I was riding not just in Kenny’s footsteps but in those of generations of communities who made a successful – if hard – living all along the coast. 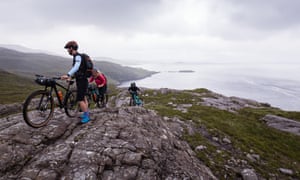 Squalls of rain punched free of grey clouds, blustering winds throwing the water down with more venom each time. I hate to think of the conditions that Kenny endured, but endure them he did. Perhaps he carried a greater weight than the sack of mail, in the knowledge that this path was such a lifeline.

Only once, in all his years, did the weather get the better of him: “There was a horrendous storm and I hadn’t got very far, but I got blown off my feet, so I turned back home.”

I ignored the sting of rain against my bare legs and kept pedalling. The descent to the head of Loch Trolamaraig is steep and switchbacked, ending at a wooden bridge across a stream. Even after hours staring at the map of Harris, I got confused by a topography that is dominated by lochs, lochans, and huge sea inlets as it is land.

We paused at the small bay, aware that our next task was to shoulder our bikes and hike up and out. An fhaolainn, or stony beach … there are more than 100 place names covering the area from just north of Rhenigidale to just south of the bay. Most are descriptive: the Big Ledge (Am palla mòr) and the White Waterfall (An eas gheal). Others point clues to the people who called this area home: Nostar’s big pasture (Geàrraidh mhòr Nòstar) and the Little Woman’s Bothy (Bothag a’ Chreabhag). A few ask more questions than they answer: the Ridge of Disgust (Druim a’ ghràin) and Fair Rock of Judgement Hollow (Creag bhàn lag a’ bhinn). When your known world extends not much further than the eye can see, it makes sense that every feature has a name and is known intimately by all.

The climb didn’t take long. The whole ride was barely 5km of off-road between tarmac, with another 3km to Tarbert. Far enough when carrying a mail sack through winter storms, though. We left the coast briefly and crossed a bleak headland, always turning, following the singletrack that sought out the easiest path through the rocks and bog. Riding the track was worth it in its own right – but, like Kenny’s post bag, it carried with it a greater weight. We all felt an affinity with Rhenigidale’s story as a result of riding the trail.

Usually I try to avoid out-and-back rides, always keen to see something new. On this occasion, nothing else would have felt right. We doubled back and returned, just as Kenny would have.

• Kenny MacKay’s book, Rhenigidale, about the village’s fight for survival, is available on Amazon (£12)

This is an edited version of an article that first appeared on sidetracked.com, @Sidetrackedmag

Flight attendant arrested after passenger alerts United: She ‘appears to be quite drunk’

Why Leipzig is Europe’s coolest city for design

The world's most stunning national parks captured on camera

Cuba Re-Opens With No Quarantine Required

easyJet takes off for Paris Charles de Gaulle from Stansted