I was heading to the Northwest Angle – the northernmost point of the continental US – to research a book about the country’s northern border. The Angle is a blip on the boundary – an isolated pocket in Minnesota set 100 miles north of the line of the main border. It is the northland of the northland – surrounded by Lake of the Woods on three sides and Canada on the other. To get there by road, you have to drive through Manitoba.

It wasn’t supposed to be that way. The Angle was a mistake, made at the time of the Treaty of Paris, the accord that ended the American Revolution in 1783. The map that the delegates used, made by a London physician-botanist and amateur mapmaker named John Mitchell, marked the source of the Mississippi, a key landmark on the proposed northern boundary, as 150 miles north of where it actually is. 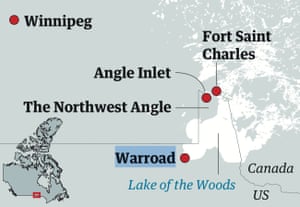 Negotiations continued nonetheless, and the line was drawn. When the Treaty of Paris was signed on 3 September 1783, US sovereignty was acknowledged by Britain; all British influence was abolished; British protection of American interests around the world was lifted; confiscated Loyalist property was to be reinstated; and the US’s northern border was set from the north-west corner of Lake of the Woods to … nowhere.

Five miles north of Warroad, Minnesota, I pulled up to the Canadian border. A stern, blue-eyed agent asked where I was going, if I’d been there before and how I’d heard about it. I said I was going to Angle Inlet, and he handed me a piece of paper that read, “Phone Reporting from the Northwest Angle”. A map at the top of the page showed the Angle’s north–south boundary. Three bubble quotes with telephone icons on them read Carlson’s, Jim’s Corner, and Young’s Bay.

I was to report in from Jim’s Corner, he told me.

I followed Route 12 – known as Mom’s Way – through Manitoba to an abandoned gas station where the agent had said to take a right. I did and fishtailed onto a dirt road. Thirty minutes later, the road crossed back into US territory, and I spotted four older men huddled next to a phone booth at an intersection.

The men looked at me, then at each other. “We’re wondering the same thing,” one said.

The group watched as I picked up the phone and pushed a button with an American-flag sticker on it. After a couple of rings a voice answered, “US Customs and Border Patrol.” The agent ticked off a list of ambiguous and prying questions. “What are you doing? Where are you going? Why are you going there? What kind of fish are you fishing for? Have you ever caught one of those before? How do you cook it? What does it taste like?” Satisfied, the agent said I was checked in, and I left the old men, still huddled by the booth. 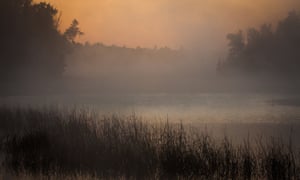 The Northwest Angle is 80% water. The other 20% is a rectangle of land that juts into Lake of the Woods. Angle Inlet, on the northern shore, is the only town. The population as of 2010 was 119. I drove past a few houses, a one-room schoolhouse, and a general store that opens daily from 4.30pm to 6.30pm. A hundred yards past the greens of a five-hole golf course, a sign pointed to a hotel called Jake’s Northwest Angle. Another sign, on the office door, read: “Ring the pager (it works).” I did and Jake’s grandson, Paul Colson, drove up in a golf cart. He looked like a backwoods Chevy Chase – handsome, with short-cropped brown hair, a dimple on his chin, a smirk on his face. He was wearing sweatpants and a baseball hat and flipped the pager in his hand as we spoke.

Paul’s grandfather had pioneered the Angle and built three of the six cabins at the resort. The old man had also built the road I had driven in on and half of the town. Paul’s boys grew up going to Angle Inlet School, the last one-room schoolhouse in Minnesota, until the sixth grade. After that they had to commute 65 miles to Warroad. Paul had spent the past 20 years fighting US and Canadian authorities who cut off access to hospitals and schools, unfairly taxed Angle residents and changed fishing and guiding regulations on Lake of the Woods, where most residents earn a living. The town has tried to secede from the US several times. The last effort was in the 1980s. The hassle of living in the Angle has kept families from moving there, and the community is slowly dying. “You gotta think how much longer we can keep doing this,” Paul said.

A deep inlet lined with tall reeds connects the resort to Lake of the Woods. A light breeze rustled the grass and cooled what was becoming an extraordinarily hot day for late September. We’d been talking for 20 minutes before Paul asked if I wanted a room at the resort. I told him I’d be there for a night, and he tossed me a key and nodded to a cabin behind the office. “The AC works,” he said.

I spent most of the afternoon reading about the Angle. After British explorer David Thompson discovered the actual headwaters of the Mississippi in 1798, it took nearly a century for US and British Boundary Commissions to survey it. It wouldn’t be marked until 1912.

Five years later, in 1917, Jake Colson and early settlers of the Angle arrived. Back then, the drums of the Ojibwe tribe reverberated through the forest. Jake found what he described as a Shangri-la overflowing with fish, game and wild rice, and a wilderness few non-native Americans had ever seen. He settled down with a cow, a few chickens and a garden. The Ojibwe called him Pohzhash, meaning “big Indian”. He met his wife when his sister arrived for a visit with a friend. The couple lived in a tent until they finished their first cabin. They fished, logged and harvested marsh marigolds to survive. Jake worked as a hunting and fishing guide in the summer and saved money until 1945, when he built a few guest cabins. 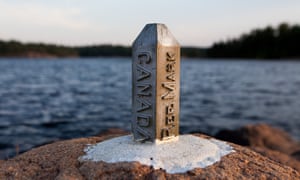 Without a road to the Angle, business at his resort – accessed only by boat – was slow. Jake added an electric generator and running water. He helped build the town’s post office and acted as its first postmaster. Then he got permission to build a connector road to Canada’s Route 308, which runs north from Mom’s Way. When fishermen left in the summer, duck hunters arrived; when the hunters left, ice fishermen came.

CB radio was the only form of communication. Jake’s black-and-white Zenith television could pick up one channel, from the Canadian Broadcasting Corporation. To deliver a baby or have a broken bone set, the family would drive 130 miles to Winnipeg. There was often a delay at the border as customs agents tried to figure out which country Angle Inlet was in. The telephone finally arrived in 1991.

Paul knocked on my door the next morning to ask if I wanted to go fishing. Lake of the Woods is 1,700 square miles, and fishermen pay Paul $500 a day to make it a bit smaller. I grabbed my jacket and we walked to his boat. Paul’s wife, Karen, came along. Paul, in camo hat and sweatshirt, sat sideways with his legs crossed, one hand on the wheel, the other tucked under his knee. He chatted with Karen about their kids’ homework. Internet could be spotty in the Angle, and one of the boys had had trouble emailing a paper to his teacher. Karen held her phone over her head trying to get service and eventually managed to reach the teacher and get her kid off the hook.

We passed Fort Saint Charles, a French Canadian fur-trading post built on an island in 1732. A trader named Pierre La Vérendrye had built the fort with his sons, before going on to explore and claim the western half of Canada for New France. The fort, reconstructed with new logs and asphalt shingles, sits on the US side of the line now, and an American flag flew behind the log palisade.

There were no boundary markers on the lake as Paul crossed into Canada. We sailed past some long slabs of granite on the shores of Bukete Island and pulled into a bay whose location he made me swear not to reveal. He handed me a fishing rod, drove a hook through the head of a minnow, and tossed my line overboard. He did the same for Karen and himself, and they cast their lines off opposite sides of the boat. Ten minutes later we had eight fish packed in a cooler. 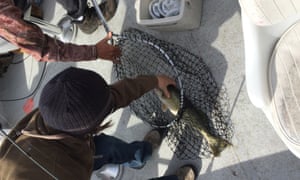 Paul looked at his watch, and said we had to get back to meet the school bus. Back at the dock, Karen hopped off and headed home to meet the kids. Paul asked whether I wanted to join the family for fish tacos but I had a flight to catch in Minneapolis that night.

He was already dropping fillets on the grill as I drove out. I headed west, past road signs riddled with bullet holes, while a few commuters drove by on their way home from Warroad. The dirt road that Jake Colson had cut

The road ran straight and smooth for 15 miles. I thought about the old man and his neighbours chopping their way through the dense forest. It must have taken thousands of man-hours, hauling brush and removing stumps. I figured Jake would be proud that his grandkids drove the road twice a day now, following the dusty finger from the Angle, through Canada back to the US.

25 Instagram Captions For Christmas Candles To Make Your ‘Gram Glow

9 Road Trip Survival Tips From Parents Who Have Been There

Holidays: What Britons wanting an autumn or winter holiday must do this year