Let’s start at the end. On 14 June 1870, the body of Charles Dickens was lowered into Poets’ Corner in Westminster Abbey, watched by perhaps a dozen mourners. His friend, Wilkie Collins, was among them, but there was no place for Dickens’ estranged wife, Catherine. Dickens had wanted to be buried near his home in Kent, with no fuss, but he’d lost control of his own story. He was 58 years old – and the brass lettering on his black tombstone still glows with unquenchable force.

Dickens loved to walk, at speed, often through the night. Follow him past the Houses of Parliament (where he made his name writing Sketches by Boz) and down to the foot of Hungerford Bridge and the grey Thames (“stretching away to the great ocean, Death”). This is where the 12-year-old Dickens worked in Warren’s Blacking Factory. You can kindle some Pickwickian cheer in Gordon’s Wine Bar on Villiers Street. It dates from 1890 but is undeniably “Dickensian”. The trains (which brought Dickens’ coffin from Kent) clatter overhead in and out of Charing Cross. 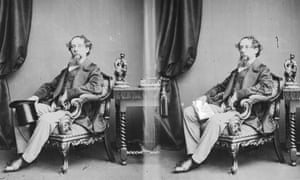 Parallel Buckingham Street (where Dickens – and David Copperfield – once lodged) leads to the Strand. Nothing much survives other than its width and bustle, but the Lyceum Theatre (opened 1834) put on an adaptation of A Tale of Two Cities in 1860. And Dickens lived just behind at 16 Wellington Street (now gone) before moving to number 26, where he kept a bachelor flat and produced his magazine, All Year Round.

Walk across Covent Garden and past the grand, grubby Garrick Club, which Dickens loved and loathed. In Dickens’ day, Seven Dials, just to the north, was a raddled slum of “dirty men, filthy women, squalid children … reeking pipes … depressed dogs”. Thanking your lucky stars (or the author’s campaigning work), head east along narrow, now-sanitised streets to 58-59 Lincoln’s Inn Fields, the house of Dickens’ friend and biographer, John Forster. In Bleak House, this is the home (and murder scene) of the ghastly lawyer, Mr Tulkinghorn. 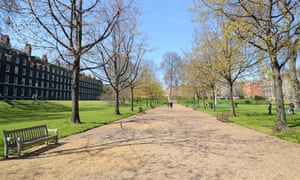 One of Dickens’ own homes lies to the north, best reached via Chancery Lane (“the one great principle of English law is to make business for itself”) and Gray’s Inn Walks Gardens. Dickens lived at 48 Doughty Street from 1837 to 1839, the period when his fame was at its height. It has been reconstructed as he knew it (sort of): his desk, the dining table set for a feast, and the bedroom where his sister-in-law, Mary, died.

Head across Gray’s Inn Road and follow Elm Street and Mount Pleasant (where Smallweed skulked in Bleak House) to cross Rosebery Avenue into Coldbath Square. Then take Crawford Passage into Farringdon Road and the warm embrace of the Betsey Trotwood pub. Betsey was David Copperfield’s aunt – and the pub, while not of Dickens’ era, feels right. Just to the left is Pear Tree Court, where Oliver Twist watched the Artful Dodger picking pockets. 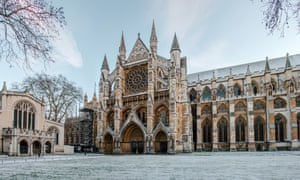 Next, dodge back along Clerkenwell Road to go down Hatton Garden (number 54 was Mr Fang’s magistrates court in Oliver Twist), admiring the jewellers, and into Saffron Hill. The streets are dark, narrow and now gentrified: you wouldn’t think that this was once Fagin’s lair, nor that the One Tun pub was, reportedly, Bill Sikes’ local, The Three Cripples.

Cross Farringdon Road again, which was in an uproar of new building in the 1860s (it still is) and finish in the tiny Jerusalem Tavern, opened in 1996 but looking ancient. There’s a log fire, it’s cold outside, so raise a glass and say, “God bless us, every one!”
Peter Fiennes is the author of Footnotes: A Journey Round Britain in the Company of Great Writers (Oneworld, £16.99), available for £14.95 inc UK p&p at the Guardian Bookshop

5 Ways to Avoid Getting Burned With a Vacation Rental

What is the Thomas Cook rescue deal and what does it mean for holidaymakers?