“Yeee-ees!!” cries my coach, Oliver, as we near the water’s edge. Wave after wave surges towards us, peeling sideways before crumbling at our feet. No closeouts, no guessing where waves will break, just perfect peaks stretching into the distance.

Most surfers would be stoked to see this at any beach in the world, but I’m eight miles from Bristol’s centre and three from the English “coast” (if you can call the muddy Severn estuary that) at a man-made surfing venue that opens on 4 November.

This £26m project, called The Wave, features a vast, cove-shaped lagoon which can produce up to 1,000 waves per hour, from whitewater for beginners to 1.8-metre barrelling sections for dudes. There’s a wooden-clad ops building with changing, dining and viewing facilities, created with accessibility and sustainability in mind. Beyond it, meadowlands and camping plots are under construction. 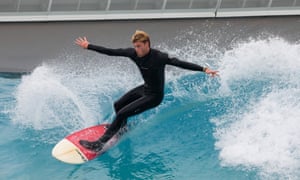 “It’s the kind of stuff you dream about as a kid,” Oliver says with awe. “I think I used to scribble drawings of this.”

As a self-taught surfer of limited skill, I’ve signed up for a 90-minute intermediate lesson – hardly enough time to unpick five years of bad habits. After a warm-up, Oliver introduces me to my board: a large, lime green “foamie”. He says: “What we’re teaching here is exactly the same techniques as at the ocean, from popping up, to currents, to line-up situations, but here we can turn around and look back at exactly the same waves and reassess things. It’s an amazing pathway for learning.”

The lagoon is filled with drinking-quality water, and when I dip my toes in I’m glad I heeded his advice to wear a 5mm wetsuit and booties (included in the admission fee, along with boards). Within a minute, Oliver is pushing me into my first wave. “That was perfect,” he says, almost apologetically, as I pop up and ride through the whitewater. 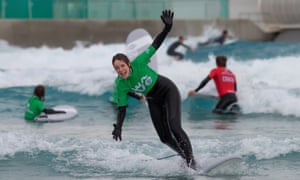 My performance nosedives thereafter – figuratively and literally – and the next 30 minutes feel like a one-man audition for kook of the day. Oliver remains upbeat, adjusting my stance and guiding me into waves with encouragement. Then comes a lightbulb moment: “You have to think about coming through, not popping up explosively,” he says. Suddenly, the lagoon is no longer my nemesis.

The idea of building a surfing lake in Bristol came to The Wave’s founder, Nick Hounsfield, an osteopath and lifelong surfer, in 2011. He wanted to “create a health and wellbeing destination that was safe and cohesive”, open to people who might often feel excluded through “disability, illness, age, gender, background, income, fears”.

He contacted Basque firm Wavegarden, but saw their initial designs, used at Surf Snowdonia in Wales, the UK’s first artificial surfing lake, run into issues early on. Luckily, Wavegarden fashioned a new concept. “Snowdonia is powered by an underwater foil, so when they have problems they have to drain the lake,” says Nick. “We’ve got 40 paddles which slide forwards and backwards on a simple rack and pinion system. It’s basic engineering. A computer co-ordinates those paddles, and the lake bed is sculpted like an ocean reef to create different types of waves.” 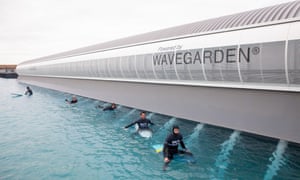 The 70 acres of former agricultural land a short distance from the M5 are highly accessible but removed from the bustle of Bristol. They hope to attract around 150,000 visitors per year and are already planning another venue in London’s Lee Valley.

“If you close your eyes, it sounds just like the ocean out here,” says Nick. “But oh my goodness, it’s waves on tap.”

Having surfed at Snowdonia last year, I can’t tell the difference, but the advanced surfers I meet are beaming. “I had a blast, people are going to love it,” says board-shaper and Wave ambassador Ben Skinner.

The technology allows elite surfers to practise where the biggest waves are generated, while beginners can learn in the safety of the shallows, as they would at a natural beach. What is hugely noticeable is the sense of camaraderie. With up to 80 surfers of differing abilities in the lagoon at any one time – grouped by ability and overseen by “hosts” and coaches (there’s one for every eight people in the beginners’ section) – you’re more likely to have “rival” surfers praise your takeoff than snake your wave.

At the end of my session, I convince my coach to let me try the advanced waves. “This is my defining moment,” I joke. “No, don’t put that pressure on yourself; it’s just another wave,” Oliver replies. The lagoon is empty and I feel the eyes of a dozen spectators on me. “Paddle, paddle, paddle,” Oliver yells. I pop up fairly smoothly before wrestling my way to the shore. I’m greeted with high-fives from staff. “Everyone in the control room was whooping – they were like ‘he’s up!’” one tells me.

I’m simultaneously relieved and thrilled: it’s remarkable how easily frustrations can be swept away by one man-made wave.

• The Wave, Washingpool Farm, Easter Compton, Bristol, thewave.com. Kids from £30 and adults from £40 for an hour’s surf without a lesson; kids £45 and adults £55 for a two-hour session with a lesson

The most sought-after travel experiences revealed