There is no horizon: only the odd hint indicates what is water and what is sky. A dolphin shows its back, just for a second. A pair of oystercatchers draw two cursive Ms against the blue. Otherwise, the water of the Pamlico Sound is so still, and the silence so complete, it’s a disembodying experience. Slick cam, they call it.

From his kayak, Bob Chestnut could reach down into the shallows and pluck out any number of treasures. Through the water he can see the dark ragged outline of oyster clusters, a shimmering of scallop shells and mussels pre-opened by the birds. In the summer, families come out here with long rakes to dig for clams.

The Outer Banks – a narrow chain of barrier islands off the east coast of the US that separates the Atlantic from the mainland – are no secret to Southerners. Their 100-mile stretch of beach, running from Corolla in the north to Cape Lookout in the south, is a vacation magnet for families and spring breakers alike, as well as a pilgrimage for sporting types who can kite surf or land big game fish in the warm Gulf Stream waters. And while the Banks can claim no town with a population larger than 3,000, they still have a rich human history, inhabited by the Roanoke and Croatan people until the arrival of English settlers in the 1500s – not to mention the site of the Wright Brothers’ first powered flight. 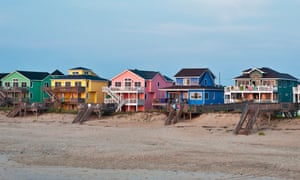 It’s not always this quiet in Ocracoke. The weather can be rough – Hurricane Florence blew in last year. And just because the North Carolinan island is hard to get to – three hours’ drive from Raleigh, followed by an hour’s ferry ride – it doesn’t mean people don’t try. A new passenger ferry from Cape Hatteras has recently been announced, because the queue for cars can be up to three hours in summer. But the locals don’t resent the visitors, says Chestnut. “The people we get tend to be the people who appreciate it.”

Roanoke island boasts the quaint and well-heeled town of Manteo, complete with a yachting marina and Elizabethan garden. Across the Oregon Inlet – by way of a couple of epic bridges – are Nags Head, Kitty Hawk and Kill Devil Hills, seaside towns with connecting shorelines stacked with stilted beach houses. 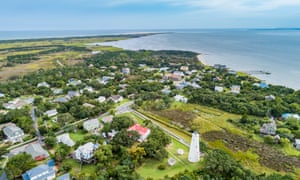 Keep driving south to Hatteras island, across the newly constructed Bonner bridge, and you are rewarded with 70 miles of protected seashore. With the blessing of the islanders, the Hatteras shoreline was designated a national park in the 1930s and today its meeting of beach, marshland and maritime forest is a haven for wading birds, water mammals and more. “I’m anti-regulation in general,” says Chestnut, candidly. “But we have a better relationship with the park service than most.” Which is why on Hatteras and Ocracoke you are free to drive your 4WD vehicles across the golden sands, knowing that the nesting turtle population is well protected. And why while some come here to spot seals and harbour porpoises and snowy owls, others come to shoot ducks, or go flounder gigging – spearing flatfish in the shallow waters, a skill learned from the Native Americans who once used this place as a hunting ground.

The islanders of the Outer Banks have always treasured their freedom. The waters surrounding them – known as the graveyard of the Atlantic, because their ever-shifting shoals are so perilous to shipping – were once a hideout for pirates and privateers. Edward Teach, aka Blackbeard, was killed (and then beheaded) while at anchor on Ocracoke. The island’s brewery – which makes an unexpectedly tasty oyster stout from the local catch – is named 1718, after the year of his capture. 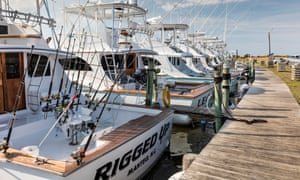 Still accessible only by boat – from Hatteras to the north, or Cedar Island to the west – Ocracoke’s past has been preserved by its remoteness. “Nobody stumbles across Ocracoke,” says Chester Lynn, whose ancestors have been here for 10 generations. “I can remember the days when you had to take three ferries to get to the mainland.” Lynn sells antiques out of every room of his single-storey family home and, as one of the older residents, still speaks with the brogue that is part of the island’s Elizabethan legacy – an accent closer to northern England than the American South.

The community spirit, too, has been preserved. In the cafes and restaurants regulars talk across tables, sharing stories of their day and asking after friends. The buildings themselves are a glimpse of the island’s 1930s heyday, when it was a thriving fishing community and pilot town, helping trading ships to transfer their goods across the treacherous sounds on lighters.

Back then, “Jack’s store” was the place locals gathered to collect their mail and their gossip; that it’s still standing is no surprise. Make-good-and-mend is central to the island culture. Among the quirkiest results of that attitude are the tiny, walled cemetery plots where the island’s chief families have buried their relatives. 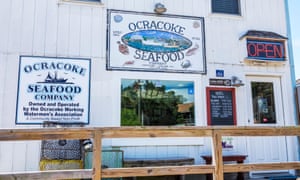 “The problem has always been that the water table is so high it was hard to keep people buried,” says Amy Howard, who runs the Village Craftsmen store. “A good flood could pop up a casket.” Her family traces itself back to William Howard, Blackbeard’s quartermaster. “Luckily for him he was in jail in Virginia when the big battle happened, and he got a pardon,” she says.

Some locals claim to have seen phantom pirates out at Springer’s Point, the site of Blackbeard’s last battle; but visitors can have their own haunting experience with a boat ride to Portsmouth island, just a couple of miles away. Abandoned by humans in the 1970s, it is now a compellingly eerie ghost village, and tour guides like Wade Austin – whose father was a ferry captain – still have living memories of Henry Pigott and Marian Babb, the last man and woman to live there.

Austin has travelled the world, but nothing would tempt him from Ocracoke. “I’m not much of the city to begin with. I saw the world, and I came back. It’s what most people here do.”

• Wayfaring Stranger: a Musical Journey in the American South by Emma John is published by W&N (£16.99). Order a copy for £14.95 at guardianbookshop.com

PM hits back after photo furore