My daughter Iris is fearless, especially around water. When on holiday in Cornwall last year I was usually found chasing after her as she climbed terrifying rocks or, more often, just walked into the sea. She was four. Here she is walking into the sea between rocks at Widemouth Bay near Bude.
Laura Benson 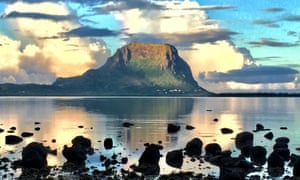 As a child you were already in my eyes this great lady … I always loved that you were at the centre of my drawings … O majestic mountain, you queen of the Morne peninsula. Beautiful and silent you keep in your soul the history of the island … You live in time.
Jean-Marc Planteau de Maroussem

Every week we ask our readers for recommendations from their travels, a selection of which will be featured online. There is usually a travel-related prize for the best tipper but that has been suspended for the time being – though hopefully it will return soon. But in the spirit of solidarity and optimism, we’d still love you to share your finds with fellow readers. To enter the latest competition visit the readers’ tips homepage 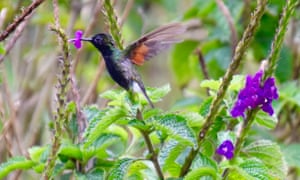 I went to the Hummingbird Garden at El Silencio Lodge and Spa to photograph a creature who loves at 1,260 heartbeats per minute. But the hummingbird moves faster than I can set my shutter speed. The first picture has her as a smudge across the lens. In the next shot I captured only a flower, perfectly in focus but sucked of nectar, and the bird had flown. I learned to listen for the blur of wings; I learned to slow my breathing; I learned to be still.
Elizabeth Gowing 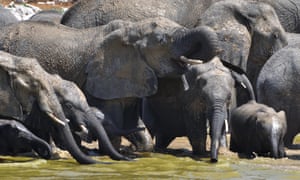 We’d visited Etosha national park before, but had rushed from one waterhole to the next. This time, we decided to spend a whole day at Okaukuejo waterhole. While tourists loaded in to safari vehicles, we sat and watched. Herds of springbok and zebra gave way to jackals hunting and playing. They were joined by a rhino and giraffes. Shortly before midday, over 20 elephants suddenly appeared, and rushed into the water like excited teenagers. The safari vehicles hadn’t returned from their searches, so it was just us (well, and one other couple) and the elephants. Magical.
Frances Valdes 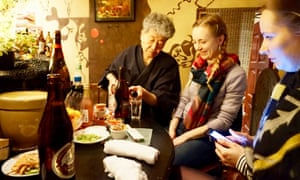 On a budget trip to Japan with my sisters and brother-in-law, one night in Osaka we stumbled into this tiny bar. The place was charming but, without any menus, we were afraid of falling into the classic tourist trap of spending a fortune. Several times, the kind, aged bartender explained we were in a nomihodai. The problem was, we didn’t know what that meant. We cautiously ordered one drink each and – on his insistence – a glass of sake. He was so hospitable and tried to serve us food and more drinks but, still uneasy, we politely declined. It was only afterwards we learned that a nomihodai is an all-you-can-eat/drink bar. We could have stayed there for hours!
Sarah Collings

Having a laugh, Gambia 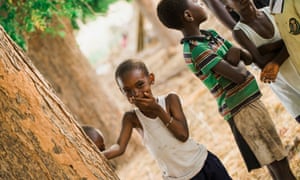 I took this in Gambia after our taxi broke down in the middle of nowhere. We had to walk a mile to the nearest village to find a mechanic. The local children found our breakdown quite amusing. This had been a special day, travelling cross-country to see chimpanzees and hippos in the wild. So although we missed our ferry back, the day will stay with me for a long time.
Richard Gabriel 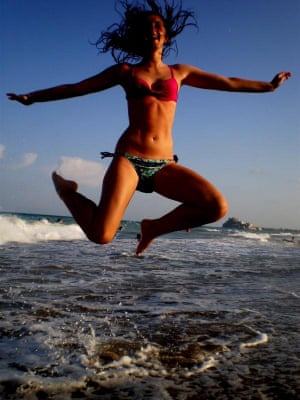 This is my daughter Lucia (aged 14) in the sea at Peniscola, near Valencia, in 2010. The photo sums up that holiday – hot, watery and very Spanish. Every day we would gather at our apartment poolside bar, where all the holidaying locals in their swimwear would drink cold wine, eat seafood tapas and smoke. There were very few British tourists but a number of French and Germans. In the town there was a wonderful cafeteria called Los Jubilados run by retired ladies who served vast plates of arroz negro and chipirones at ridiculously low prices. It’s a beautiful place to visit, particularly in the summer heat.
Simon Williams 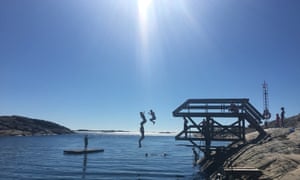 To celebrate our 10th wedding anniversary in August 2016, we invited a crowd of family and friends to join us in West Sweden – many of whom had been with us when we married on the beach on the island of Orust. We live in the UK but visit my husband’s native land as often as we can. The day we visited the island of Tjörn to jump from the diving tower at Stockevik was perfect, sunny and warm. Heaven!
Deb Hampson

Mixed up with the New York cops 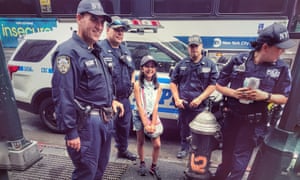 This shows my normally very-well behaved and law-abiding daughter Aakshi, doing her best to get herself arrested by New York’s finest. One of a set of fabulous pics from an extended family trip across the US and Canada.
Kaushik 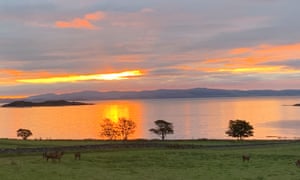 George Orwell described Jura, where he wrote 1984, as “the most ungetatable place”. My family really put this assessment to the test when within 10 hours of arriving my dad’s long-term medical condition had flared up. This precipitated a mad rush to get him on the last night ferry to Islay, through the tail end of Hurricane Dorian. From Islay hospital he was airlifted to Glasgow (and apparently fed chips en route by the paramedics). He returned in good health to the tranquillity of Jura, where members of the population of 188 showed the full extent of their hospitality and generosity. He thereafter received innumerable free ferry trips and enquiries after his health (it seems gossip spread remarkably fast!).
Cora 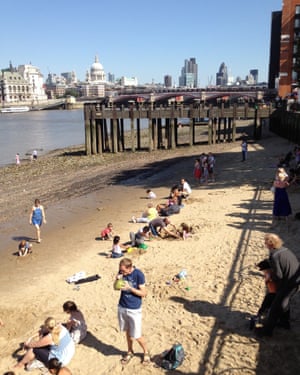 Walking along the Southbank, I came across this shot. I loved the juxtaposition of a typical beach scene, including someone drinking from a fresh coconut, with the City of London as a backdrop. This image perfectly illustrated the diversity and ingenuity of this wonderful capital city.
Chris Paterson

Morning after the night before, Thailand 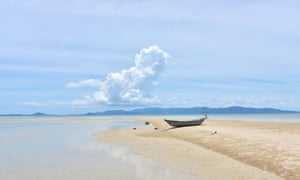 I was backpacking solo in Asia when I found myself on Kho Phangan in Thailand. After a crazy beach party night, I was astounded by the beauty of this island, which is mostly famous for its parties.
Christos Spyropoulos

The Best Travel Backpacks to Shoulder for Your Next Trip