Home » Holiday guides » Life after lockdown in New Zealand: a night out in Wanaka

Wanaka lakefront is a tourism wonderland; a buzzy, bar-filled strip with a 180-degree view of the Southern Alps. At the height of the season, the town is defined by its epic parties. Alongside a love of snow and action sports, there is an equal love of decadence; locally brewed beer, top-shelf pinot noir and late, luscious nights.

In 2014, I was working as a librarian in town and the Trout bar became my local. Through then-permitted social mingling, I appeared in a country music video filmed at the bar, met a boyfriend there, and buddied up with a locum doctor who became a close friend.

Life after lockdown in Athens: ‘The marble had space to breathe’

Late last week, Jacinda Ardern, the prime minister, permitted bars and clubs to open after a strict seven-week lockdown. Rigorous social-distancing measures have been stipulated, including keeping tables two metres apart and no “mingling” between the tables. The “bar” of the bar is off-limits (“high-risk”, health officials say) and there is table service only.

For Trout owners Moana and Brent MacKenzie, former dairy farmers from Southland, the lockdown couldn’t have come at a worse time: they had only taken over seven weeks before. The couple accessed the wage-subsidy scheme for their employees, and say strong local support should mean they can stay afloat – but adjusting to the more-restrained atmosphere and the strict health guidelines has been a challenge.

“My wife, Moana, cuddles everyone and she’s had to rein that in, which she’s found very difficult,” says Brent. 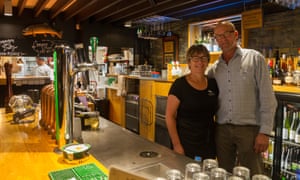 On Saturday night, Moana buzzes around the bar, leaning into customers with a big smile, trying to put everyone at ease as some struggle with nerves; the requirement to sign in, use hand sanitiser, and remain at their tables. People keep wandering up to the bar for a chat or another pint – forgetting – and are gently ushered back to their tables.

Life after lockdown: ‘Rome is trying to find her equilibrio’

“That’s probably the hardest thing for me because I’m a warm person,” says Moana. “I get banished to stand behind the bar a bit because my natural urge is to touch. I miss that interaction with our locals, especially when they’re supporting us.”

Trout does a good trade on Saturday night, but the atmosphere – like many bars and restaurants in town – is a little stiff. There’s no raucous laughter and conversations are subdued, and somewhat earnest.

“It’s definitely a different vibe,” says Kay Scott, 47, who’s out for a birthday drink with her husband, Stu, and on their first social adventure beyond their own home in months.

“It’s a lot quieter than it would be, usually the rugby would be on, which gives things a kick along. I miss that. Yeah, it just feels like everyone’s being kind of cautious,” says Kay. 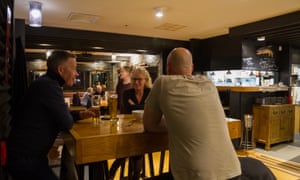 Since opening, Wanaka police have done a number of random patrols of the bar, including on Trout’s opening night.

“We had the police walk in, there were eight wives in the corner, and eight husbands on the opposite side of the room,” says Moana, chuckling.

Life after lockdown in Porto: returning to my local cafe

“The police panicked, thinking they were singles and would start mingling. I said to the police, ‘They’re husbands and wives, look what you’ve done, you’re creating chaos in homes around Wanaka.’”

Two hundred metres down the lakefront and up a flight of stairs is the dark and moody La La Land, a cocktail bar that is empty at 9pm. My partner and I order drinks and – being introverted – don’t mind having the DJ to ourselves. Within the hour though, the place is heaving, and social-distancing rules are open-slather ignored as drunk (or drugged) patrons loll over the bar, sidle up to strangers and unleash energy that feels barbed and slightly dangerous.

A policeman, older, does a cursory patrol that takes less than a minute. As soon as he leaves, the party kicks off again, and the atmosphere is charged with late-night promise. The two staff, employed to serve 100, are overwhelmed.

By midnight, any pretension of social-distancing is yesterday’s news at Rove in Post Office Lane. New couples kiss by outdoor braziers, tourists are invited to join large tables of locals, and staff look – mostly – pissed off about table service.

After so many weeks at home, reading our books and making homemade soups from garden vegetables, it’s a relief to see faces that are not each other, and not familiar in any way. While we stick together, soberly at our table, the mob of glossy strangers and the fizz of where the night could lead swirl around us like an elixir of youth, hunger and a total disregard for the rules.

After Going Missing for Several Days, 80-year-old Hiker Shows Up at the News Conference Staged to Find Him

Agencies can still get money from the federal government for pandemic losses: Travel Weekly

10 Best Bars in Napa and Sonoma