Home » Holiday guides » Food, wine and antiquity in Frascati and the Roman hills

‘We’re going for an aperitivo,” says our guide, Valerio, “but first we need to shop.” In Frascati’s ancient centre, we head to a norcineria (pork butcher’s) for a selection of cured meats, then a deli for olives and panzanella (crunchy bread salad with tomatoes and lots of oil and aromatics) and the all-night bakery for sourdough bread.

We settle with our goodies at a battered table outside Osteria dell’Olmo and order a carafe of chilled white. Owner Remigio Sognatesori doesn’t bat an eyelid, because bringing your own food is a time-honoured custom in the fraschette (maker-run wine bars) of the Castelli Romani, 17 small towns on volcanic hills south-east of Rome, of which Frascati is the liveliest.

Remigio tells us that from at least medieval times winemakers would hang out a laurel branch (frasca) when their new wine was ready. Locals and passing farmers would flock to these cellars to carouse and quaff, taking their own snacks and nibbles to soak up the wine. And if those nibbles were salty and spicy – olives, salami and coppiette, the jerky-like strips of cured shin meat with lots of chilli that we’ve brought – well, that just led to more jugs of wine, merry drinkers and happy owners.

“It was genius,” adds Remigio. “People loved them, and they gave makers a local market for their wine.”

By the 1800s, he says, there were more than 1,000 fraschette in Frascati alone, and their fame had spread to the big city. Particularly after the railway from Rome opened in 1856, escaping hot, crowded streets for an evening in a rural winery became a cool option for city-dwellers, as it still is. Today, most fraschette also do food, but they’re still all about local wine and specialities. 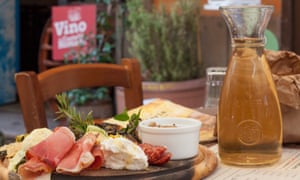 The Castelli Romani towns sit atop hills at least 320 metres high, with splendid panoramas as far as the dome of St Peter’s. After our aperitivo, we stroll round the corner to Cantina Simonetti on sloping Piazza San Rocco. I gaze at the view, and at the sun setting over the cobbled square with its paper-covered tables filled with happy customers – and admire yet again the Italian knack for la dolce vita.

I love the way the ancient cellar door at Simonetti is bowed at the sides, to allow huge barrels in and out. Frascati wines have long had a bulk-and-boring image but recent efforts to improve quality have paid off. A carafe of appley-almondy white is a perfect foil for classic amatriciana pasta and a tasty if rather out-there main of coratella (lamb entrails). Offal is as cherished here as in Rome, but I still wimp out of ordering trippe.

For a side trip from Rome, the Castelli Romani, half an hour away by rail, are hard to beat. As well as Frascati, trains also run to Albano and Lanuvio. And while it would be tempting to spend all day eating and drinking, the area’s volcanic topography and turbulent history mean there’s plenty to see and do between meals. 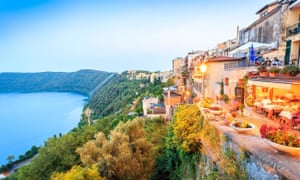 History can mostly be enjoyed by strolling streets rather than doing museums. Albano, on the Appian Way, has a second-century military gateway, huge Roman water cisterns and a well-preserved amphitheatre whose acoustics we test out with claps and yells. In smaller Lanuvio, a seventh-century BC temple to Juno shares a green hill with a dog park and children’s playground, and the water fountain in its town square, between butcher and chemist, is a richly carved second-century Roman sarcophagus, repurposed by villagers generations ago.

Before weary city workers started coming here to drink, these airy hills were a bolthole for Roman nobles including Cicero. In the Renaissance, wealthy families spent fortunes upgrading their summer villas, and several of these are now open to the public, offering an eyeful of 16th-century conspicuous consumption. Rooms in the Chigi Palace, for example, have “wallpaper” of richly decorated leather – which can be seen in banquet scenes from Visconti’s the Leopard, filmed here.

I doubt whether that was much consolation in the 17th century for the 10 daughters of Agostino Chigi, banker and finance minister to the pope, who were all made to become nuns. Their portraits, veiled and wimpled, line one room. Only one looks content with her lot. 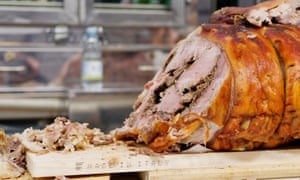 I imagine the poor loves got to enjoy the toothsome speciality for which the town outside their palace walls has been famed since Roman times – porchetta. Most Italian markets have a van selling this boneless stuffed roast pig, but Ariccia (walkable from Albano station) is porchetta central. Fraschette on Via Borgo San Rocco all have fragrant home-cooked porkers outside. At Sora Ines (no 19) a €14 antipasto includes mounds of porchetta with shiny brown crackling, prosciutto, mozzarella, melon, mushrooms, roasted aubergines and more.

We do our best with that, then drag our bellies up the hill to an extension of Ariccia’s fraschetta quarter, in rows of former wine cellars flanking the palace. One, Osteria di Corte, has a special claim to fame: young chef Marco Liberti’s cacio e pepe pasta came top this year in TV food show 4 Ristoranti. This is a bit like winning MasterChef, and the dish doesn’t disappoint: creamy sheep’s cheese coating fat spaghetti, with a hit of black pepper. 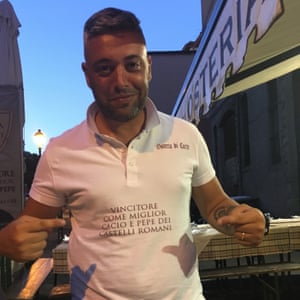 We also check out a fraschetta called Hosteria la Fraschetta in papal retreat Castel Gandolfo, then head for Marino village – whose fountain runs with wine at festival time. Here we taste Marco Fabi’s delicious straw-coloured whites in a wine museum he has set up in a disused cellar. And of course he, too, has a fraschetta: Fòr de Porta in the village centre has all the favourites, plus a tasty vegan selection: truffles, bean purees, fennel, wild and cave-grown mushrooms and more.

These wooded hills hide two deep greeny-blue lakes and lots of scenic trails. The larger lake, Albano, has beaches on one side, with kayaks and paddleboards, but I long to try the cycling/walking paths on its wilder east, or hike to Monte Cavo at almost 1,000 metres.

Because it’s hard to make the most of these Roman hills unless you’ve worked up a very large appetite.

• Accommodation was provided by Hotel Colonna in central Frascati, which has doubles from €75 B&B. Train travel to Frascati was provided by Trenitalia. More information at Visit Castelli Romani

Popular destinations to fly to for under $150

Resort fees are still around. Here’s what to know if you’re planning a trip in 2021.

Siem Reap – there's so much more to see than Angkor Wat. ·