The Atacama desert may be the driest non-polar place on Earth but on its southern fringe is a stretch of vineyard-lined hills – the Elqui valley. This streak of green in arid northern Chile wiggles inland from the Pacific near the nation’s second-oldest city, La Serena. Historically the domain of agriculturists, it’s now increasingly visited by people with a different profession: astronomy.

By 2020, this grape-filled valley (along with the greater Atacama desert) will have an estimated 70% of the world’s astronomy infrastructure, thanks to its high altitudes, low population density and near non-existent cloud cover. As more scientists move to Elqui’s space-age facilities so do everyday astro-tourists in the hope of gazing at the heavens.

The International Dark-Sky Association declared Elqui valley the world’s first International Dark Sky Sanctuary in 2015 due to the unrivalled purity of its skies. On 2 July 2019, the same cloudless sky that makes Elqui ideal for stargazing will be all but guaranteed when the moon blocks out the sun to create a total solar eclipse.

To tour the Elqui valley ahead of its moment in a dark spotlight I travelled from the Chilean capital Santiago to La Serena (it’s possible to take a train or drive). In La Serena, the city’s pastel-coloured centre hints of earlier, colonial times, when this was one of the most important ports on South America’s Pacific coast. 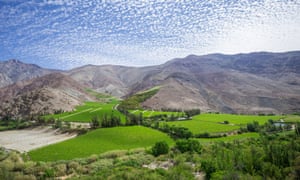 Of course this area’s history predates the arrival of Spaniards in the 1540s. On the way out of town, my guide, Cristóbal Vergara of Turismo Tembeta, pointed to the ruins of a small Inca citadel sitting atop a peanut-coloured hill.

Just after the town of El Molle, we passed the teal blue Puclaro reservoir, an artificial lake created in 2000 by damming the Elqui river. Soon after we spotted a series of alien-looking objects on the hilltops of the pre-Andes range. These shiny metallic orbs – observatories for visiting scientists – glistened like 21st-century remakes of that earlier Inca relic.

We saw the Gemini South and Cerro Tololo Inter-American observatories, both operated in partnership with American organisations. Cristóbal pointed to another, the Large Synoptic Survey telescope, and told me the future of astronomy is on the horizon: “It’s like we’re moving from the bronze age into the iron age.”

This wide-field survey reflecting telescope has an 8.40-metre primary mirror (the world’s largest digital camera) and will photograph all the available area of sky every few nights when it opens in 2022. 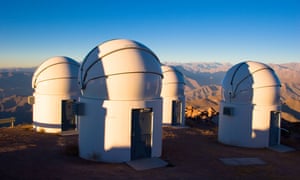 The Elqui valley opens up near its largest city, Vicuña, where we stopped for lunch at Delicias del Sol Villaseca. This restaurant, run by an association of 25 local women, specialises in cooking in what are described as solar ovens (glass-topped boxes with reflecting flaps). I ordered the house speciality: stewed goat, slow-cooked under the morning sun.

We moved on to the nearby adobe village of Diaguitas to cap off the meal with a beer at Cervecería Guayacán, a craft brewery that derives 70% of its electricity from solar panels. Of the nine beers on tap, I opted for the strong ale brewed with chañar, a shrub with edible berries, that Cristóbal described as “the dulce de leche of the desert”, thanks to its caramel taste and creamy texture.

Over beers on the shady terrace, Cristóbal told me how this valley became famous for the valour of its soldiers during the War of the Pacific in the late 19th century, in which Chile gained much of the Atacama desert (and its vast mineral wealth) from Peru and Bolivia. These men had one big advantage over their compatriots: an endless supply of the locally brewed grape brandy, pisco. Cristóbal suggested we head deeper into the valley to taste test the drink that fuelled these legendary soldiers. 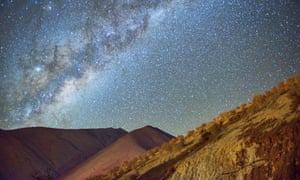 We saw sun-bleached hills and a startlingly green valley floor lined with the vineyards of Chile’s top pisco distillers as we moved inland towards the town of Pisco Elqui. Just off its main plaza is Destilería Pisco Mistral, which takes its name from the valley’s most famous resident, Gabriela Mistral, who was raised in the nearby village of Montegrande and in 1945 was the first Latin American author to receive a Nobel Prize in Literature.

Pisco is most often used to make the frothy national cocktail, pisco sour, a mix of lime juice, sugar, egg white and ice. I had my first sour of the day in the distillery’s succulent-filled gardens and downed my second nearby at Elqui Domos, a glamping retreat whose geodesic domes (from £75) have retractable roofs for stargazing. 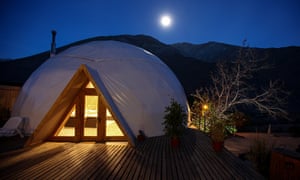 After a long night in search of globular clusters and planetary nebulae – both with a guide at the onsite observatory and on my own from the comfort of my desert dome – I met up with Cristóbal the next morning to continue our journey. The valley forks near Pisco Elqui and we had two options: continue straight toward the high-Andean community of Alcohuaz or turn east toward for the new-age draw of Cochiguaz.

Cristóbal said the latter was a place associated with cults and UFO sightings. I opted for Alcohuaz, though it seems both places share an affinity for mysticism – there were dusty gem shops, meditation centres and self-proclaimed healers hawking dubious bee-venom therapies. But the star attraction at the end of the Elqui valley has to be the avant-garde wine project Viñedos de Alcohuaz.

Wine-maker Marcelo Retamal’s experimental vineyard, which opened to tourists this year, plants rare-in-Chile varietals, such as garnacha and petite sirah, at 1,650 to 2,200 metres above sea level, making these some of the highest-grown grapes in the world. The initial pressing of the fruit is done by the ancient grape-treading technique, before the wine is aged in oval casks, mostly for high-end blends.

The soil in Alcohuaz is riddled with so much quartz that it shimmers by day and shines under the moonlight. Project manager Juan Luis Huerta, a former pisco producer, told me the quartz has mystical powers.

“Do you believe in the energy of the Earth?” he asked, leading me to a large circular symbol made of quartz in the middle of the vines. He found it here before planting began in 2005, and said strange things happen in its presence. His phone loses signal, his skin tingles, the closest vines don’t change colour in autumn …

It was yet another reminder that there’s something incomprehensible about this otherworldly valley.

We capped off our trip back in Vicuña with a drive up the barren valley to the tourist-friendly Observatorio del Pangue, whose telescope with 25 inches of aperture is the best a layman can lay their eyes on. The observatory (tours from £30) is in a Martian-like landscape at an altitude of 1,500 metres. Up here, halfway to the heavens, the stars feel incredibly close.

Two hours went by as we twisted the massive instrument across the sky in search of foreign objects, including the red-glowing Betelgeuse star and wispy Tarantula Nebula. Each pinhole view was more kaleidoscopic than the previous one.

Maybe it’s the unfathomable mysteries of Elqui’s night sky that make energy vortexes and UFOs seem more fact than fiction here. Perhaps it’s the blinding sunshine and ample libations that cause people to dream big and fight hard. There’s certainly a tangible connection between earth and sky, which is why an event such as this week’s eclipse has the Elqui valley pulsating.

• The trip was provided by Tembeta. Its two-day tours of La Serena and the Elqui valley cost from £190, including accommodation and stargazing. Flights from Santiago to La Serena were provided by LATAM. A roundtrip from Heathrow to La Serena (via Santiago) starts from £800

Observatorio Mamalluca
The most popular tourist-oriented observatory in the valley with bilingual tours where you can view the stars through a 12-inch telescope.
• Tours from £8, mamallucavicuna.cl

Alfa Aldea
Tucked into the vineyards on the edge of Vicuña, astronomers lead small-group stargazing tours using scientific-grade telescopes at this open-air amphitheatre. There’s a small hostel onsite, too.
• Tours from £17, doubles from £46, on Facebook

Cosmo Elqui
The dorm beds at this colourful backpacker retreat are in small domes, each of which has a sky window for night-time stargazing. Staff can also arrange off-site astronomy tours.
• Dorm beds from £10, cosmoelqui.cl

Turismo Migrantes
Take a small group tour to view the night sky from a hilltop near Pisco Elqui, peering through a 20-inch telescope and sharing a pisco sour around a bonfire.
• Astronomy experience from £23, turismomigrantes.com

Barack Obama Prefers to Stay at a Hampton Inn — Here's Why