They’ve picked apart the holiday experience, lingering on moments such as breakfast buffets, poolside lounging and golf tee times. As officials in Spain’s Canary Islands gear up to receive tourists as early as July, every aspect of travel is being recast against the backdrop of Covid-19.

“We call it a global laboratory for safe tourism,” Cristina del Río Fresen of the region’s tourism ministry told the Observer. “We’re analysing every link in the chain – everything that has anything to do with the tourist experience, we want to make it safe from a health perspective.”

Since the start of this month, she has led a team of more than 200 people, including health and industry professionals, to hammer out protocols for everything from hotels to restaurants and museums. The aim is to rebrand the islands, which include Lanzarote and Tenerife, as tourist destinations that offer safety along with the usual sun, sand and sea.

The new protocols, which begin in July, embrace physical distancing: hotel common areas are set to be enlarged and sunbeds moved apart; buffet breakfasts will be served, making use of partitions to separate guests from the food and extra serving staff; and all-inclusive vacations will rely on either automated machines or extra staff to serve drinks. 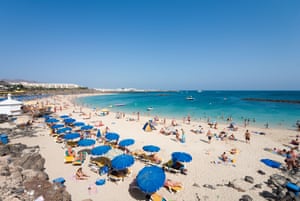 The hope is to offer holidays that won’t be overshadowed by the virus. “We’re making an effort to avoid screens or the use of masks,” said Del Río Fresen. “All those things that can lead to a sense of insecurity.”

Much is at stake. The Canary Islands rank as one of Europe’s most tourist-dependent regions, last year receiving more than than 15 million visitors who generated around 35% of the region’s GDP and some 40% of the region’s jobs. More than 13 million of these tourists arrived from outside Spain’s borders, including some five million from the UK.

It’s a tale that echoes across Spain, which is the world’s second most-visited country. The tourism industry, which accounts for 12% of the country’s GDP, came to an abrupt halt in mid-March as the country battled coronavirus, with more than 28,000 lives claimed.

As Spain slowly staggers out of one of Europe’s strictest lockdowns, the government has come under pressure to follow countries such as Italy and Greece in setting a firm date for the return of tourists. It responded to their call on Saturday, with prime minister Pedro Sánchez announcing the country would reopen to international tourism in July.

“Foreign tourists can now start planning their vacations to Spain … Today I’m sending a message to all: Spain is waiting for you starting in July,” said Sánchez. He promised that safety would be a hallmark of Spanish tourism. “We’re guaranteeing that tourists won’t be taking any chances, nor will they bring with them any risks for our country.”

Despite the lofty promises, Spain could see a loss of some 70 million tourists this year – as much as 85% of last year’s numbers – said travel journalist and analyst Fernando Gallardo. He estimated that a third of the industry could disappear, while the companies that do survive will have to suffer through a few lean years. He predicted Spain would not return to previous levels “until 2023 or 2024”.

He pointed to several reasons. “There’s so much anxiety and tension over the contagion, it’s not comfortable for tourism,” he said. “And then there’s the bigger issue: an economic crisis, the likes of which we’ve never seen before. Many will lack the resources to travel while others will be living in fear of losing their jobs.” 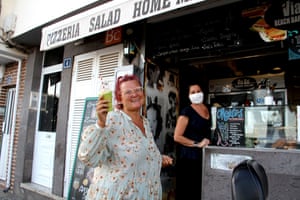 For British tourists, there is a third reason: a new 14-day quarantine to be imposed from 8 June on anyone – including British nationals – returning to the UK from abroad.

Even so, municipalities across the country have already started rolling out plans for a beach season in the shadow of the virus; from apps that warn of crowded beaches to systems that allow for advance reservation of spots on the sand. Others have floated plans to segregate sunbathers by age or hire extra security to ensure beachgoers remain at least two metres apart.

In the Canary Islands, officials are preparing for some international visitors in July, when a small number of hotels plan to open their doors.

“But we have to bear in mind one critical factor: the state of outbreaks in other countries,” the head of the Canary Islands government, Ángel Victor Torres Pérez, told the Observer. “Our main markets are the UK, Germany, Scandinavian countries and Italy. While I’m convinced things are getting better, if the pandemic strengthens in these countries, flights could be restricted.” 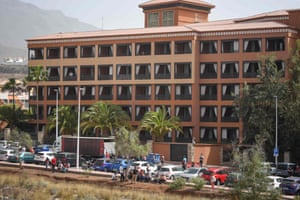 The Canary Islands emerged relatively unscathed by the virus, with 155 lives claimed among the 2.1 million residents. But the wider threat of the virus was laid bare in February when several guests carrying the virus checked into a Tenerife hotel, forcing some 800 tourists and 200 workers into quarantine and landing the region in headlines around the world.

A July flight from Madrid to the Canary Islands will test a new “health passport” app which uses data from recognised health authorities to certify that travellers are free of the virus. The government is also working with the Canary Islands on a pilot of a contact-tracing app.

Still, it remains to be seen just how keen tourists will be to venture across international borders. “I think the tourists will come little by little,” said Del Río Fresen. “It will be a gradual recovery.”

Virgin Atlantic will upgrade oldest passenger on every flight through Jan. 1

TownePlace Suites by Marriott to open in Port St. Lucie ·