There’s a thrill attached to going somewhere by boat. An expanse of open water separates “real life” from ice-cream-for-breakfast holiday mode, offering a much-needed mental and physical distance from the daily grind. Boarding a ferry from the mainland to a small island famed for its beer and beach huts makes for an even greater thrill. Our destination was Ærø, a picturesque island off the south-east coast of Denmark with a population of around 6,000. It is a popular wedding destination and, since 2015, it’s had another attraction, too.

On top of the sands at Ærø’s Vesterstrand beach is the yellow beach hut from the cover of my book, The Year of Living Danishly – first spotted when friends visited years ago and sent back a slew of photos. The book was a surprise bestseller and the hut became popular – prompting the owner to get in touch and readers to start sending their own hut pics.

So, we went on a family pilgrimage to it – the first time all of us had holidayed together: a ramshackle party of seven that included my in-laws, husband, our five-year-old son and toddler twins, who were only potty-trained a week before. My husband, a thrifty sort and fond of the great outdoors, had spared no expense and booked us into a two-star campsite. With toddler twins. Who were only potty trained a week before! 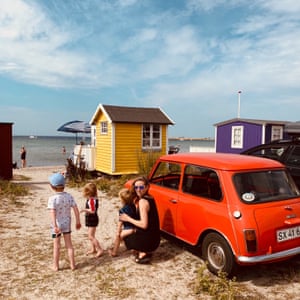 Søby Camping (adult from £12.50 a night, under-16s £7.50) is a small site on the Baltic coast with 30 pitches, wildflowers and its own beehive. There’s also a communal barbecue, shower block and washing-up facilities. It’s now also known as the place where my father-in-law destroyed my husband’s favourite frying pan (yes, we have favourites) by over-scrubbing, cue teeth sucking all around.

I’m not a natural camper and was beginning to rue the fact we hadn’t booked in to a hotel – but then I saw the view: an expanse of bleached pebbles, emerald water and cerulean sky, with scarcely a soul in sight. In a sheltered corner of the Baltic, the cape at Søby beach is littered with hulsten (hole stones) – naturally occurring “lucky” stones with holes in them made by pebbles wearing down larger stones. They’re found in spots where currents of water bash rocks about more than usual. Once we had pitched the tent and our five-year-old had overcome his outrage at not being able to watch Paw Patrol (“There’s no telly?!”) collecting hulsten became his favourite hobby. 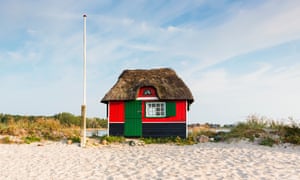 As well as the rugged coast, the island has soft, sandy beaches facing the South Funen archipelago, such as Ærøskøbing and Marstal, and naturist favourites Risemark Strand and Erikshale, where whole stretches of sand are reserved for those who like their holidays au naturel.

Getting back to nature is big in Ærø. One of the leading renewable-energy islands in the world, it aims to be carbon-neutral and self-sufficient with sustainable energy by 2025, and fossil-free by 2030. Wind turbines are already used to produce electricity. One of the first 100%-electric ferries will launch later this year, and Ærø is serviced by free buses complete with bicycle racks, making it a near-perfect car-free destination. 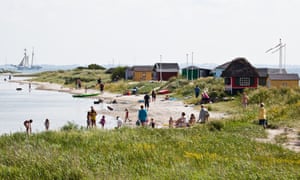 Ever the joiners, we got on our bikes. Pedalling myself, a trailer and 30kg of toddlers proved no mean feat in the August heat but we made it to Ærøskøbing, a former market town and Denmark’s best-preserved settlement of the 18th century. Today, the 900-strong population live in yellow houses on cobbled streets lined with hollyhocks, looking and feeling very much like something out of a fairytale. My father-in-law stumbled across a willow workshop and set about creating an “abstract sculpture” of woven twigs so vast that he elected to leave most of his luggage behind so he could transport it home in his suitcase. The rest of us opted for ice-cream in the idyllic town square before we headed to Vesterstrand to see “my hut”.

We met the owner and her family; it was strangely moving, being there with my own brood. I wrote The Year of Living Danishly following years of failed fertility treatment and thinking I’d never have children of my own. And now, here we all were. I had “a moment” – before being snapped out of my reverie by a toddler staging a dirty protest in a sand dune. We mopped up, made our apologies and moved on. 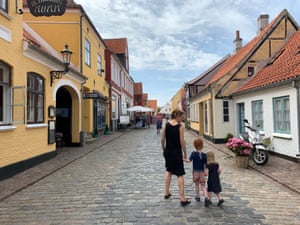 Ærø has a strong maritime history and at Marstal Søfartsmuseum we learned about the island’s shipping past via paintings, model ships and even a child-size play boat that my kids would happily live in. However, my husband had scheduled a brewery tour; he selflessly insisted that it was “research”, so we tore ourselves away. Ærø’s Rise Brewery (45-minute tour £15.50) boasts speciality beers, including IPAs, stouts and a seaweed ale, with labels so decorative that my husband took to peeling them off to paste into a scrapbook. Ærø’s brewers make barley salads and biscuits out of the leftovers from the brewing process – and they were tastier than they sound.

In case beer and boats aren’t your thing, Ærø also offers organised photography walks, as well as beach yoga, guitar coaching, classical music concerts, sailing, kitesurfing, fishing, golf and all manner of opportunities for eating. As well as cafes and kro – the closest thing Danes have to pubs – every second street has an honesty box selling salad leaves, potatoes or honey, and for everything else, there’s a Co-op grocery. 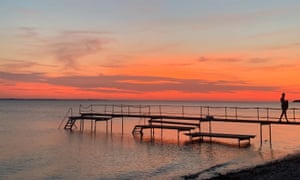 Our evenings were spent barbecuing, a glass of wine in hand, spying on what other campers were having for supper. A pair of Germans became the envy of the campsite for their seafood platters and champagne, while we chowed down on charred sausages. Still, eating alfresco while watching Aperol spritz sunsets wasn’t too shabby.

We fell into a rhythm that was relaxed and reconciled to the minor inconveniences of life under canvas: bee stings, permanent stickiness and a man in the tent next to us suffering from sleep apnoea, mostly. There’s a cadence to island life that’s largely dictated by the ferry – from the times new people arrive, to when the supermarket gets fresh deliveries. 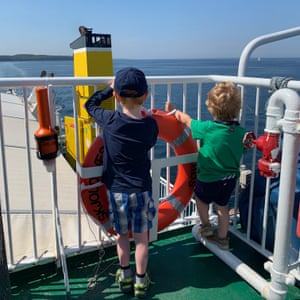 Denmark is made up of 406 islands and we have visited a few of them during six years of living Danishly. Other favourites include Fanø on the west coast, where you can drive on deserted beaches and enjoy some of the best kite flying in Europe; or Bornholm, off the south coast of Sweden, where you can eat Michelin-starred food at Kadeau and lounge by the sea on sand so fine that it used to be used in egg timers.

By the end of our island adventure, there was sand and/or pebbles in everything we owned and our five-year-old had collected so many stones that his rucksack weighed more than he did. He was persuaded to leave some behind and we took the ferry back to “reality”. On deck, we savoured a final orange sunset and toasted the trip with one last Ærø beer.

Camping with three generations, in a heatwave, was a challenging experience. But I have to admit that it was pretty special, too. Turns out Ærø is a place where memories are made. And we’re all going back again next year.

Ferries sail from Fynshav (two-hour/150km drive from Billund airport) and from Faaborg and Svendborg on Funen, Denmark (about a two-hour drive from Copenhagen airport). Tickets and schedules are available at aeroe-ferry.dk. Starling Air, a small airline, also flies to Ærø.

Helen Russell is author of The Year of Living Danishly, which is available at the Guardian Bookshop. Her latest book is The Atlas of Happiness (John Murray Press, £16.99)

• Looking for a holiday with a difference? Browse Guardian Holidays to see a range of fantastic trips

Covid travel: Japan shuts down borders to all foreigners amid Omicron uncertainty

Qantas flight skids off runway and ends up stuck in mud

One New Thing to Check Out on Every Hawaiian Island