When you think of the northern rivers, you probably think of Byron Bay. Yes, the town has surfing, whale watching and even now a Hemsworth among its attractions. But the others towns in the region, even the small ones, have all of Byron’s charm – with less traffic.

From spirits (the drinking kind) and spirituality, crystals and candles to wilderness areas, beautiful beaches and one of the country’s favourite museums, there’s something for all, whether you’re day-trippers from Queensland, weekenders from Sydney or visiting for longer from further afield.

To fly to the northern rivers, the best options are Coolangatta airport on the Gold Coast or its smaller counterpart Ballina airport. The area is accessible by public transport thanks to the North Coast railway line combined with buses. Or make your holiday a road trip – you’ll probably want a car to get around, even if you hire one along the way. 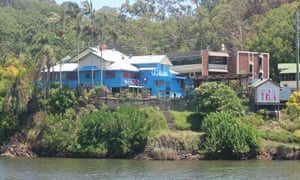 Start your journey at The Modern Grocer cafe, which has a large northern rivers wall map to help you plan your trip. The Tweed Regional Gallery and Margaret Olley Art Centre is a must and has been voted one of Australia’s best museums.

48 hours in Byron Bay: what to do and where to go

Its balcony also offers sweeping views of Mount Warning (Wollumbin). The mountain’s traditional owners, the Bundjalung people, are now asking bushwalkers to reconsider climbing to the summit. Rather, hike the shorter trail in the world heritage-listed Wollumbin national park and head to Mavis’s Kitchen at the mountain’s foot to enjoy organically grown food.

New Govardhana, an idyllic Hare Krishna farm, hosts Bhakti yoga classes and free temple feasts every Sunday. “People from all walks of life can experience Krishna consciousness without having to radically change one’s lifestyle,” says Mukunda Goswami, an early pioneer of the movement who has lived in the area for decades. Stay on the farm or head back into town to the award-winning YHA on the Tweed River. 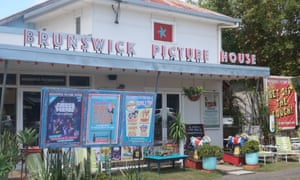 When you ask the locals why they love “Bruns”, some say because “it’s the next Byron”, others say “because it’s not Byron”. What they have in common is their passion for the town, which provided the setting for the fictional Pearl Bay in the latest SeaChange series. The landmarks featured include the Fisherman’s Co-op, the bridge where the turquoise river connects to the sea, and the Billinudgel Hotel (although it’s about 7km away from Brunswick town). Back in town and across the road from the river, the Hotel Brunswick draws visitors into its poinciana-shaded beer garden.

Brunswick is a great spot for families. It boasts a wide selection of water activities and even a “fairy trail”. For adults there’s skydiving, horse riding and hot air ballooning. You can also take in a circus, standup show, cabaret or movie at the restored Brunswick Picture House, a charming white building with red neon lights.

If you’re prepared to spend a lot on dinner, and plan it three months in advance, book in at one of Australia’s most celebrated restaurants, Fleet. The 14-seater has a changing menu featuring local ingredients – think smoked mullet, crispy-skin potato and dill, with turmeric margaritas.

The Sails Motel has rooms with a cheerful Palm Springs vibe from $125 per night. 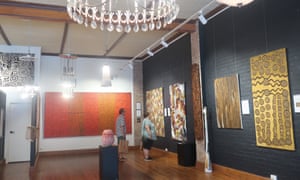 Back in the 80s, Bangalow was probably best known for the shop Abracadabra with its TV jingle: “Abracadabra right on the highway, west of Byron Bay, the biggest bunch of baskets under the sun, come in and say g’day.” The “happy hippy shop” is still there, selling boho dresses, incense, prayer flags and more, but Bangalow is now more hipster than hippie.

Ninbella is a gallery on the main street showcasing revered First Nations artists such as Clifford Possum Tjapaltjarri and Emily Kame Kngwarreye as well as several artists from the northern rivers.

Town Restaurant and Cafe, which has a seven-course degustation menu, keeps collecting awards, so you might want to book in advance.

If you feel like cooking yourself, pick up produce at the Bangalow market – one of the region’s most popular growers’ markets. They’re held on the fourth Sunday of every month at the town’s showgrounds. 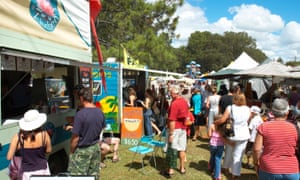 Sleep at 90 Byron Street, a heritage-listed house with eclectic decor from around the world.

Six kilometres south of Bangalow, Harvest has racked up awards and put the pretty village of Newrybar, with a population of 500, on the map. The restaurant employs a forager and wild food researcher, who unearths underused ingredients to make dishes such as local rainbow trout with native spiced broth, bok choy, kohlrabi and finger lime. It’s worth booking ahead. 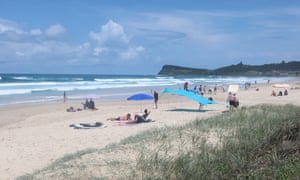 Move over Gold Coast: Lennox Head is a surfer’s paradise, attracting wave chasers from all around the globe. Climb the steps to the Pat Morton lookout where you may spot a dolphin, or if you visit between May and November, a whale.

The tea tree-infused water of Lake Ainsworth makes for a magical swimming spot with a healing history: Bundjalung women once bathed in the water after giving birth. It’s also a superb spot for canoeing, paddleboarding, kayaking and floating.

Penny Lane is great for brunch, with its French toast with smashed berries and whipped ricotta. The Point Cafe is popular for its coffee and smoothies, and Lennox Gelato & Coffee Co has the best ice cream in town. 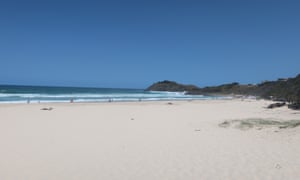 The good-humoured locals of Cabrita have a curious beach plaque that states: “At this precise spot, on the morning of December 12, 1927, nothing of significance is known to have occurred.”

The Bundjalung people, on basalt stone artwork on the main street, declare that Cabarita “is as it’s always been”. But the town is making waves. Most recently its beach was picked as the best in Australia for 2020 by “beach ambassador” (yes it’s a job) Brad Farmer. The long white stretch of sand has swathes of towel space, even during the holiday season, so it’s a relief for those who don’t love crowds.

Lap up the scenery that was featured in the film Aquaman on one of Journey Outdoors In Nature’s candlelit full-moon canoe trips, or on a kayak with Watersports Guru, paddling from Cabarita Lake through to Kingscliff.

While the beautiful, high-cost Halcyon House and its accompanying restaurant Paper Daisy have won dozens of design and dining awards, a stay at The Beach, which is a stone’s throw from the Surf Life Saving Club, is less than half the price. 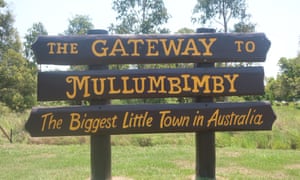 Inland, surrounded by green hills, the “biggest little town in Australia” lives up to its name. “Mullum”, as it’s also known, is a cultural melting pot.

Family-run Yaman Mullumbimby whip up a mean fawaffle (a cross between a falafel and a waffle) and other dishes from Yemen and the Middle East.

If you need a sugar hit, the Mullumbimby Chocolate Shop brings a local flavour to the classic small-town sweet store, thanks to vegan rocky road, vegan lolly lucky dips and chocolates shaped like surfer boys.

The highlight though, 10km from town at Montecollum, is the bedazzling Crystal Castle and Shambhala Gardens. Not your average crystal collection, it boasts the world’s tallest crystals, two 5.5 metre geodes, and a 120 million-year-old crystal cave, perfect for a selfie. “They amaze even the most experienced crystal fans,” says owner Naren King, who has sourced them over the past three decades from as far afield as Uruguay. 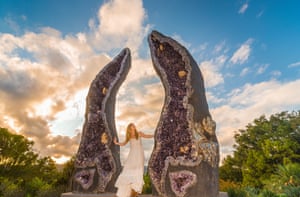 Should you require further healing, visit The Kiva Spa, not far from The Middle Pub, which also has accommodation. 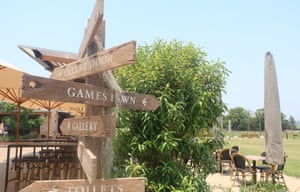 On the weekend it’s hard to move for all the visitors who come from interstate to Tumbulgum to waterski and fish. The Tumbulgum Tavern, the Tweed’s oldest, displays a portrait of the area’s 800 pound groper which was caught in 1828.

These days the quaint village is the home of Ink Gin, the world’s first natural colour-changing gin, thanks to a butterfly pea flower, and Australia’s only rhum agricole. Watch the magic of the gin for yourself and sample one during a Husk Distillers tour.

Cubby Bakehouse at Chinderah is about 12km away and is worth the trip for its sweets (think fairy bread macarons) and what they claim are “the bloody best baguettes this side of Paris”. It’s a huge call from Cubby, but they are pretty good.

A number of companies including Mount Warning Tours offer cruises of the area.

Hotel options are limited, but you can find Tumbulgum accommodation on Airbnb. 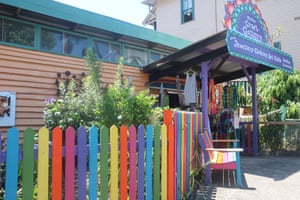 The town of Nimbin is Australia’s alternative lifestyle capital and “the last stop on the bus for many people”, says activist Michael Balderstone, the founder of the Nimbin Hemp Embassy, where you can sip a hemp frappuccino.

There’s more to Nimbin than drugs. A highlight is the Nimbin Candle Factory. Their hand-dipped creations are sold through independent grocers and health food shops, but they also keep “witches, wizards, goddesses and pagans” in business, says co-owner and treechanger Lisa Fry.

On the other side of the town’s former butter factory is the Bush Theatre with its Mulgum Studio, a comfortable place to crash overnight.

The Nimbin Bowlo, which must have the best signage of any bowling club in Australia, is a must-see. Around the corner is one of the town’s best-kept secrets, the free swimming pool.

Fantastic films to inspire your travels in 2019

What is United Getting With New CEO Scott Kirby?