Gazing out at a cold, bright winter sky, only the rising steam interrupted my view of the rolling Ardennes hills, framed by the twisted branches of bare trees. I was floating in one of a sprawling complex of heated spring water pools on a hill outside the southern Belgian town of Spa. It’s this connection between nature and wellbeing that makes the town, which has been visited for centuries as a place of rest and relaxation, so distinctive.

Despite having such a memorable name – which originates from the Latin Aquae Spadanae – Spa does not appear to be a major draw for overseas visitors; most people I overheard during my stay were locals. Perhaps it’s best known for the nearby Grand Prix racing circuit and of course for lending its name to one of the world’s most popular mineral waters, bottled here for 400 years.

Spa, a Unesco world heritage site candidate, is a thermal town with a Roman connection (Pliny the Elder wrote about the water’s healing properties) so can be compared to Bath in England. While the town doesn’t match Bath’s Georgian grandeur, it’s far less crowded, so instead of queuing for hours – as I did when I visited Bath Spa – we took a funicular ride from our hotel, the Radisson Blu Palace, and walked straight into the modern Les Thermes de Spa.

Although Les Thermes is housed in a modern building, the town’s heyday was in the 18th century. Walking around it with my mum, a long-term Belgium resident whom I had brought along for a birthday treat, we saw architectural signs of its illustrious past as spa town to European royalty, interspersed with Belgium’s iconic art nouveau maisons de maîtres, the tall townhouses with balconies adorned with flamboyant wrought iron swoops. 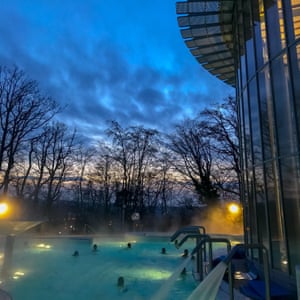 The real beauty, though, lies in the surrounding countryside. Belgium is often described as a flat country, but the two-hour drive south-east from Brussels sees agricultural plains give way to undulating hills, before ending up in the deep valleys of the Ardennes in the French-speaking province of Wallonia.

Spa is a great jumping-off point for countryside walks. We tackled one of the easier routes: the paths carving through the threadbare wintry forests surrounding Les Thermes and into the valley below. But there are also 10-mile hikes through peat bogs and mountain bike trails for the more adventurous. The neighbouring historic town of Theux is also worth a wander for both the architecture and the medieval Château de Franchimont. 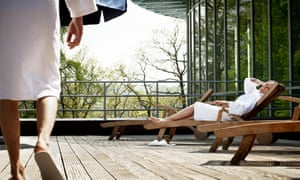 But the main attraction for us was Les Thermes de Spa (€21, child €16), a modern complex of pools sourced from the local Clementine spring and naturally heated to 33C. It’s filled with jets of water and Jacuzzis, and has an outdoor section surrounded by nature. We spent about four hours exploring the different areas of the spa, including sauna and steam rooms, relaxation rooms scented with alpine herbs, and sunloungers bathed in the warming glow of infrared light.

The connection with the surrounding natural beauty is what makes the spa so special: the complex’s huge bay windows look out on to the Wallonian countryside – even the sauna has a large window overlooking the valley. There’s also an in-house centre offering a variety of beauty and wellness treatments, and a cafe serving salads and open sandwiches with Trappist beers (a better combination than it sounds). 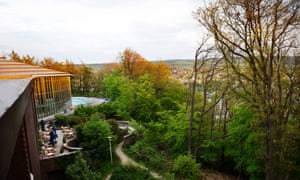 In fact, cuisine is also something that Spa does well. The town is full of cosy restaurants serving stews, croquettes and game dishes, often with sauces infused with local berries, and the local beer, Bobeline, which is given a distinctive flavour by the mineral water.

We visited La Belle Époque, a proponent of the “bistronomie” movement, which aims to reinvigorate simple French/Belgian bistro classics with a modern twist. The laidback restaurant is decorated with 1920s art nouveau mirrors and vintage posters from Paris, though the food is as much Belgian as French: croquettes and moules-frites make obligatory appearances on the menu. Our meals were freshly made, prettily presented and locally sourced; with venison served in tender pink medallions in elderberry sauce a highlight. 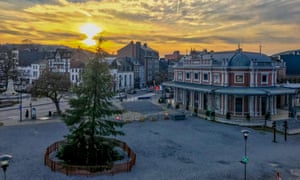 Walking back to our hotel, we commented on the town’s sleepy feel. Although the period of our visit, between Christmas and New Year, is considered peak season and our hotel was busy, the pace was slow and there was a sense that everyone had a shared aim: to relax. After all people have been doing that here for hundreds of years.
• The trip was provided by Wallonia Belgium Tourism. Doubles at the town’s Radisson Blu Palace Hotel cost from €116 B&B

Diamond Princess cruise: Worker on board says crew are at greater risk of coronavirus

Reed Travel Exhibitions has postponed the inaugural edition of IBTM Asia Pacific. The event will now launch in Singapore on April 13th-14th next year. The decision was taken following the…
Recent Posts
We and our partners use cookies on this site to improve our service, perform analytics, personalize advertising, measure advertising performance, and remember website preferences.Ok