‘If it doesn’t fit, it fits perfectly,” is something of a buzz-phrase in Poland’s third-largest city, and it doesn’t take long to see why. It is a place where the next surprise – a fantastical, seemingly incongruous unicorn sculpture, a courtyard in which the buildings are clad with irregular shards of broken mirrors, a two-storey piece of gable-end street art intended to be viewed through 3D glasses – is never far away.

Łódź (pronounced woodge and meaning boat, despite being landlocked and without a major river) is an urban sprawl slap-bang in the middle of Poland, around a two-hour drive west of Warsaw. In the 19th-century it was one of the centres of Europe’s textile industry but fell into decline after the second world war. It’s now on the rise once more.

The flat, green “Manchester of Poland” (so called for its manufacturing heritage) is doing a fine job of reinventing itself, and its regeneration from crumbling post-Soviet backwater to modern European city is celebrated whenever possible. Those surprises start on arrival at the enormous, eerily quiet Łódź Fabryczna railway station, a huge subterranean Death Star-esque building that is the third-largest station in Europe – despite the city’s population being less than 700,000. Łódź Fabryczna is testament to the city’s aspiration to supplant Warsaw as Poland’s central travel hub. 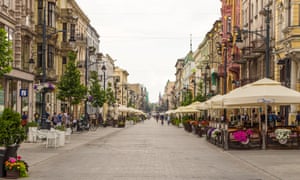 A lot of Łódź is based around one street – Piotrkowska – which might make the place sound like a one-horse town until you consider that it is more than 4km long. The northern half of the street, between Liberty Square and the Piotrkowska Centrum tram station (dubbed the “unicorn’s stable” for its colourful, wave-like roof, which eventually led to the addition of the aforementioned sculpture) is the most interesting for visitors, with its shops, bars, cafes and restaurants. The other half is worth investigating too, and I found the seemingly endless, straight cycle along the street’s full length a meditative activity in itself, while a ride around the idyllic Reymonta Park near the street’s south end was a bonus. 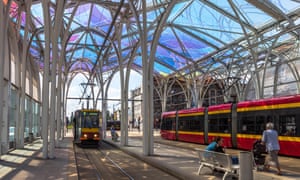 There is a comprehensive network of buses and trams (single-journey ticket 60p) and the Łódźki Rower Publiczny public bike system can be used by non-residents after a registration process. My hotel, the newly opened Puro, also included free use of bikes as part of its room rate. 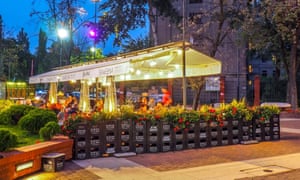 The city’s modernisation has led to an increase in the quality and range of cuisine on offer alongside Polish staples such as pierogi (filled dumplings) and flaki (tripe soup). I had thick, tender sirloin steak (£13) and homemade lemonade (£2.50) at Bawełna; it is one of dozens of smart-but-informal restaurants in the old industrial buildings of Manufaktura, a retail and leisure area redeveloped in the mid-2000s. Manufaktura’s museums, stores and play areas (in summer its central area is an artificial beach, in winter an ice rink) are geared towards families. Whereas, at OFF Piotrkowska (as the name suggests, just off Piotrkowska), there are boutique stores, food trucks, cool restaurants and bars clustered around a courtyard that hosts live music and other events.

Ato Sushi is considered one of the best sushi places in Poland. I’d no reason to doubt this as I tucked into delicious chunks of grilled octopus with a soy glaze (£10) and a fresh maki set (£10) – all of it prepared in front of me. The same people also run Ato Ramen at OFF Piotrkowska. Neapolitan-style pizza is common in Łódź, and at Forno Nero – an unshowy spot in a side-street off Piotrkowska – I had a wonderfulcrispy diavola (£6.30) – and generously sized Aperol spritzes (£4). 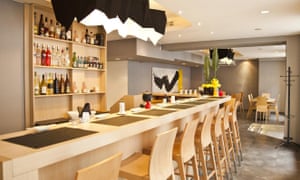 For a fix of traditional Polish food head to Piwnica Łódźka. Starters of a succulent beef tartare (£3.70) and zalewajka (potato soup with bacon and marjoram, £2.30) did for my appetite, and I barely made a dent in a main course of a crispy, well-seasoned pork cutlet with knedle (dumplings filled, unexpectedly but not unpleasantly, with strawberries, £8). 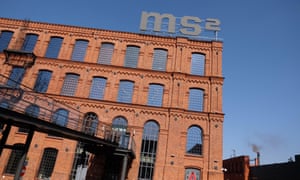 My visit coincided with the 18th annual Fotofestiwal, during which exhibitions, film screenings, talks, children’s events and parties are held across the city each June. Anna Włodarska’s photography exhibition, (Un)forgettable, which captured Łódź’s crumbling buildings and backstreets just prior to regeneration, gave me a taste of the city’s history – andwas also a primer for its current metamorphosis. Right outside the exhibition venue (the Academic Centre of Artistic Initiatives) is Rosa’s Passage, the building that the artist Joanna Rajkowska spent more than two years covering in mirror shards, creating one of the city’s most beautiful and unexpected sights.

Several of the many huge, striking street-art murals in Łódź are preserved Communist-era advertisements. A notable one is the painting of a butterfly promoting the state-run Pewex shops (where jeans, Coca-Cola and other imported goods could be bought with illicit US dollars) at 21 Henryka Sienkiewicza. Many more pieces by Polish and international artists have been added in the last decade: this map shows where to find them. 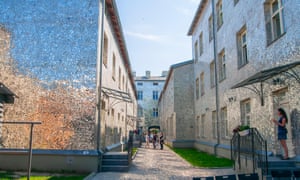 The Manufaktura complex has several major museums and galleries celebrating different aspects of the city. I visited the Museum of Art ms2 (admission £3.20, closed Mondays) and toured its three-floor collection of modern art by international and Polish artists. The Museum of the Factory (admission £2, closed Mondays) is a great way to understand the city’s history and has a viewing tower (extra 60p), with an aerial view of the Manufaktura site. The Museum of the City of Łódź (admission £2, closed Mondays) is inside Izrael Poznański’s Palace, an extraordinary neo-baroque building that was the textile magnate’s (1833-1900) residence. It is crammed with artefacts and has rooms that celebrate the life of the legendary pianist Arthur Rubenstein. He was a native of the city who can also be found playing the piano (in statue form) on Piotrkowska and pulling his ears out in apparent mockery in one of the city’s most notable and colourful gable-end murals.

As the home of the National Film School (graduates include Roman Polański, Andrzej Wajda and Krzysztof Kieślowski) – one of the most prestigious in the world– Łódź is the Poland’s movie capital. The Museum of Cinematography has an extensive collection of film posters, artefacts, equipment and memorabilia.Though it has closed for refurbishment until 2020, it will continue to host some events and workshops – and its cinema remains open.

At the outbreak of the second world war, Łódź had the second-largest Jewish community in Poland (more than 230,000 people, almost a third of the city’s population). The Nazi occupation saw 160,000 Jews forced into a small area of the city that became known as the Łódź ghetto. From here, thousands were deported to Nazi death camps, while those who remained suffered famine and disease. There is a huge Jewish cemetery on Bracka Street, where people from around the world still search for the graves of relatives killed during the occupation. 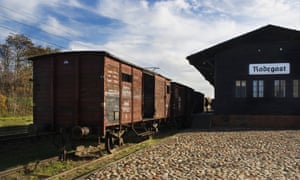 The Radegast railway station, from where Jews were sent to the death camps in cattle trucks, is a particularly haunting memorial. A locomotive and four original carriages are permanently at the platform, and official messages of apology and regret from European cities are displayed on the wall behind the station building. There is also the Survivors’ Park, where around 600 trees each honour a particular Holocaust survivor, plaques for each also line a walkway, and the Monument of Poles Saving Jews and The Marek Edelman Dialogue Centre sit amid lawns, wooded areas and a pond. 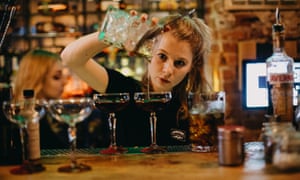 Live music and clubbing isn’t Łódź’s strong suit but there are a handful of places worth checking out, including the city’s one true underground club, DOM. There are also the ambient and experimental shows hosted by the small gallery and events space W Y and regular gigs and club nights put on by student radio station Studenckie Radio Żak Politechniki Łódźkiej. The multidisciplinary arts venue Fabryka Sztuki’s LDZ Alternatywa season comprises eight free shows during July and August, and covers Polish pop, psychedelic rock and jazz. 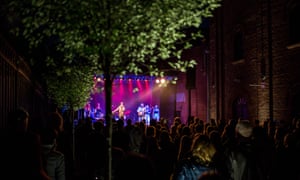 The bar scene is much livelier. Piwoteka Narodowa is an excellent craft-beer destination – try a taster tray of seven of the brewery’s own beers (£4.50): mine included two rich stouts, a fruity wheat beer and what I’ve decided was an “intriguing” horseradish ale. 6. Dzielnica is behind an unmarked door (at Piotrkowska 102) and up three flights of stairs; it has an extensive cocktail menu, plus a terrace and regular jazz shows. The bohemian-feeling Owoce i Warzywa has a similarly strong cocktail game (whisky sour £3.40).

Brush Barber Shop at OFF Piotrkowska is a barbershop by day and a cocktail bar by night. Don’t be put off by how hipster that might sound, as the superb cocktails (I had a deliciously tart Octello, £4) make it one of the best bars in town.

• The trip was provided by Łódź Travel. Ryanair flies from East Midlands and Stansted to Łódź from around £40 return. Puro Hotel has doubles from around £75 B&B. Non-fly options include Eurostar and ICE train to Berlin, overnight stay in Berlin, then train or bus to Łódź. More details at themaninseat61.com