The Stockholm archipelago is surrounded by clean waters, so the wild bathing opportunities are numerous. A good spot in the actual city is Långholmsbadet, a small beach on the north shore of Långholmen Island, where you can swim, relax on the sand or lawns, and there are plenty of places for a coffee or a meal. There used to be a prison here, which has now been converted into a hotel and hostel (doubles from £48 room-only). A few hundred metres to the west of the beach you can dive from the rocks at Klippbadet. On the way to the island, check out the hipster area around Hornstull, with its tattoo studios, cosy bars, restaurants and trendy barbers.
• Subway Hornstull 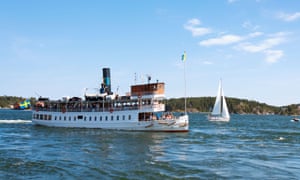 Stockholm’s archipelago is made up of around 24,000 islands, so a boat trip is definitely a good idea. Several companies offer short guided tours and longer trips. A steamboat ride is a good choice: the SS Blidösund, built in 1910 navigates the outer archipelago, while the slightly older Mariefred travels on Lake Mälaren, in the north-east of the city. Blidösund is also used for special tours to the more distant islands.
• SS Blidösund from £15 return, blidosundsbolaget.se; Mariefred from £7.20 return, mariefred.info 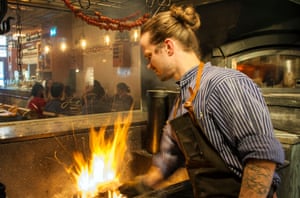 At Ekstedt, a fine-dining restaurant in the city centre, all the cooking is done with fire: in a fire pit, a wood-fired oven, wood stove and smokers. The chef/owner, Niklas Ekstedt, uses these 19th-century cooking techniques to create his version of new Nordic cuisine, with dishes such as hay-infused sweetbreads and salsify, birch-fired lamb with ramson capers, and flamed rhubarb. The wine selection is exciting and the service splendid. It’s not cheap, of course (the four-course tasting menu is £78), but it’s worth it for the changing aromas and the interplay of flavours and textures.
• Humlegårdsgatan 17, Subway Östermalmstorg, ekstedt.nu 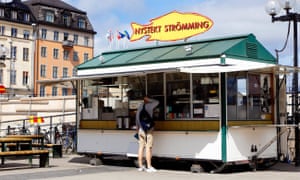 There’s a crucial difference between Atlantic and Baltic herrings. The latter is smaller and leaner, but also more complex in flavour. It is also the one used to make famously stinky surströmming – maybe the world’s foulest smelling fermented fish, mostly eaten by people in the north of the country. A better introduction to the world of Baltic herring is the kiosk at Kornhamnstorg in the old town, where it’s eaten fried on crisp bread – traditional poor man’s food that has become fast food (£3.50-£7.50). Another Swedish street delicacy is tunnbrödsrulle: sausages wrapped in a soft flatbread with mashed potatoes and – ta-da! – shrimp salad. Unforgettable, whether you like it or not.
• Kornhamnstorg 4, Subway Gamla 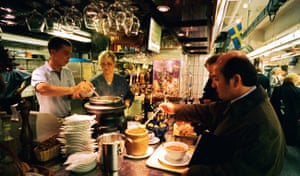 Stockholm has three major indoor food markets, and Hötorgshallen is the most down to earth, inexpensive and varied: as well as traditional Swedish sellers, there are foods from Latin America, North Africa, Finland, Central Europe and the Middle East. The queues are sometimes long but the quality is very good, whether you’re buying matured Swedish cheese, Finnish liquorice, merguez, duck fat, veal kidneys or the special fermented Swedish sausage isterband. The sellers outside on Hötorget Square have good mushrooms and berries, too.
• Sergelgatan 29, Subway Hötorget, hotorgshallen.se 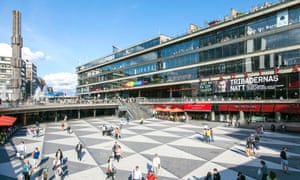 The centre of Stockholm doesn’t have the canals and green parks that are abundant elsewhere in the capital, but it has its own late-modernist charm. Kulturhuset is a friendly five-storey fusion of library, theatre, cinema, art gallery, cafe, tourist information and culture centre. Here, chess geeks, cinephiles, children, pensioners and sightseers all gather under the same roof – a good starting point for a visit. On the top floor is the Panorama cafe, with views of the city and decent sandwiches and salads.
• kulturhusetstadsteatern.se 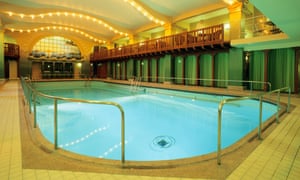 In Sweden, the sauna is a big thing. People mostly take saunas at home, but there are quite a few public bathing houses, known as bastu (Swedish for “sweat bathing”). One of the best is Centralbadet, which dates back to 1904 and retains its elegant Jugend (art nouveau) style. It is quiet, clean and spacious, decorated in shades of blue and purple, and you can relax in various pools, in dry and wet saunas, a steam bath or Jacuzzi, and also enjoy a beer or light meal.
• Session £24, including gym and spa, Drottninggatan 88, Subway Hötorget, centralbadet.se 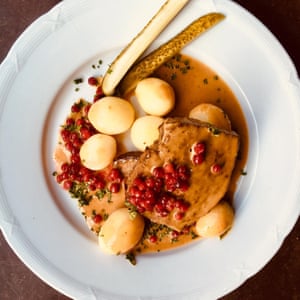 For traditional Swedish food in an old-fashioned setting, Tennstopet has it all: atmosphere, white linen, veteran waitresses and classic Swedish cuisine, including pickled herring, toast with shrimps and whitefish roe, pork and onion, and home-baked Swedish småkakor (small cookies).The daily-changing set lunch is £11. It’s famous as a haunt for spies, diplomats, actors, journalists and writers. The menu varies according to season, with special theme weeks like crayfish and surströmming in August, a goose supper in late autumn, hare in winter and a crow dinner (yes, really) in spring. On the walls hang paintings by the many artists who have dined here over the past century and more.
• Dalagatan 50, Subway Odenplan, tennstopet.se 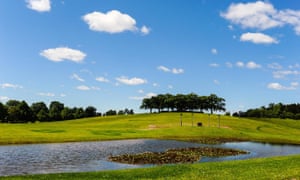 Swedes love nature and tranquility and there’s nowhere better to get a sense of this than walking among the trees, graves, chapels and woodlands of the Skogskyrkogården cemetery. The construction of this “graveyard in the woods”, a Unesco world heritage site, began in 1917 and the task of transforming the boggy terrain overgrown by pines into a burial place for over 100,000 people was led by cult architect Gunnar Asplund, who also designed Stockholm City library. From the nearby meditation hill, there’s a lovely panorama of the cemetery.
• Subway Skogskyrkogården, skogskyrkogarden.stockholm.se 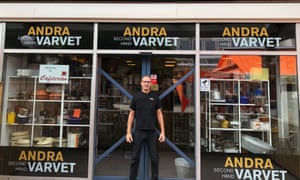 Högdalen, an unpretentious area in south Stockholm, is home to Andra Varvet, one of the city’s best secondhand stores. It’s a social enterprise that rescues porcelain, books, gadgets of all sorts, clothing, textiles, kitchen utensils, furniture and much more from going to the tip. Everything is carefully selected, cleaned and sorted. After shopping, head to the small, low-key cafe and refuel on cheap shrimp sandwiches and strong Swedish coffee.
• Högdalsgången 17, Subway Högdalen, andravarvethogdalen.se

Getting there
As an alternative to flying to Stockholm, see The Man in Seat 61’s website for train and ferry options. 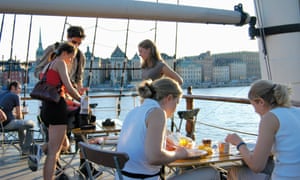 The AF Chapman & Skeppsholmen is a famous hostel on an old sailing vessel moored in the centre of the city, with beds from about £22 a night.

When to go
May to September, when the city is green, the streets alive, boats to the islands more frequent and the weather warm.

Jens Linder is a chef and food writer

Receive up to $800 onboard credit with MSC Cruises ·

Forest hideaway, Monmouthshire Overlooking the Wye Valley, near historic Tintern, Hill Farm is a 15-acre haven of woodland, meadows and streams, and home to Forest Retreats, run by Hayley and…
Recent Posts
We and our partners use cookies on this site to improve our service, perform analytics, personalize advertising, measure advertising performance, and remember website preferences.Ok