To understand Falmouth (and arguably the rest of our island nation) you need to understand its relationship with the sea. The cavernous National Maritime Museum Cornwall, a beautiful building in itself, contains several floors of exhibitions that explore the changing influence of the sea on our lives – stories of discovery, survival and tragedy – and an active traditional boat workshop. Highlights include the undersea gallery in which visitors can watch fish swimming in the harbour from the sea bed, and the 30-metre lookout tower from which they can track the comings and goings of naval ships, superyachts, dinghies and cruise liners.

The museum is popular with families who come for the performances, storytelling and treasure trails during the holidays, and warrants multiple visits, which is handy, especially when the weather turns.

Celebrating its 15th birthday in 2018, the museum was central to the regeneration of Discovery Quay, now the focus for the town’s many festivals. The museum’s major exhibition, Titanic Stories explores the controversies, myths and stories that surround the best-known sinking of the 20th century.
• Adult £13.50, child £6 (pay once, get in all year), open daily, nmmc.co.uk 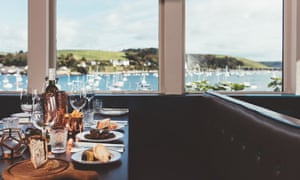 Once a spit-and-sawdust pub that served the crews of the Falmouth Working Boats, the Star and Garter, which opened in 1892, is now a smart gastro pub that prides itself on its nose-to-tail menu. The pub and the three self-catering apartments that sit above it command some of the best views across Falmouth harbour towards the Roseland peninsular on the opposite side of the Fal estuary. It is perhaps the best place on land from which to watch the regular squalls that blow into town, the brightly coloured topsails of the Working Boats as they race on the estuary during summer, or as they dredge for wild Fal oysters under sail in winter.
• One- and two-bedroom apartments from £120, starandgarter.squarespace.com 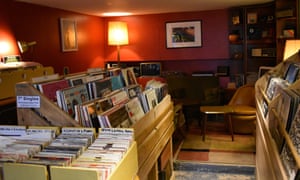 Falmouth has no lack of coffee shops, and while the cafe scene is dominated by Espressini, which has two outlets in town, it’s easy to overlook smaller cafes such as Jam Records, with its two cracked leather sofas and a selection of new and used vinyl. Visitors should expect eclectic music with their cuppa, shabby chic and a charming, if unexpected, display of typewriters, TV monitors and ancient Macintosh computers – which is somewhat indicative of how Falmouth rolls.
• 32 High Street, jamrecords.co.uk 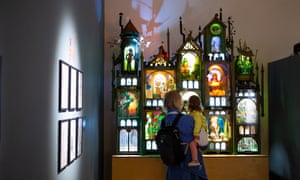 For a small town, Falmouth has an art gallery that punches well above its weight. There are only three exhibition rooms, so some of Falmouth Art Gallery’s best works are often not on public display. But ask nicely at the desk and you could get a tour of the storerooms, where paintings by the town’s two Royal Academicians – Charles Napier Hemy and Henry Scott Tuke – rub shoulders with paintings by Pablo Picasso, John Singer Sergeant and John Williams Waterhouse. In keeping with Falmouth’s playful bent, the collection also the proud possessor of a large automaton (pictured) showing scenes from Mervyn Peake’s Gormenghast fantasy novels, which is housed in the library on the ground floor.
• Free entry, closed Sunday, falmouthartgallery.com 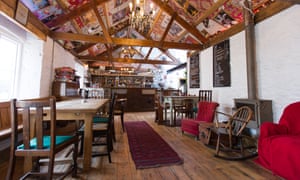 Two of Falmouth’s best bars are tucked away in Old Brewery Yard, which is also home to a gallery space, one of Falmouth’s most stylish restaurants, The Kitchen, and several small independent craft shops. HAND bar and bottle shop offers over 200 craft beers, and on a warm evening drinkers spill out into the yard and create the sort of atmosphere you’d expect to find in Berlin or Seville rather than Cornwall. The Chintz is a different matter entirely. The small, Alice in Wonderland-themed bar is gaudily kitted out in rococo style and offers wine, cheese and charcuterie. There are also regular live music. Expect –blues, retro soul, funk and jazz – and spoken word nights. 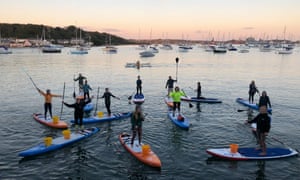 Aside from glimpses of the water through the opes – passageways between shops on the high street and the water – in the centre of town it’s easy to forget that Falmouth is a seaside town. But the best views of the town are from the water. The sheltered waters are perfect for exploring by paddleboard and WeSUP on Gylly beach organise tours, safaris of local shipwrecks, and sunset and night paddles exploring the coastline by headtorch.
• Two/three-hour tours £45/£55pp, wesup.co.uk 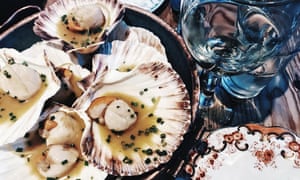 As you’d expect in a working harbour town, Falmouth excels at seafood. Book well in advance for the Wheelhouse Crab and Oyster Bar, an intimate, unassuming seafood restaurant that serves locally caught fish, crab, oysters and mussels. The small menu and wine list match the size of the bar, and food is cooked in an open kitchen. It is only open Wednesday to Saturday, and with only a handful of tables, it’s cosy, always busy and always worth the wait.
• Mains from £9.95, Upton Slip, on Facebook 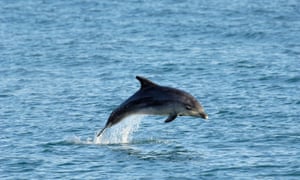 There are few towns in England which have a lookout for spotting seals, dolphins and basking sharks. Pendennis Point gives some of the best opportunities to spot sea life, as well as super-yachts making their way to Pendennis Shipyard, which fits out boats for the rich and famous. On a clear day it’s possible to see the Manacles rocks on Cornwall’s Lizard peninsula. The headland is dominated by Henry VIII’s iconic fort, Pendennis Castle, the gateway to Falmouth from the sea. Squint – to block out the modern boats and naval ships – across to the castle’s near-twin on the Roseland, St Mawes, and it’s possible to get an idea of what Falmouth was like almost 500 years ago.

Pendennis Point car park is also the starting point for an excellent walk on the South West Coast Path taking in three of Falmouth’s town beaches: Gyllingvase, Swanpool and Maenporth. 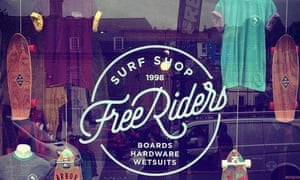 It’s easy to tell when there are waves worth surfing at Gyllingvase beach, from the hordes of surfers running down to the sea with boards beneath their arms. While many surfers favour Cornwall’s north coast, surf culture is very much alive in Falmouth. Independent surf shop Freeriders sells low-key surf wear as well as used and custom boards from local shapers. In a bid to become a hub for the surf community, it has recently added a cafe and cinema space.
• The Moor, freeriders.co 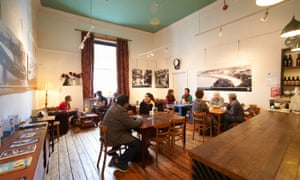 Falmouth’s creativity is visible in the number of independent craft shops in town, and the main street heaves with galleries. The highest concentration is at the top of the High Street and ranges from bookbinder Juniper Bespoke to local potters who create works while manning their shops. In the centre of town, The Poly (pictured) acts as a hub for Falmouth’s creative spirit, and combines a cinema, theatre, gallery, working pottery and exhibition spaces with a shop, which in itself is a showcase of makers who live and work in the area. As well as locally made jewellery and pottery, you’ll find bowls from woodturner Adrian Mitchell, and prints and designs from Falmouth artist Felix Packer.
• Church Street, thepoly.org

When to visit
In June, the town heaves with the dual hit of the Falmouth Classics sailing festival and the Sea Shanty Festival (both 14-16 June), a weekend of free sing-a-long shanties and shouts, which gets increasingly chaotic and fun as the weekend continues.

Getting there
GWR trains run to Truro; from there a branch line stops at Falmouth Town. FlyBe flies from various UK airports to Newquay (from £25 one-way from Gatwick), 30 miles from Falmouth.

Wyl Menmuir is author of The Many (Salt Publishing, £8.99)