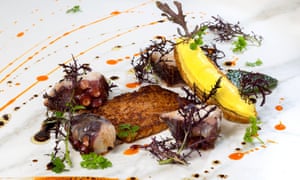 On a residential street 10 minutes’ walk from Estació de Sants station, La Mundana is casual and affordable, despite a well-deserved reputation as a critics’ favourite. The sharing dishes take inspiration from every quarter: try the steamed bun with oxtail stew (€4.80); a smoked lamb carbonara (€12.80) or red-prawn carpaccio with tarragon mayonnaise and a bloody mary gelée (€14). Book ahead or risk the long-ish wait for one of only a handful of tables.
• Carrer de Vallespir 93, dishes from €4.80, lamundana.cat
Sally Davies

We’re asking our readers for recommendations from their travels, with a selection of these tips being featured online. Each week, the best entry (as chosen by Tom Hall of Lonely Planet) will win two first-class Interrail Global Passes from Eurail that allow for seven days of travel within one month, and are worth up to £384 each (depending on the age of the traveller). To enter the latest competition visit the readers’ tips homepage 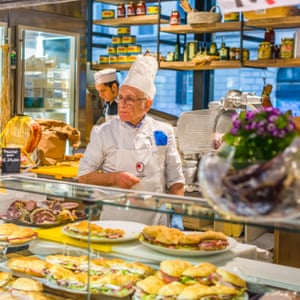 Inside Termini Station, Mercato Centrale thrums with 19 culinary artisans, each with their own stand. The canteen-style space was a recreation room for railway workers until its market reincarnation in 2016. Food spans fresh pasta swirled in the sauce of your choice and Chianina beef burgers to bowls of ramen. Worth queueing for are thick-crust pizzas made to order by Pier Daniele Seu, Stefano Callegari’s trapizzini (wedges of crisp dough brimming with meatballs and chicken cacciatore) and cheese boards courtesy of Beppe Giovale.
• Via Giovanni Giolitti 36, mercatocentrale.com
Alexandra Bruzzese

Paris-Moskau is a 10-minute walk from Berlin’s Hauptbahnhof station and its backstory intersects with Germany’s railway history. Built in 1889 as a railway signalman’s house, it was turned into a guesthouse and inn by a lemonade merchant who worked at Hamburg’s main station. Nowadays, it’s named after the Paris-Moscow train line and its rustic aesthetic is matched to a lovely summer garden and a fine-dining menu whose presentation is loosely inspired by Russian constructivism: think deer and rabbit, smoked eel and guinea hen, as well as vegetarian dishes.
• Alt-Moabit 141, mains €23, three-course lunch €22.90, paris-moskau.de
Paul Sullivan 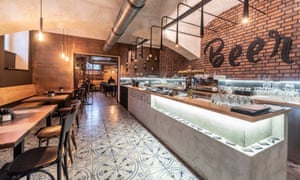 Despite its caveman-sounding name, this back-to-basics place opposite Hlavní nádraží (main station) is a classy joint. Opened in late 2018, it is Hoxton-diner in style: minimalist wooden chairs surround shiny copper tables and huge slabs of striploin hang in a large fridge. It uses local ingredients to give the likes of goulash, schnitzel and roasted duck a tasty twist. The lunch menu is great value (main and soup for €5) and the non-Czech dishes come highly recommended, too (pork ribs with apple horseradish, followed by gooey, chocolately Cognac tip).
• Washingtonova 23, mains from €7, meatbeer.cz
Mark Pickering 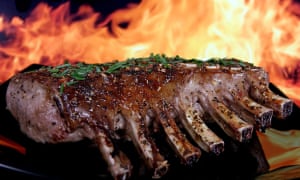 On the approach to the Gare du Midi/Zuidstation – facing the wonderful and enormous Midi Market on Sunday mornings – this used to be a Moroccan breakfast cafe but, in 2019, opened under new owners. It specialises in steak, which the staff recommend you eat “blue” to taste the quality, but will cheerfully cook to your liking. Try homemade traditional Belgian cheese or shrimp croquettes to start, ice-cream-based desserts to finish, and a house cocktail or mocktail, too. Service is in the original dining room or outside on the terrace, weather permitting.
• Boulevard Jamar 1B, mains from €13, laruchebrussels.be
Emily Waterfield 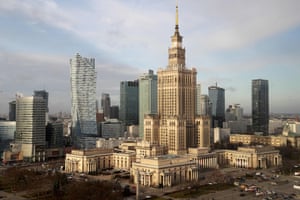 After the second world war, ruined Warsaw was rebuilt with a surprisingly modern aspect. The area around Warszawa Centralna, the main railway station, now has a high-rise glass-and-steel skyline reminiscent of an American metropolis. The first tower to go up, in 1955, was the Soviet-designed Palace of Culture and Science (PKiN). Once interpreted as an upturned syringe symbolic of Soviet oppression, it now screens Hollywood movies with Polish subtitles. It’s only a short walk from trains coming in from across Europe. The building has become so kitsch that it appears on the sleeve tattoo of the woman behind the bar at its ground floor cafe-restaurant and events venue, Kulturalna. Here, a bean–and-oyster-mushroom stew is served up for £5.50 and homemade cakes cost around £2.40.
• Plac Defilad 1, kulturalna.pl
Keith Lockram 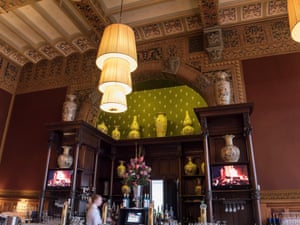 The high-ceilinged all-day restaurant on Centraal station’s platform 2B was once the waiting room for first-class passengers and retains much of this old-world splendour, with art deco lighting and intricately painted fin-de-siècle wall and ceiling decoration. The vast, traditional menu suits all budgets, ranging from sandwiches (from €6) and pancakes (€9.50), for lunch, to a three-course dinner (€34) with mains, such as duck in Grand Marnier and ribeye steak. Some come just for the €8 coffee and cake “combideal”. All are watched over by Elvis, an imperious cockatoo who struts along the bar.
• Stationsplein 15, accessible ticket-free via stairs near main entrance, restaurant1eklas.nl
Deborah Nicholls-Lee 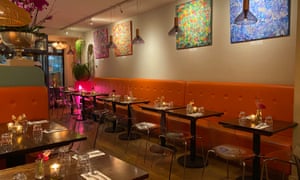 Bedecked in displays from the florist shop next door, Supawan raises a smile even before a bite has been taken of the punchy southern Thai food. For lunch choose between rice dishes (stir-fried aubergine with chilli and basil, served with rice and fried egg, for example) and spicy-sour soups. The dinner menu is more extensive, featuring zingy salads, noodles, rich curries and mains, including Gung Ob Woon Sen (steamed king prawns, with glass noodles, pork belly with ginger and Star Anise). Both menus have plenty of vegetarian options. A world away from the Instagrammable joints popping up in the restored railway arches of Coal Drops Yard, Supawan is loved by locals, visitors and food critics alike: former Guardian reviewer Marina O’Loughlin described reeling out “gobsmacked with pleasure”.
• 38 Caledonian Road, lunch dishes from £9.50, dinner mains from £13.50, supawan.co.uk
Isabel Choat 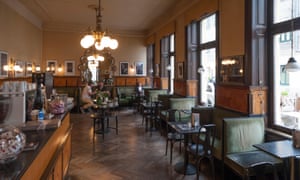 Just a few minutes walk from the Hauptbahnhof in Vienna is this wonderful art nouveau cafe dating back to 1910. With its Bentwood chairs, green-velvet booths and mirrors, the place looks like a relic but, in fact, a decent curry (€13.90) or panini (€7.90) can be picked up. Built to entertain railway workers, it had a revolutionary socialist tradition resisting Nazi influences right up to 1941. The clientele are mainly locals and the atmosphere is down to earth. Good for coffee and cake during the day or a beer and a game of billiards until early evening (it closes at 8pm daily).
• Argentinierstraße 49, cafegoldegg.atis
Christopher Brennan

Macao sets the table for a mouthwatering 2018 ·

A statute of First Lady Melania Trump has been called ‘hideous’