Early evening at the Z Hotel Bath and the reception and lounge are full of clinking and chatter with people guzzling wine and munching cheese. It could be a special event – a conference maybe? Except, the crowd is an unusual mix: glamorous hen parties, American tourists and young couples.

Daily, between 5pm and 8pm, it’s cheese and wine time at the hotel – and they come free for guests. Far from dry slices with curled up corners, this sort-of aperitivo time features local producers (Somerset goat’s cheese and Paxton’s Cave-Aged cheddar, from Gloucestershire) and decent wine: a choice of two reds, two whites and a rosé. No wonder everyone’s filling their boots.

“It’s been a great success,” says duty manager Batsy Cardozo. “Sometimes we can have more than 200 people and get through dozens of bottles. We want people to socialise, and everyone’s really friendly.” 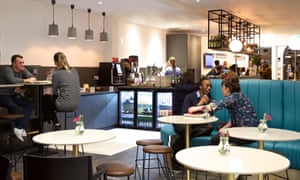 For a budget hotel (doubles from £45 in the week; weekend prices can rise to £150), it’s a nice touch and a fun way to start an evening out. I also overhear people swapping tips on places to go next.

Bath has long had a hotel problem: there are luxury options, such as the Gainsborough Bath Spa and the Bath Priory, some uninspiring budget chains but little of note in between (the new Eight hotel and soon-to-come Broad Street Town House may make notable exceptions). Z Bath, which opened last September, offers something interesting at the affordable end. Launched in Soho in 2011, the Z brand promises “affordable luxury” and a welcoming atmosphere in central city locations. There are now eight in the capital, with two more imminent, as well as properties in Liverpool and Glasgow.

The Bath hotel is in the middle of the action: opposite the Theatre Royal and less than 10 minutes’ walk from Bath Spa railway station. I arrive on a sunny Saturday afternoon and the area is crowded with tourists packing out the terraces of the restaurants around Saw Close. 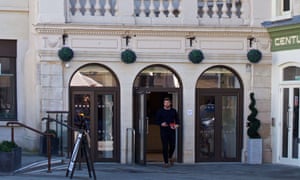 Despite all that cheese and the wine, there isn’t a bar or dining room at Z. There is, however, a food-and-drink menu that is served 24/7 and brought to your room – or delivered to the lobby until 1am. The idea is you sleep here and spend most of your time out: the 149 rooms are small and the internal ones have no windows, which is a bit claustrophobic but fine for a night or two.

The design makes the most of the limited space, though, with the emphasis on essentials. My room, with views over the city’s rooftops to hills beyond, is minimally decorated in white and grey but has a big comfortable bed with organic linen and an en suite with power shower and complimentary toiletries. The towels are of a calibre you’d find in a much posher hotel and there’s a kettle with hot chocolate and coffee selection, plus some very good blackout blinds. I heard the odd reveller heading to bed in the early hours but apart from that all was quiet, despite the parties going on nearby – gig and comedy venue Komedia Bath is next door. 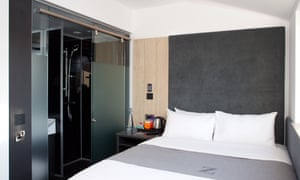 There are many breakfast and brunch options in Bath (from Bill’s on Cheap Street to Rosario’s Italian cafe on Northumberland Place), but Z makes a good bid for your custom with its £6.95 option, if booked in advance (£8.95 on the day). For that you can help yourself to bacon or cheese and tomato flatbreads, plus a generous spread of fruit, yoghurt, cereals, pastries, bread, tea and coffee.

I head out into the sunshine and spend the morning strolling past the attractions that draw so many visitors to Bath: honey-coloured Georgian crescents, the Roman Baths, Thermae Spa and the Jane Austen Centre. But it’s away from the crowded tourist centre that I’m happiest, at the Artisan Quarter around Walcot Street and London Road (flea market on Saturdays), where there are design and homeware stores, galleries and exhibition spaces, as well as vintage boutique The Yellowshop and Ghetto Funk Records. 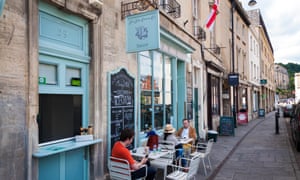 Over the summer there’s a lot going on in Bath, from Pub in the Park (21-23 June) and carnival (13 July) to the Jane Austen Festival (13-22 September). It’s such a popular place for tourists – and always busy with parents visiting their university student children during term time – that accommodation does get busy and pricey. If you want your hotel to reflect the city’s grandeur, perhaps Z is not for you. But for a central location, competitive price and friendly atmosphere, it’s hard to beat.

• Accommodation was provided by Z Bath, which has doubles from £45

• Eat
I love Corkage; it serves fantastic tapas and the waiting staff are knowledgeable enough to talk you through the menu. It started as a pop-up but was so popular it became permanent. The crab on toast is amazing.

• See
The Francis Gallery on Lansdown Road was opened earlier this year by Rosa Park and Rich Stapleton, who are behind Bath-based Cereal magazine, and has work from international artists on display.

• Drink
You’ll find Wolf Wine in a wooden shed in Green Park station, only a couple of minutes’ walk from the city centre. It sells organic, biodynamic and natural wines from around the world, and puts on monthly tasting events. Green Park station itself – it used to be called Queen Square station – is home to a market dominated by local crafts and food producers.

Americans Credit Road Trips and the Outdoors With Saving Their Sanity

Who pays for quarantine hotels?

Flying from Auckland to Perth aboard Air New Zealand