With the Hawkesbury River to the north, the Royal national park to the south, and mountains and highlands to the west, you don’t have to travel far from Sydney to feel like you’ve escaped. When you’re trapped in crawling traffic on one of the city’s arterial roads, however, even short distances drag on.

Free from traffic and toll roads, Sydney’s local and regional train network can be pretty time- and cost-effective when it comes to skipping town. Before you attempt any day-long adventures via public transport, download the TripView app for travel times, and always check for track work.

1. For a taste of river-folk life: Dangar Island 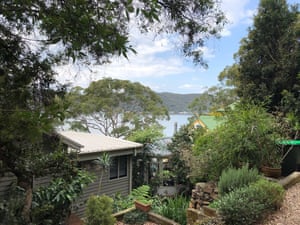 Accessible only by boat or ferry, Dangar Island on the Hawkesbury River is lush, hilly and laidback. There’s a safe swimming beach, heritage-listed blackbutt trees and an Aboriginal sandstone carving at the island’s highest point, Kiparra park.

Best of all, the island is car-free, which means no whoosh of traffic or fear of freely meandering across the roads. The 300 or so locals use wheelbarrows to cart their things around, while the schoolchildren leave their bicycles in a shed on the pier. The island has a bohemian air, with rambling verandas, Tibetan flags and rope swings spied in its abundantly bushy backyards.

On a shady, two-hour island loop you’ll see the shared island buggy doing the rounds and some ingenious rigs, including rails running from the road to one local’s house to lug things up. You can picnic and swim at Bradley’s beach or do lunch at the island’s only drinking hole, Dangar Island bowling club. The final polish on the idyllic picture is a posse of locals tending a communal vegetable garden next to the bowling green. Planted in boats, of course.

Getting there:
The central coast and Newcastle (CCN) train runs from Sydney’s Central station to Hawkesbury River station at Brooklyn (60 minutes). The Dangar Island ferry leaves from Brooklyn (15 minutes).

2. For a walk and wild swimming: Karloo pools 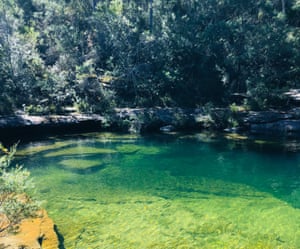 This 11.3 kilometre hike (roughly 4.5 hours) along the Royal national park’s Uloola track ticks some rare boxes. It begins (Heathcote) and ends (Waterfall) at a train station, you can see both a waterhole and a waterfall and, in spring, it blooms with flannel flowers, purple native iris, bell-shaped native fuchsia, masses of yellow Pultenaea villosa (commonly called “egg and bacon”) and even a towering Gymea lily or two, found only in the Sydney basin bushland.

The perennial foliage is beautiful too, with plentiful heath banksia, grevillea, bottlebrush and a stand of slim-limbed eucalypts with lustrous silver bark. We see a goanna up a tree and other lizards leaping between branches. Karloo pools are an hour’s walk from Heathcote, with plenty of shade and good spots to clamber in for an icy-cold dip. Lying on the sun-warmed rocks to marvel at the water is bliss too, given that waterholes are usually stained brown by leaf tannins and are rarely so emerald and rippling lime-green.

The coastal scrub intermittently clears during the walk’s second half to reveal the Sydney skyline, softened by distance, like a watercolour on the horizon. The last 5km stretch along a flat fire trail and, because Waterfall is the last stop on the line, water, toilets and a seat on the train itself will be waiting on the platform.

Getting there: The T4 line train runs from Central to Heathcote (50 minutes) and back from Waterfall (55 minutes).

3. For country crafts and antiquing: Mittagong 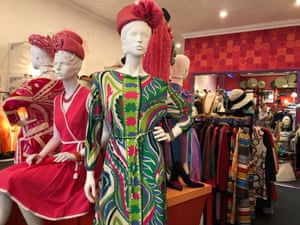 The chief charms of Mittagong in the southern highlands are antiques, food, gardens and both craft and craft beer. At Australia’s oldest arts and craft centre, Sturt, you can browse an all-Australian collection of elegant furniture, metalwork, ceramics, jewellery and textiles. Or just scoff scones and jam in the cafe.

Mid-morning coffee is best at The Boston’s ivy and stone-clad 1800s cottage, followed by Mittagong Antiques Centre, with its specialist stalls of toy cars, 1970s picnic ware, military paraphernalia, midcentury decor and every (old) thing in between. Twisting Vintage, meanwhile, is a polyester colour explosion of ladies’ wear and accessories from the 60s and 70s in such mint condition it’s more like a fashion museum.

Tiny house holiday: can a family of four fit in a 15-square-metre space?

The Shaggy Cow melds a relaxed cafe feel with fine seasonal food that’s not too salty in a room that’s not too noisy. The local rosé and riesling are terrific, though the fresh sodas are even better. Walk off lunch with a stroll to Eden Brewery, which runs on green power and donates 10% of its profits to Oxfam. All beers in its low-lit bar are $5, while takeaway growlers and squealers come in innovative stainless-steel flagons that stay cold, sans refrigeration. Your first growler (the equivalent of a six pack) is $50 but the second is just $25.

Getting there: The NSW regional train from Central to Mittagong (90 minutes). 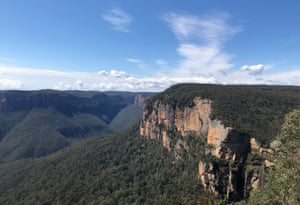 Feel superior as the crowds disembark at Katoomba and you head two stops further west to Blackheath – smaller in size but mightier in scenery. The Anonymous Cafe is close to the train station so fuel up on its trademark all-day breakfast and organic sourdough. Pack some pastries and a local Hillbilly apple cider (yes that’s on the menu) for the 40-minute backstreets walk past Blackheath’s weatherboard cottages to the national park entrance.

The Clifftop Walk takes you between two of its best vantage points: Govett’s Leap and Evans lookout. The former is a classic Blue Mountains panorama of the Grose Valley, with the calls of eastern whipbirds ricocheting up from the dense bush.

The 6km (roughly three-and-a-half hour) walk hugs the cliff and breaks into other lookouts along the way, each of them precipitous; one with a view of the hanging gardens. We see flame-shaped waratahs, eastern yellow robins and yellow-tailed black cockatoos riding the valley thermals. The return steps are steep but the lure is afternoon tea and a ramble through the antique warehouse of Victory Theatre Cafe or some record shopping at the Blue Mountains’ best music and art print shop, Hat Hill Gallery.

Getting there: The Blue Mountains (BMT) line train from Central to Blackheath (2 hours and 12 minutes).

5. For art and natural beauty: Bundeena 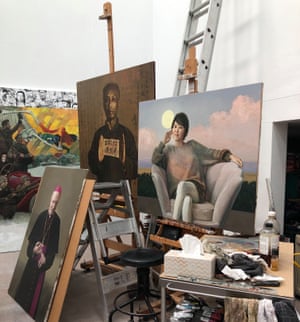 The coastal village of Bundeena is known for the seclusion that comes with being surrounded by the Royal national park. It’s best visited on the first Sunday of each month for its monthly art trail, when the community’s artists open their studios for the day.

The trail is a lucky dip dominated by landscape artists, and ranges from chatty hobbyists and classical pianists to the studio of the Chinese-Australian portrait artist Shen Jiawei, who’s been nominated 14 times for the Archibald prize and won the Sulman prize in 2006. Jiawei is there talking people through his current epic endeavour: immense canvasses packed with the faces of every notable communist in history.

Bundeena is the traditional home of the Dharawal people and Jibbon beach has a midden and some well-preserved Aboriginal rock art, including an orca whale carving. If you book a guided tour (through the visitor’s centre) ask about the Gweagal Shield – an artefact still controversially held at the British Museum and seen as a symbol of resistance during Captain Cook’s first encounter with Aboriginal people at Botany Bay. Between May to October, you’ll probably see a humpback whale if you hang long enough on the flat coastal rock formation called the Balconies.

Getting there: The T4 line train runs from Central to Cronulla (47 minutes). Ferry to Bundeena (30 minutes) from Tonkin Street wharf.