Episode one of Dynasties follows a troop of western (or West African) chimpanzees, led by alpha male David, in Senegal. This subspecies of chimp (one of four) is now critically endangered, and there are few opportunities to see them in their natural habitat. Senegal is also relatively new as a tourist destination and organised holidays focus mainly on the country’s cultural highlights, such as the Unesco-listed island of Gorée, and bird-watching in Djoudj national park. 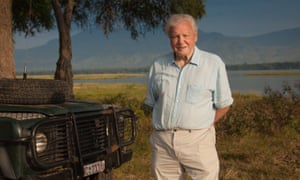 To see these chimpanzees in their natural habitat, visit Tiwai Island on the Moa River in Sierra Leone (2-3 hours from Freetown by car or bus), which has a wildlife sanctuary with 11 species of primate, and is thought to be one of the few remaining places travellers are likely to see western chimpanzees in the wild. Forest walks start from around £5. Admission costs £12 for the day, and there are also options to stay overnight, such as at a B&B lodge in the village from £26pp.

To see the eastern chimpanzee, which is also endangered, Kibale Forest national park in western Uganda has daily guided chimp tracking tours for £115. These last around three hours, with a maximum of one hour spent with the chimps, or there’s a six-hour Chimpanzee Habituation Experience, which gets closer to the animals for longer (£154, group sizes strictly limited, enquire and book online). Nearby Kibale Forest Camp has lodges from £46 a night. The park is around 5½ hours from Entebbe airport, where there are car rentals (such as Auto Rentals Uganda) from £35 a day.

Around 250 miles north of Kibale, Budongo Forest Reserve (four hours by car from Entebbe) offers two- to four-hour tracking (£70), with one hour with the chimps, or a full day’s habitation for groups of two (£177). Eco-cabins here cost from £70 a night B&B, or £27 for a dorm bed. 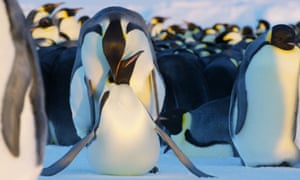 Episode two of the show follows 11,000 emperor penguins in Atka Bay in Antarctica, which is obviously harder to replicate as an affordable holiday. And although the emperor penguin population is said to be relatively stable (classified as “near threatened” rather than vulnerable or endangered), seeing them in the wild is difficult, due to the remote locations of the colonies, so routes and sightings aren’t guaranteed (even by high-end cruises) due to severe weather conditions and melting ice.

If you can afford an Antarctic adventure, some of the best options are cruises in smaller vessels where travellers have the chance to see other types of penguin, such as gentoo, chinstrap and macaroni, along with an abundance of other wildlife, including whales and seals. 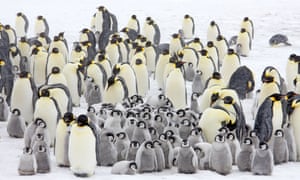 Intrepid Travel runs an 11-day Discover Antarctica trip, departing from Ushuaia in Argentina and sailing across the Drake Passage into the white continent (from £4,600, excluding flights). On some of the voyages, passengers have seen more than 200 whales surround the ship, though the tour operator says emperor penguin sightings are highly unlikely.

To reach remoter parts of the continent, the Antarctic Peninsula and Weddell Sea Cruise, also from Responsible Travel, takes people by helicopter to see the emperor penguin rookery on the south of Snow Hill Island (from £5,550, excluding flights). 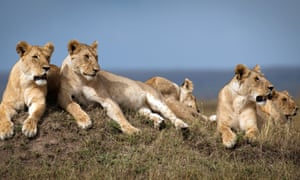 Episode three follows the Marsh pride in Kenya’s Masai Mara, made up of two mothers, cousins Charm and Sienna, and their cubs, who have been left alone by the males. Classified as vulnerable, estimates suggest there are as few as 20,000 lions left in the wild, with fewer than 2,000 in Kenya.

The savannah wilderness of Masai Mara national reserve (admission from £63) in south-west Kenya has an array of camps and lodging options (such as tents for two at Crocodile Camp, close to Telak, from £60, or Mama Safi Guest House from £62, close to Sekenani gate). Almost all camps offer 4×4 tours for around £120-£200 (some vehicles fit up to six people). It’s around six hours by car from Nairobi airport (car hire available from £40 a day, with Concorde). 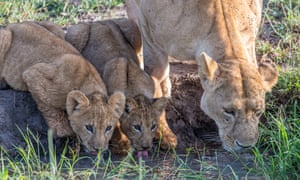 Another top spot for sightings is Ol Pejeta Conservancy in central Kenya (3-4 hours by car from Nairobi), which has 72 lions in the privately owned wildlife reserve, along with rhinos, cheetahs, elephants and other wildlife. The entrance fee is £65pp, lion tracking with a ranger from £30 and there are tented camps, lodges and homestays within the reserve from £35 (booking available for all of these online). 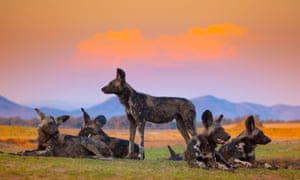 The pack of painted wolves in episode four of Dynasties lives on the banks of the Zambezi in Mana Pools national park, northern Zimbabwe, and is led by matriarch Tait. Also known as the African wild dog, they are now endangered, with fewer than 6,600 left in the wild. The BBC crew stayed at Vundu Camp on the banks of the Zambezi while filming, though at £8,795pp a week (with Wildlife Worldwide) it’s beyond the reach of most travellers.

Known for its walking safaris, Mana Pools allows visitors to observe wildlife from outside their vehicles (from a safe distance). As well as painted wolves, there are buffalo, elephants, hippos, crocodiles, cheetahs, hyenas and more, depending on the season. 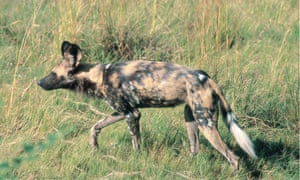 Entrance to the park costs from £15, with park-owned accommodation options including camping facilities from £23pp or four-person lodges from £80. Many visitors choose to explore on self-drive tours, renting a 4×4 in Harare, 41/2 hours from Mana Pools (from £100 with camping equipment or £70 without, manapools.com). Pack food and drink and head to Nyamepi Main Camp on the river bank (with bathroom facilities). Vehicle passes at the gate between £4-8 a day.

Hwange national park, in western Zimbabwe, also has relatively high numbers of painted wolf sightings. The Painted Dog Conservation rehabilitation centre (free, donations welcome) is opposite the park and helps visitors learn about the dogs, with the chance to see them up close in smaller enclosures (before they are released into the wild). It recommends renting a car (Victoria Falls airport, 45 minutes away, has several hire companies, including Budget, from £65 a day) and camping in the park, where painted wolves can be spotted at watering holes early morning and around 4pm. Park entrance from £8, which has camping from £23pp, or four-person lodges from £60, and there is a restaurant at the main camp.

Lodges and camping in both parks can be fully booked a year in advance, so early reservations are advised through the official Zimparks site. 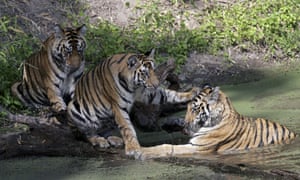 The final episode follows tiger Raj Bhera, fighting to protect her cubs and territory. She is one of around 80 Bengal tigers living in Bandhavgarh national park – the highest density of tigers in Madhya Pradesh, central India.

The best time to spot tigers here is early morning, from April to June. The park offers three-day tours, including two guided safari trips and accommodation, from £155. Overnight trains run from Delhi to Umaria (from around £15), and the tour includes the 30-minute ride to the car.

For a longer tour, including time in Delhi, Responsible Travel’s Tiger Watching trip (from £725, excluding flights) takes travellers from Delhi to Bandhavgarh national park and Kanha national park, two of the best places to see Bengal tigers in the wild.

Where to see African and Asian wildlife in the UK

Lions in Longleat
Longleat, in Wiltshire, opened in 1966 and was the first safari park outside Africa. Visitors can take a 2-3 hour drive to see two prides of African lions, along with lots of other wildlife.
• Feb-Nov, £29 online, longleat.co.uk

Painted wolves at Port Lympne
The 600-acre Port Lympne sanctuary is home to 25 painted wolves, along with gorillas, giraffe, bears and more. A breeding programme also means the park is currently exploring the potential of releasing some back into the wild in Africa.
• £20, aspinallfoundation.org

Tigers
Both Longleat and Port Lympne have tigers in a natural setting, although these are Amur (or Siberian) tigers rather than Bengal.

This Is How Devoted and Passionate Cruise-Goers Are

Travel: Is it possible to holiday during social distancing without breaking boundaries?