I’m sitting atop a red granite boulder with Rovin, my guide. Below us is a billowing green expanse of jungle broken only by the sinuous line of a river and a low range of hills, one of which we are seated on. There is no sign of humanity: no smoke pillars, no clearings, no masts or buildings, not even a jet trail across the sky. Instead, there’s a formation of six red-and-green macaws, cackling as they go, and in the nearby fig tree the flitterings of tiny, jewel-like birds in splendid emerald and sapphire livery.

“This area,” says Rovin, pointing ahead at a vast jungle contained in a natural bowl several miles across, “is unexplored. It belongs to our community, but no one has been there.” He pauses while a pair of black lizards skitter past. “We’ve had oil companies, loggers and gold miners come here, but we’ve said no to all of them.”

When I first considered visiting central Guyana, I found myself doing a cost-benefit analysis. On one side was the sobering amount of carbon dioxide produced by the return long-haul flight and three short internal flights – about 2.8 tonnes according to myclimate.org (see Carbon Calculation below). On the other hand – with a very large question mark next to it – were the potential advantages to communities visited in one of the least explored parts of South America, a country that saw fewer than 300,000 travellers last year.

I had thought this would be a difficult equation to balance. With the planet in the grip of a climate crisis, can there be any justification for such a journey? 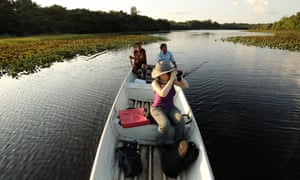 Rovin starts doing the maths for me. “We have about 350 square kilometres of jungle and have applied to take over another 350 of what is now state land. We get about 200 visitors a year and we want 400, no more. We don’t want to be rich, but we want to keep our forest. We do need money for medicines, education and supplies.”

Take away the tourists and the need for an income would soon drive these communities into the arms of loggers, ranchers, goldminers and oilmen.

Rovin is head wildlife guide at Rewa Ecolodge, run by members of the Makushi tribe, one of nine Amerindian groups in Guyana. The country is about the size of Great Britain but with only a tiny fraction of the population; some 780,000 people, most living on the coast. The vast interior is largely rainforest where tiny communities are often connected only by river. Such is the high rainfall, the mouth of the Essequibo, the country’s largest river, is as wide as the Channel at Dover.

After admiring the view, and birds, Rovin and I head down the narrow, rocky trail. At one point I stop in disbelief: some idiot has dropped a large triangle of iridescent blue plastic. I despair of humans. The first piece of litter in days. I bend down. It is a morpho butterfly. 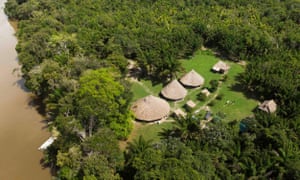 “You know what,” I say to Rovin, “your jungle is full of treasures that are better than gold or oil.”

He grins and points out a green-tailed jacamar, a bee-eater-like bird, perched in a confusing dapple of leaf and shade. The Guyanan jungle bristles and prickles around us: I notice tiny movements in the leaf litter and see ticks scuttling towards my boots, drawn by body heat. Later I remove one from my stomach. Look up and each tree is festooned with ferns, creepers and orchids. Glance down inside a fern and there, in the captured rainwater, swim tadpoles and frogs alongside all the insect larvae and eggs. No wonder this place gobbles up CO2. Calculations by an international team including Professor Oliver Phillips of Leeds University put the figure at around 200 tonnes per sq km per year (see rainfor.org).

Rovin brings me to the riverbank, where we board his motorised canoe. I tell him about solar-powered outboards. He had not heard of them. Stop the calculation! What if a tourist brings a useful idea? How does that fit into any equation? And don’t imagine the lodge would not take up new ideas: it’s already ditched diesel generators and gone entirely solar. 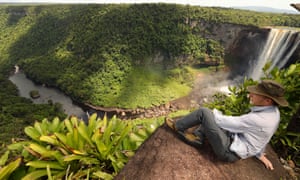 We move out into the river and spot something swimming. At first I think it must be a jaguar in the water, such is the power and agility, but it’s a giant river otter, almost two metres long.

“When we opened the lodge in 2005,” Rovin says, “we stopped the hunters coming in. Now we see more and more of everything: otters, macaws, jaguars.” There have been other benefits: men working on Brazilian ranches and in Guyanan gold mines have come home. The community is happier and healthier, generally pleased with what had been a difficult decision.

The Guyanan jungles are part of the Guiana Shield, a vast region of north-east South America, a biodiversity hotspot that is separate from the Amazon and contains more than 1,000 bird species and 269 known amphibians (more are constantly being found). Compare that with around 700 birds and 85 amphibians in all of Europe, which is almost four times larger. Many of these Guiana Shield species are endemic. A few days earlier I’d trekked through jungle near Kaieteur Falls (the biggest single-drop falls in the world) to see the spectacular Guianan cock-of-the-rock, a bird more orange than Donald Trump yet tweeting with more wisdom. 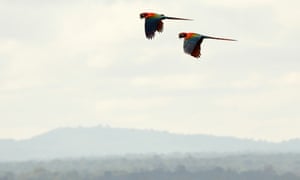 Back on the river, we take a side channel then transfer to a nearby oxbow lake and a paddled boat. The sun is dropping low over the trees as Rovin gives a deep belly growl that immediately gets a vigorous response with wild splashing noises from the reedbeds. “Black caimans,” he grins, then points one out. Next to it, something huge rolls and I glimpse a long, scaly back. “Arapaima,” Rovin whispers, the largest scaled freshwater fish, reaching up to three metres in length. Rovin is part of a team from Rewa community lodge who have pioneered the art of catch-and-release for these giants. In 2015 it resulted in a world record specimen of 189kg. Another arapaima rolls and an osprey flies over. There are harpy eagles here too, but we are not destined to be lucky in that department.

After returning to the clean and simple riverside lodge, we eat chicken and plantains for dinner. A pink-toe tarantula is removed from one cabin. That night I lift the lid on the outside toilet and a frog bounces up, hitting me in the chest. A rustle in the trees above alerts me to a kinkajou, something like a raccoon, but in a genus of its own. Dawn brings a symphony of birdsong: the liquid warblings of oropendolas underscored by the percussive rap of red-naped woodpecker and tuneless toucan screeches. A red-rumped agouti, looking like a guinea pig on steroids, scuttles away from the huts pursued by a crested caracara, a type of forest falcon with a Peaky Blinders haircut. 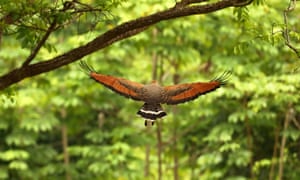 In the boat once again we move upstream, then walk into a forest of giant mora trees, a favourite hardwood for loggers who, no doubt, would love to get their hands on them. As we walk, my mind drifts back to my carbon calculations. If each visitor generates 2.79 tonnes of CO2, I muse, and there are 200 of them, that makes 558 tonnes (assuming they all came from as far as London). But look how much CO2 the Rewa community forests might be absorbing every year (350 sq km x 200): over 70,000 tonnes.

My ballpark mathematical reveries are disturbed by Rovin. In the gloom of the forest floor, he is shining a torch into a small hole large enough to insert a tennis ball. He is teasing something, twitching the tip of a stick at the entrance. There’s sudden movement and a creature pounces, a massive spider, bristling with annoyance. “Not a big one,” says Rovin. “Don’t go too close; they can fire poisoned hairs at you.” This nine-inch monster is the Goliath bird-eater spider, the largest tarantula on the planet (they can reach 12 inches across). Whether it does genuinely eat birds is the subject of debate, but Rovin has no doubt. “They ambush forest floor birds like the antpitta.” Pity the antpitta. A pint-sized squirt that meets its end under the arachnid equivalent of Mako Vunipola. If loggers came here, however, it would be these spectacular spiders who were crushed. 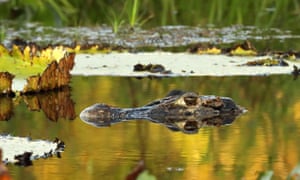 My time in Rewa is over and I take the boat 55 miles upriver before transferring to another community lodge: Surama. Here they have the Iwokrama forest and a similar population size to Rewa, around 300 sq km. They, too, need relatively small numbers of visitors to ensure their jungle remains untouched. Four other Amerindian communities have embarked on this type of tourism, but while the scope for more is huge, next year ExxonMobil will start pumping oil from offshore rigs, potentially transforming the Guyanan economy.

I walk alone to the edge of the jungle and watch a hummingbird work over the bushes. I’m wishing my trip was longer, as long-haul trips should be. Guyana has a reputation for being expensive, but there is scope to travel cheaply if you can sleep in a hammock. Buses and boats will take you all the way across country to the Brazil border – I recommend Waikin ranch if you’d like to see giant anteaters and great horned owls.

I drift up a path into the forest and watch a pair of macaws squabble on a high branch until a feather drifts down. I chase after it and stumble on a scarlet tail feather as long as my forearm. The jungle, it seems, is casting its treasures at my feet.

• The trip was provided by Wilderness Explorers, which is offering a 10-day Guyana package exclusively for Guardian readers for £2,000pp (a discount of 15%); the trip includes Georgetown, Rewa, Surama and Kaieteur Falls but excludes international flights (must be booked by 31 December, quote booking code GuardianGuyana). Flights from Gatwick to Georgetown via Barbados with Virgin/LIATfrom £650. Further info at guyanatourism.com

Hurricane Rosa Expect to Make Landfall in Mexico Next Week

Camp at the 'Door to Hell' on World Expeditions photography trip ·