If you’re visiting the Eden Project this summer, watch out for a huge predator roaming through the rainforest. If you’re feeling very brave, enter the Crater of the Tyrant King for an immersive experience where you’ll see the T Rex devouring its prey in a gory spectacle. Budding paleontologists can unearth a dinosaur skeleton in the dig pit and discover a real egg, fossilised brain and T Rex tooth at a dinosaur exhibition.
• 01726 811911, edenproject.com, adults from £19.95, children (5-16) £11.50, included in the cost of admission to Eden Project, until 2 September 2014 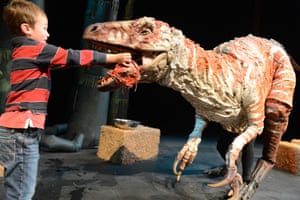 Dinosaur Zoo dares children to get up-close to life-like dinosaurs in an entertaining and educational stage show created by the Australian Erth company. The stars of the show range from cute baby dinosaur hand puppets to giant theropodas. Rather than the familiar T Rex or stegosaurus, the show introduces audiences to lesser-known dinosaurs of the southern hemisphere. Ever heard of a australovenator? And would you dare to put your head in its (albiet puppet) mouth? The audience can choose to sit in the “safe zone” or “danger zone” – where you never know what the dinosaurs might do next. The show runs for 50 minutes with a dino meet and greet after the show.
• dinosaurzoolive.com, touring the UK until November, ticket prices vary, from £12.50 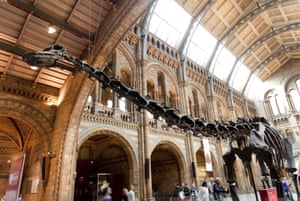 The iconic skeleton cast of the 26-metre diplodocus in the vaulted Victorian entrance hall (pictured) is impressive enough, but that’s just the start of the dinosaurian fun at the Natural History Museum. The dinosaur gallery covers 160 million years, hundreds of specimens and four moving animatronic dinosaurs, including the roaring, head-swinging T Rex. The museum also offers monthly kids’ sleepovers – including a torch-lit trail in the dinosaurs gallery – which have become so popular there is now an adult version, complete with three-course dinner, quiz and live music (book well in advance for both kids’ and adult varieties).
• 020-7942 5000, nhm.ac.uk, museum entrance free 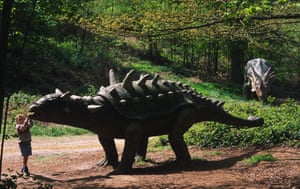 Kids can meet life-sized tyrannosaurus Rex, triceratops or stegosaurus face-to-face on the dinosaur trail at this Jurassic adventure park. Then they can play at paleontology, discover dino fossils, hop on a go-kart for the “raptor races” and have a game of dinosaur crazy golf. And there are also cuddlier attractions in the shape of rabbits, wallabies, sheep and donkeys at the animal farm, as well as a deer park. The adventure playground should ensure soundly sleeping children by the end of the day.
• 01603 876310, dinosauradventure.co.uk, adults £10.95, children (3-15) £15.95 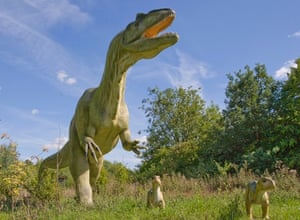 This attraction is part of the Gullivers theme park and offers a mix of fearsome dinosaurs and fluffy farm animals. A tour on the Jurassic River takes you through a dinosaur “lost world” and tree-top towers provide lookouts for spotting dinosaurs below. After exploring you can unearth the remains of dinosaurs at the dino-dig and visit the Reptile and Bug Centre to see iguanas, snakes, geckos, turantulas and scorpions. Then it’s over to the farm for tractor rides and all the usual animals. Camping is available at Gulliver’s campsite next door (from £7pp). 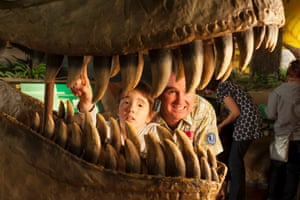 Dinosaur Isle at Sandown is an interactive museum that also houses over 1,000 fossils, dating back 126 million years, including those from some of the 15 dinosaurs known to have come from the Isle of Wight. There are also life-sized reconstructions, animatronic dinosaurs and a working labortory on the site.
• 01983 404344, dinosaurisle.com, adults £5, children £3.80, family from £16.50

Animatronic tyrannosaurus, megalosaurus and dilophosaurus are among the prehistoric creatures on the prowl in the Valley of the Dinosaurs, set in a 28-acre park in the North Devon AONB. There’s also a Dino Express train ride and a small museum displaying fossils (including a dinosaur’s nest) and films. As this is a wildlife park there are plenty of living animals to see too, including lions, wolves, otters, monkeys, wallabies and exotic birds.
• 01271 882486, wildlifedinosaurpark.co.uk, adults from £12.50, children (3 to 15) from £9.50 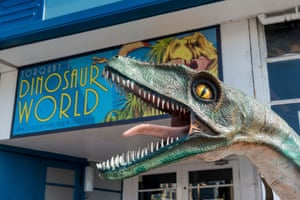 Torqauy’s new home to a whole host of dinosaur models, both scaled-down and life-size, set in scenes which capture their natural environment. The exhibition also offers an explorer quiz to complete as you wander back through time. The life-size dinosaur trail tests everyone’s bravery as you come face to face with triceratops, deinosuchus and smaller creatures such as hairy spiders. Kids can also discover rare fossils, bones and teeth for themselves in the excavation sight.
• 01803 298779, torquaysdinosaurworld.co.uk, adults and children £5.95, under 2s free 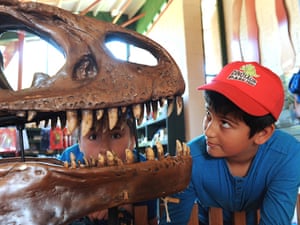 Walk the boardwalk keeping an eye out for 30 dinosaurs lurking in the swamp below – watch out for the hungry T Rex and be careful as you approach the dilosophaur or you’ll get wet. As well as the trail, there’s an adventure playground with diggers, rides, games, dino-golf, and an indoor play area for wet days.
• 01834 845272, thedinosaurpark.co.uk, adults £9.65, children £8.65, under 2s free 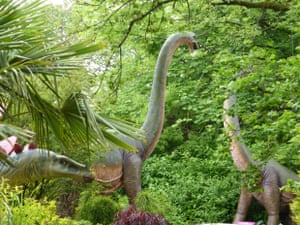 At DinoPark, Carrutherstown, you can wander through a DinoMine under a volcano … but watch out for all the dinosaurs in the dark. Apprentice paleontologists can dig for fossils and bones at the DinoDig, and listen to stories by rangers in the DinoDen. Exit through the DionShop, naturally.
• 01387 840632, dinopark.co.uk. Adults £2.50, children (2-14) £4.50

‘Magical’: Best caravanning site in the UK named – ‘ideal base’