Few people in these sophisticated times would claim for travel all the virtues once believed to be inherent in it. But it remains, for those who have the leisure and money, a fine way of putting in the time. To-day it is a primary source of income for so many countries that it is hard to imagine what they did before Thomas Cook came on the scene.

Cook, who was born 150 years ago to-day, was not content to be merely the father of modern tourism: he was a newspaper reporter as well. During his tours, when he was ever on the look-out for cheaper transport, better accommodation, and “points of interest,” he sent to some local papers in Leicester and to the “Times” assorted letters to the editor, and even a few commissioned articles, describing the scenic wonders along the route.

This aspiration towards higher things was evident, too, in his devoted temperance work, which was the original cause of his becoming interested in popular travel. For a fare of one shilling he had arranged in 1841 for 570 supporters to travel by open rail carriage from Leicester to Loughborough to attend a temperance meeting. Four years later he arranged a rail trip from Leicester, Nottingham, and Derby to Liverpool, and he was really in the tourist business. 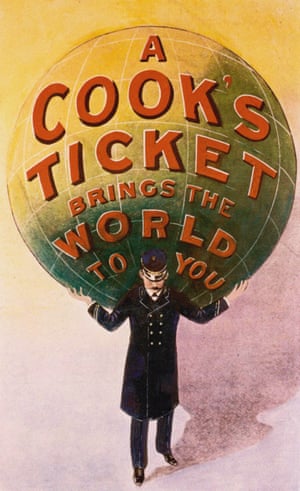 Song for the tunnel

The brochure produced for this rail trip contained a song written by a J. Bradshawe Walker, of Leeds, for the edification of the customers who were to sing it before entering the Summit Tunnel. The closing lines ran:

“But onward, snorting wild,
Like a monster in its glee,
The locomotive flies with us,
A passing sketch to see.”

The following year – 1846 – saw the first of Cook’s Scottish tours, which were to be the backbone of his business for some decades. The Scottish hosts showed enthusiasm for the English visitors: guns were fired in welcome as the train drew into the Glasgow station, bands played, and speeches were made. Could this unlikely affection for the English have sprung from a shrewd Scots appreciation of being in early on a good thing? Or had Cook sent on ahead his public relations men?

In 1866 Thomas Cook produced a book for the benefit of Sassenachs crossing the Border for the first time. The book was called Cook’s Scottish Tourist: Practical Directory: A Guide To the Principal Tourist Routes, Conveyances And Special Ticket Arrangements, Sanctioned By Railway, Steamboat And Coach Companies Commanding The Highland Excursion Traffic. One chapter heading ran: “Is It Safe For Ladies To Join In Highland Tours?” The answer was reassuring. The majority of tourists during the past twenty years had been ladies, all of whom had had a fine. safe time.

During the same period the tourists’ path had been beaten by Cook to North Wales, the Isle of Man, and Ireland, and he was ready to see what the Continent had to offer. The first tentative steps were trips from Leicester (which continued to be his headquarters until 1865, when he opened a large central office in Fleet Street) to Calais for people wanting to attend the Paris Exhibition in 1855.

The next year he advertised “a grand circular tour of the Continent,” which was to cover Antwerp, Brussels, Cologne, Frankfurt, Heidelberg, Baden-Baden, Strasbourg, and Paris. Then followed Swiss tours and Italian tours, and in 1865 Cook crossed the Atlantic to make excursion arrangements there.

Cook completed his own first trip round the world in 1873, and was able to offer in the same year a planned world tour, from London to London, for only 200 guineas or 1.050 gold dollars. By this time his son, John Mason Cook, was active in the business, travelling in the years between 1866 and 1873 376,000 miles. 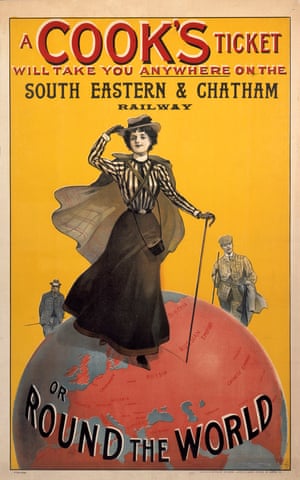 Thomas Cook and Son were one of the first firms to use, in the 1870s, travellers’ cheques, which they called “circular notes”; and rather earlier they introduced hotel coupons which gave bearers the right to demand accommodation at any hotel in the scheme. In days when Foreign Office officials and diplomatists had an easier time, it was left to Cooks to arrange General Gordon’s trip to the Sudan in 1884. He tendered to the company his “thanks for the admirable manner in which we have been treated while on your steamers.”

Now the company which Cook founded is the largest travel agency in the world. It became a private limited liability company in 1924, and in 1948 its shares, which were then held by railway companies, were acquired by the British Transport Commission.

Irish flights cancelled as strikes cause chaos in France

Get ready for Hokkaido's ski season! ·