Some views are worth travelling for, and the one from my terrace at Otentic Mountain, a new eco-retreat overlooking Mauritius’ sleepy south-east coast, is among them. By day, white-tailed tropicbirds soar over the forest canopy, macaque monkeys screech from the guava trees (which also shelter shy wild boar) and, in the distance, the occasional yacht drifts across the limpid turquoise sea. As night falls, tawny Mauritian fruit bats swoop to feast in the trees and the mountainside buzzes with a frog chorus.

Mauritius is best known for luxury hotels on palm-fringed beaches but I’m here to see its wilder side, with Otentic Mountain as my base. At the foot of Bambou Mountain, about two miles from the sea, it’s the second venture from Franco-Mauritian Julien Gufflet, who opened eco-camp Otentic River in the south-east in 2013. Otentic means “authentic” in Creole and both aim to offer a taste of the “real Mauritius”. 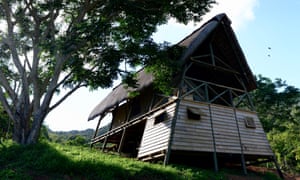 Built onto sustainable wood platforms and camouflaged among the trees, the retreat’s four solar-lit, safari-style tents sleep five to eight on beds made from recycled wooden pallets, plus there’s a chalet for two. The terraced permaculture gardens are alive with birds (around 100 Mauritius kestrel pairs live in these mountains) and without mobile reception or wifi, digital detox comes naturally and the sound of a mountain stream lulls you to sleep. Yoga and meditation are offered on a deck wrapped around a giant mango tree. 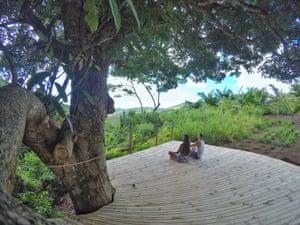 Aiming to encourage guests to go out and spend their tourist rupees, the restaurant (100% vegetarian, with much of the produce grown on-site) opens only in the evenings. So lunch might mean a wander up the road to Stéphane’s for Mauritian curries and rotis (about £9) at Laferm Coco, or a mountain bike ride along the coast to La Case du Pecheur, where chef Cindy serves locally farmed giant shrimps, lobster and crab, on wooden tables beside the mangrove (menu du jour, £22).

I slip into the quiet rhythm of camp life: morning hikes in the mountains – a steep scramble to the highest rock The Praying Virgin, at 630 metres, is rewarded with 360-degree views – afternoons idling in the natural pool and gardens. At sunset, guests mingle over a tamarind rum arrangé around the firepit, before lantern-lit dining on slow-cooked Mauritian specialities – jackfruit curry, breadfruit gratin. Head chef Christelle was selling chicken by the roadside before Julien brought her on board to share her grandma’s traditional caris, rougailles (curries) and chatinis (chutneys). 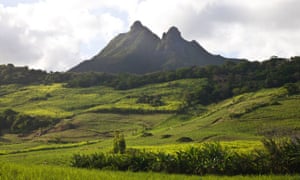 Daily shuttles make the 20-minute journey to Otentic River, in the village of Deux Frères, from where there’s a free morning boat to pretty Île aux Cerfs or watery eco-adventures, perhaps kayaking to Ilot Mangénie’s deserted beaches or a trip by motorised pirogue to tiny sandbar Îlot Flamants (Flemish Island).

Designed in a similar vein, Otentic River has 12-eco tents on the hillside overlooking Mauritius’ longest river, Grand Rivière Sud Est. Cosy and communal, it has a rainwater pool, with eco-activities including a kayak to a pretty waterfall in a craggy forested gorge where at twilight, oyster catchers perch on basalt boulders, monkey families search for Badamier (Indian Almond) nuts among the mangrove and fishermen, haul baskets of crab into wooden pirogues. 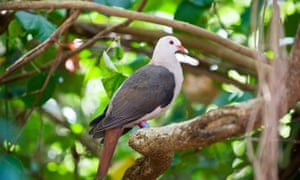 One afternoon, I take the local bus from Otentic Mountain to Mahébourg – the original port capital on the unspoiled south-east coast – with crumbling creole houses and views over Lion Mountain from its waterfront promenade. The coast road reveals centuries of history: from the place the first Europeans (Dutch) landed to the site of the Battle of Grand Port, where in 1810, the British fought the French for sovereignty of the island (and eventually won). Tiny forested Ile aux Aigrettes, at the mouth of Grand Port Bay, is thought to be the last resting place of the dodo, and on tours you’ll spot Aldabra tortoises, the Telfair’s skink and pink pigeons saved from extinction.

On my last morning hike in the Bambou mountains, my guide, Manu, points out a 500-year-old ebony tree. “I think this one saw the dodo,” he smiles. The dodo may be dead but, for the first time in a century, endemic pink pigeons and echo parakeets are breeding here again in the wild. As we sit cross-legged on a basalt boulder, soaking up the scenery, the birds remain elusive, but I feel as close to wild Mauritius as it gets.

• The trip was provided by the Mauritius Tourism Promotion Authority, tourism-mauritius.mu. Flights were provided by Air Mauritius (from £612 return), which flies from Heathrow direct. Tents at Otentic Ecotent Experience cost from £100 a night B&B, for a three-night stay, and sleep two adults and three children, or four adults. The best season to visit is October to April 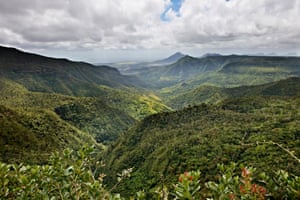 This privately owned estate in the south-west, with ziplining, river trekking and a palm-fringed natural pool, has three army-style tents with real beds, hot showers and terraces overlooking the Rivière des Galets – and there are plans to add more. Homecooked Creole food is served on an open-sided wooden deck nearby and sundowners on a mountaintop among Java deer and wild boar.
• Tents from £140 B&B (up to four people); meals from £12.50, chazalecotourismmauritius.com

This farm in the Chamarel highlands has five Creole-style self-catering chalets in tropical gardens, with fresh produce from the estate (and Mauritian meals and picnic baskets to order), plus a pool and rustic bar with mountain views. It’s one of the few places to offer horse riding and has guided hikes through the plantations.
• Double chalet from £82; breakfast/dinner £5/£11pp, lavieillecheminee.com

A natural swimming pool below pretty Leon waterfall and treks in the foothills of the Black River Gorges national park are highlights at the island’s newest campsite, with nine lodges in a private forest, overlooking the surf-sculpted south coast.
• Double lodge £143 half-board, lexillodges.com

TUI holidays: TUI updates advice for flights, holidays and cruises – what you need to know