Home » Family holidays » The best towns and small cities in the US: Ithaca, New York state

Outside City Hall is Ithaca’s smallest park. It’s the size of a parking space: the mayor’s parking space, to be precise. When the 24-year-old Svante Myrick was elected five years ago, he gave up his car, decorated the spot with benches and plants and welcomed all and sundry to use it as they pleased.

This 60s hippy hangout, four hours’ drive north-west of New York City, has long been a place you can let your freak flag fly. Sitting on the southernmost point of Cayuga Lake – the fingertip of the longest of the Finger Lakes – this town of 30,000 people is hemmed with some of the most beautiful landscape in upstate New York. Glaciation blessed it with hundreds of gorges and waterfalls, while the microclimate of the lakes has created fecund wine country, not to mention a passion for watersports and a town-wide obsession with rowing. 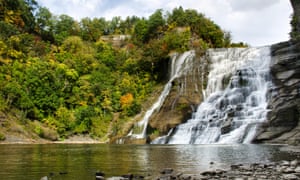 Ithaca Falls, which plunges 45 metres into Cayuga Lake, sits in the heart of town; the trail alongside it leads you up to the campus of Cornell University, the most egalitarian in the famous Ivy League. Its agriculture programmes have fostered innovative, sustainable farming in the region, and one of the best markets in the US (it’s open five days a week in the summer, you can access it by boat, and on the last day of the season it has an “international rutabaga curling championship” that involves rolling swedes at a bullseye). 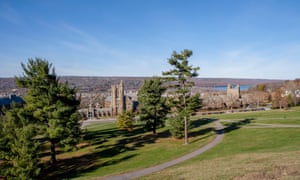 On the other side of town, liberal arts institution Ithaca College, which started life as a music conservatory, is another reason the town has such a creative bent. In the early 20th century, Ithaca was the centre of silent movie production – the Hollywood of the East – and since 1985 it has been home to the pioneering lesbian publishing press Firebrand Books. Locals like to call Ithaca the Little Apple, considering themselves to have all the progressive dynamism of the big city but with a rush hour that barely lasts 15 minutes. The one part of urban culture you won’t find here, however, are hipsters. Ithaca’s not interested in appearances, aesthetics or arty typefaces on chalkboards – its cross-generational, community-focused appeal is a come-as-you-are deal. 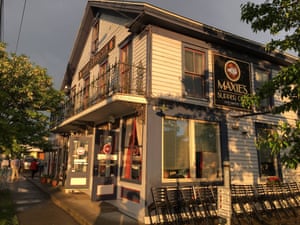 An affordable neighbourhood that isn’t taken over by student digs, the West End is a popular area for twenty- and thirtysomethings, and Maxie’s is the perfect restaurant for it. It serves Deep South-style comfort food (jambalaya from $14) to a soundtrack of live music in velvet-lined rooms so small you’ll soon know everyone you knock elbows with. As well as serving outstanding east coast oysters, this place has a heartening commitment to its community – its fried-chicken fundraisers are legendary – and makes sure it caters to modest budgets. “We don’t want to price anyone out,” says owner Chick Evans, “so you can come in and have a pint and a sandwich or sashimi grade tuna and champagne.”
• 635 W State St, maxies.com

Up on East Hill is Collegetown, a five-block neighourhood separated from the historic buildings of Cornell University by the Cascadilla Creek. This is where Ivy League students roam on their way to and from classes, so it’s a hive of cheap eats: from pizza joints to noodle bars. Collegetown Bagels is, however, their mothership – a breakfast, lunch and general meeting place also described as a “mini-United Nations” because of the number of different languages spoken there. Its smoothies probably make up 50% of a freshman’s vitamin intake. Consider your order before you reach the counter: this is a bustling spot where folk move at New York City speeds.
• Bagels from $2.45, smoothies from $6.25, 415 College Avenue, collegetownbagels.com 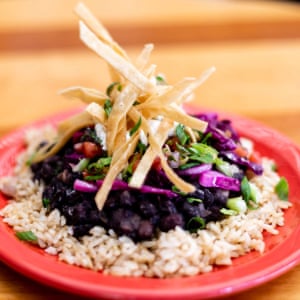 This modest vegetarian cafe, established in Ithaca’s hippy heyday, has been called one of the most influential restaurants in the country. “But then, so was McDonald’s!” says co-owner Sara Robbins, who – like the establishment – keeps her feet firmly on the ground. “There were a lot of communes in the area back in 1973, and I lived on one too. We were all making this hippy food, a lot of brown rice and vegetables. We weren’t really business people, but we were creating something that didn’t exist.” It was their cookbooks – introducing vegetarian world cuisine to America – that made Moosewood a household name. The co-operative never even opened a second branch and still operates in the location where it began – the Dewitt Mall, a former school building now home to an array of antique, secondhand book and craft shops.
• Dinner mains from $17, 215 N Cayuga St, moosewoodcooks.com

The wood-panelled, light-filled room at Coltivare, in the Heights neighbourhood, is the very model of a high-dollar, cellar-door restaurant. Its dishes – from mulled cider-glazed chicken breast ($25) to amaretto and orange chocolate torte ($7) – are accompanied by some of the very best wines the Finger Lakes has to offer. But this place is a front: behind its kitchen doors is a state-of-the-art teaching facility run by Tompkins Cortland Community College, which runs a farm-to-bistro programme training students in every stage of the culinary arts. It was built three years ago to counter the dearth of workers in the food industry (despite Ithaca having more restaurants per capita than New York City). The menu champions locally sourced ingredients, the wine list bursts with the region’s trademark Rieslings – and it’s all very good value.
• 235 S Cayuga St, coltivareithaca.com 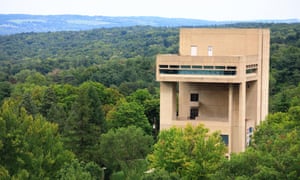 The central campus at Cornell University is a rich mix of buildings dating from 1865 all the way to the 21st century. But amid the Victorian gothic, no structure is quite as eye-catching as the Johnson Museum of Art, an abstract concrete tower that looks like someone forgot to fill in the floors. It was built in the 1970s for the university’s vast repository of art and the highlights are displayed on three gallery floors alongside regular temporary exhibitions. It’s free to enter; be sure to make it up to the fifth floor, where the exquisite Asian collection is supplemented by a 360-degree panaroma of the town.
• Free admission, Tuesday-Sunday 10am-5pm, 114 Central Ave, museum.cornell.edu

At 220 miles from midtown Manhattan, Ithaca’s downtown playhouse is a little more than off-off-Broadway. But the ambition of this intimate venue (just 99 seats) is serious enough. The theatre company’s credo – “important conversations happen in the Kitchen” – has informed its programming of topical, thought-provoking work since it was formed in 1991. “They moved from the Clinton House, the town’s most historic building, to this purpose-built, modern space in 2010,” says Diana Riesman, a local screenwriter and radio producer, “and they do really great work. Ithaca College has a really strong theatre department and has provided many of the actors.”
• 417 W State St, kitchentheatre.org 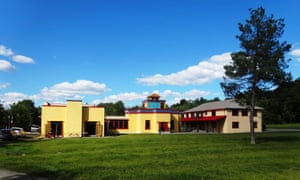 “There’s always been a certain mysticism alive in Ithaca,” says Kash Iraggi-Wiggins, a herbalist who makes body care products and runs spa resort La Tourelle. “We’ve got a bumper sticker that says ‘Ithaca: 10 square miles surrounded by reality’. Ithacans want to know ways to take care of themselves, in a spiritual sense as well as a physical one.” As well as a historical centre for theosophy, spiritualism and alternative medicine, the town is home to a Buddhist monastery and the Dalai Lama’s unofficial home in North America. The monks welcome visitors to join them for scheduled meditations and run summer retreats.
• 201 Tibet Drive, Danby Road, namgyal.org 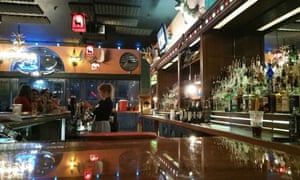 The Commons, Ithaca’s pedestrianised centre, is the focus of nights out, and music spills onto the street from its bars and clubs every night of the week, including Sunday. The Range is a country bar without the stereotypes –what other country music venue hosts a regular drag night? On quieter evenings there’s a pool table, and games of cornhole; midweek there are swing and salsa classes; and by the weekend it’s packed with Ithacans ready to boogie. If you’d rather stand back and listen, its location overlooking the Commons makes it a great place to watch the world go by with a $2 beer.
• 119 E State St, therangeithaca.com 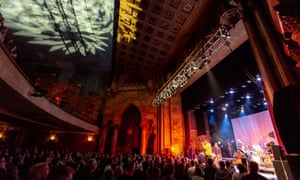 On stage with guitarist Dave Rawlings at the State Theatre in 2017, singer-songwriter Gillian Welch talked of the first gig she played here. “It was 20 years ago, and there were pieces of the ceiling floating down like snowfall,” she recalled. Once a 1920s cinema, large-scale investment has transformed it into a 1,600-seater performing arts venue, as well as rescuing its medieval-themed interior and starry ceiling. “We’ve done everything from Avett Brothers and the National to Lyle Lovett and hip-hop shows here,” says Dan Smalls, Ithaca’s largest promoter. “The only thing that doesn’t work in this town are cover bands and tribute acts – people truly care about musicianship here. They’re smart people, and they want sincerity.”
• 107 W State St, stateofithaca.org 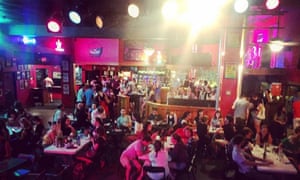 An unexpected feature of Ithaca is its reggae. “Since I was a kid there’s always been a strong scene here,” says Elliot Martin, lead singer with the nationally acclaimed band John Brown’s Body. “The Haunt’s owner had been a big reggae fan since the 70s. He turned us on to it, and he would bring in all these Jamaican acts to this out of the way place.” The club has since moved location, but there’s still regular reggae – as well as weekly jazz jams, a Bluesday Tuesday, and a Grateful Dead night.
• 702 Willow Ave, thehaunt.com 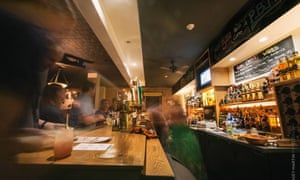 If you’re looking for an unpretentious bar, relaxed atmosphere and really good selection on tap, the Westy is for you. It’s a friendly place with a mixed clientele – intergenerational mingling is very much a part of the town’s vibe, which is refreshing. The bar serves a huge selection of Ithaca’s famed craft brews, including the iconic east coast Flower Power IPA, as well as the stars of its burgeoning cider industry. This being Ithaca, a place where graduates are less worried about climbing the greasy pole than bringing joy to their community, several of the bartenders will have more degrees than you.
• 516 W State St, thewestyisabar.com

Ashley Cake and her partner Dave Thomas had been bartenders in Ithaca for a long time when they came up with the idea of The Watershed, a late night destination that wasn’t all about the alcohol. “We saw that people wanted a place to come and just talk to each other, not necessarily be surrounded by DJs and dancing and heavy drinking.” The result is a bar that fosters a conversational atmosphere, serving a wide selection of teas alongside its liquor. Ashley has created a drinks list that produces zero waste, and there’s even a free library. Even more interesting to read are the notes that the clientele write and leave tucked into the exposed brickwork of the walls.
• 121 W State St, Ithaca, thewatershedithaca.com 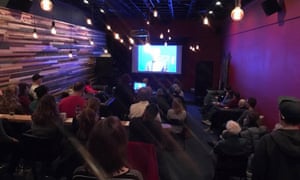 Not officially a bar as much as an “event space”, this room is possibly the coolest, most underground joint in all of Ithaca. There’s not a single adornment on the wall, but there are comfy leather sofas, moscow mules served in copper mugs, and Star Wars models hidden among the light fittings; it shares the building, once an arthouse cinema, with a yoga studio and a florist (you’ll have to wend your way through the orchids to reach the bathroom). The nightlife consists of everything from dance parties to movie nights to spoken word, but its “Galactic Mondays” are the weirdest and most fun, when a “synthetic music collective” – AKA a group of synthesiser geeks (Roger Moog, inventor of the eponymous synth, studied for a PhD at Cornell) – play to a packed house.
• 1201 N Tioga St, casitapolaris.com

• The trip was provided by Visit Ithaca with accommodation at the Argos Inn (doubles from $170 B&B). More information at VisittheUSA.com

The best things to do in Athens