The great British holiday getaway is usually the most anticipated weekend of the year, a culmination of months of fretting and planning. But this is the year of the last-minute summer.

Huge numbers of people have delayed making bookings thanks to a messy cocktail of weather, politics and a plunging pound. Travel agents, tour operators, hotels and B&Bs all say they have been battling Brexit uncertainty to get people to make bookings for months.

Yet in the last few weeks, the yen for travel appears to have returned. More than 8,800 planes took off on Friday – the final tally will probably break records, according to the National Air Traffic Control Service – with two million travellers due to fly out of the UK over the weekend, said travel agents’ association Abta.

Those staying in the UK are also heading off, making 13.4m car journeys throughout the weekend – 4m more than this time last year – although there were the usual problems: a crash on the M5 led to 70 miles of tailbacks in Devon and Somerset.

David Hope of GfK, a market research firm which monitors package holiday sales, said travel companies had been discounting fiercely to overcome political problems. “It’s been massively impacted by Brexit,” he said, pinpointing the moment when people were put off booking holidays as 16 December 2018 – the date when a cabinet discussion about post-Brexit travel arrangements was leaked to a newspaper.

“It was saying basically ‘after Brexit don’t travel’. Before that, at the end of November, bookings were 10% up. After the leak, bookings immediately dropped by 18% and they have struggled ever since, until the government changed the Brexit date to 31 October. It could be coincidental, but it mirrors exactly when the leak happened. We’re now seeing bookings 1% ahead of summer 2018.”

The good news for travel companies may not last if planned strikes at several airports go ahead. Easyjet baggage handlers at Stansted and about 4,000 staff at Heathrow are due to walk out for two days if the pay disputes between employers and the Unite trade union are not resolved, with further two-day strikes planned. Talks continue at conciliation service Acas. Workers at Gatwick and British Airways pilots are also holding strike ballots.

The fall in the value of the pound is also prompting more people to search for all-inclusive holidays, according to Travel Supermarket’s Emma Coulthurst. “The storm of Brexit and its impact on currency exchange rates has seen many delay booking and prices come down as a result of the drop in demand,” she said. “There are many family holidays available from as little as £300 per person or less for a family of four this summer school holiday. That’s unheard of.”

Spain – particularly Tenerife and Mallorca – remain the most popular places to go, but Coulthurst reported a surge in interest in Turkey, especially the southern coastline near Antalya. 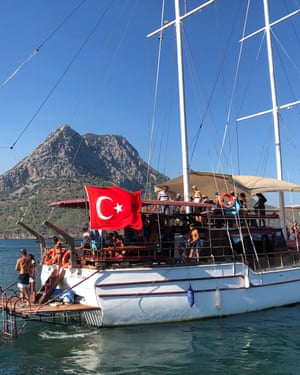 The biggest gainer is Tunisia, whose tourism industry collapsed after the terror attacks in 2015. UK nationals made 155,000 trips to Tunisia in 2018, according to the Office for National Statistics, but this year should see levels similar to 2015’s 411,000 visitors.

Sardinia, the Costa Dorada near Barcelona, and Bulgaria are also all up, Coulthurst said, at the expense of Orlando, Dubrovnik and Dubai.A According to Brett Gerrett of Sunvil, an independent travel agent in southwest London. “I haven’t seen fares in this position in the last six years. They started low, went high, and came back down again. It’s been a very strange year.”Gerrett was at Heathrow early on Friday in an effort to beat the crowds. “We’re on the tarmac at the moment. I’m on a BA flight going to Madrid and I’ve paid £119 for a club seat – and it’s the second day of the summer holidays. We’ve had people coming in, not complaining exactly, but making a point to us that they paid high prices in advance and now it’s lower. Nobody ever does that.”Travellers with more money to spend were also leaving things late. Pete Brudenell, of luxury villa firm, CV Villas, said June bookings were up by more than half, particularly for Portugal and Turkey.

Staycationers in the UK banking on a reprisal of last year’s long hot summer will be pleased to see temperatures hit 30C in parts of England this week.But owners of B&Bs and self-catering accommodation have also been hit by the last-minute summer.

“We’re getting shorter stays and later bookings,” said Ali Kayley, who runs a glamping and holiday cottage business at Westley Farm in the Cotswolds. “People are booking in the same week, and that wasn’t happening a year ago.”

She said there had been a marked decline in the number of European visitors: “We get lots of German and Dutch families and our numbers are considerably down this year.” Some European guests were put off by fears they would need a visa to get into the UK: “One of our regular guests from Holland was due to come in April, and he wanted a guarantee that he would get his money back.”

Joss Croft, the chief executive of trade body UKinbound, said hotels and operators serving American and Chinese visitors were doing well. “But 15% of my members are seeing a decrease in Germany and France, and Europeans make up 60% of our inbound visitors,” he said. “But a bigger concern is where on earth they’re going to get the staff from – a lot of EU people have left, French speakers, Spanish speakers. People that were previously getting 25 applicants for each job are now not getting any.”

Travel warning: Italy goes into lockdown as coronavirus rages – is it safe to visit?

2019 Outlook: Aviation market to expand at a slower rate this year