‘It’s a new Machu Picchu!” I cried to my companion as we crested a high pass and gazed down. In a secret mountain fastness lay the remains of an ancient village. A grid of streets passed silent dwellings. Further below, two Nazca-straight lines led past a decaying temple. We were 21st-century Hiram Binghams. I could already hear Kirsty Young asking me what my first disc would be.

I was a little wide of the mark. We had climbed around 770-metre Moelwyn Mawr mountain from the tiny village of Croesor, and what we’d stumbled across were, in fact, the mouldering ruins of Rhosydd slate mine. The dwellings were terraces of workers’ cottages. The Nazca-like lines were a half-buried tramway that rolled past a crumbling Methodist chapel rather than a temple dedicated to Apu-punchau.

All were now deserted, and so far off the tourist trail that even on a sunny midsummer afternoon we had the place to ourselves. That may not be the case for much longer: it was announced last week that the “slate landscape of north-west Wales” will be the UK’s 2019 nomination for Unesco world heritage status, news that made my exclamation pleasingly prophetic.

Our “discovery” of Rhosydd came on our third day on the Snowdonia Slate Trail, an 83-mile (mostly) waymarked footpath that opened last November. Part-funded by the Heritage Lottery Fund, it takes walkers back in time, to when this region formed the rattling, thumping hub of the Welsh slate industry. It takes in many less-frequented corners of the national park and all its major mountain ranges. I thought I knew Snowdonia but the trail sent us to places I had no idea existed. 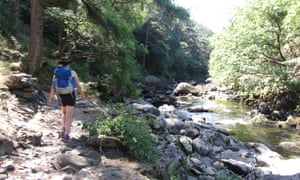 Nearly every memory I have of the region involves me getting drenched. So it was with suspicion that I eyed the cloudless sky as the train rolled along the north Wales coast into Bangor, at whose Port Penrhyn the walk starts. It was here that horse-drawn slate wagons disgorged their cargoes into sailing ships for export around the globe. The opening mile-and-a-half along the old track bed were to prove the flattest of the whole walk.

From nearby Bethesda, the trail forms a big loop, occasionally passing through better-known towns – Llanberis, Beddgelert, Betws-y-Coed – but mostly keeping to slender footpaths or stony mountain tracks that appear little-trodden since the miners and quarrymen packed up their pickaxes and went in search of other employ. We were guided by Aled Owen’s Snowdonia Slate Trail guidebook. This was excellent on detail – who knew the Romans were roofing their forts with local slate back in the first century? – if sometimes somewhat casual in its approach to directions. 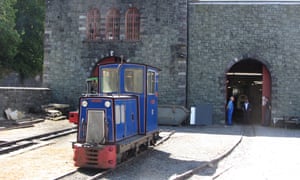 Our second day began with a trip on one of a handful of restored former slate railway lines. The Llanberis Lake Railway once hauled slate to the coast at Port Dinorwig. We squeezed ourselves into its narrow wooden carriages and its tiny locomotive rattled and clanged us along the rocky shore of Llyn Padarn and back. Jumping out at Gilfach Ddu station, we strolled into the National Slate Museum to watch a refreshingly unromantic film about the local Dinorwig quarry. It once claimed to be the world’s largest manmade hole, and too many of those who worked it ended up coughing themselves to an early death in the local hospital, victims of silicosis.

Quite what the miners would have made of the satisfyingly hairy zip-wire course at the Llechwedd Slate Caverns one can only imagine, but we had great fun flying around vast, colourfully lit caves, using the via ferrata along connecting tunnels and (in my case) failing spectacularly to monkey-bar across a heart-poundingly deep abyss (my harness duly saved me from an untimely splattering). 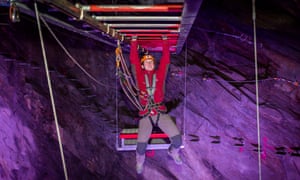 Our experience of a second erstwhile slate railway was also doubtless a stark improvement on days of yore. On the third day, we joined the Ffestiniog Railway at Tanygrisiau for a sylvan, serpentine descent to the coast at Porthmadog and then back up to Blaenau Ffestiniog, quaffing rather too much of the very moreish Welsh cider served on board. We had also planned another slate-related foot-saving venture: taking the Welsh Highland Railway alongside the old Roman road from little Waunfawr to the even smaller Rhyd-Ddu. Unfortunately, I managed to transpose the train times in my head, so we rocked up at the station nearly an hour after the last train had passed through. I was still apologising to my companion as we waited for a hastily arranged taxi, when some flashy golden-ringed dragonflies zipped effortlessly by.

It’s fair to say that accommodation isn’t copious in the regions the Snowdonia Slate Trail seeks out but it passes through enough little towns and villages with places to stay. We slept in hostels in Llanberis and Penmachno; in rather more luxury at the newly refurbished Saracens Head in Beddgelert; and fell in love with the cracking Hostel Cellb in Blaenau Ffestiniog. This is an Edwardian police station that now hosts a cinema and shabby-chic bar, and whose former cells have been very smartly fitted out. 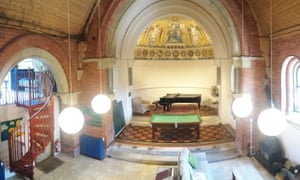 For our final night we rejoiced in a whole chapel. The last time I was at St Curig’s in Capel Curig I was a teenager sheltering from a downpour of diluvial proportions. The church has since been converted into a wonderfully indulgent mega-holiday let (and sometime B&B in quiet periods), with a grand piano in the apse. We discovered that a hot tub, a bottle of cava and views of mountains wherever we looked is not an undesirable way to wipe the day’s slate clean.

• The trip was provided by Snowdonia Attractions. Virgin Trains has returns from London to Bangor from £46. Dol Peris guesthouse in Llanberis has single rooms with shared facilities from £35 room-only. The Saracens Head has doubles from £98 B&B. Hostel Cellb in Blaenau Ffestiniog has dorm beds from £20. The Eagles Bunkhouse in Penmachno has dorm beds from £18. St Curig’s Church in Capel Curig sleeps 16 from £650 a night