On 20 September each year, Rio Grande do Sul, the most southerly state in Brazil bordering Uruguay and Argentina, celebrates the Farroupilha (Ragamuffin) Revolution, a civil uprising that began in 1835 when the state fought for independence from the rest of the nation. Despite the support of Italian revolutionary Giuseppe Garibaldi, the gaucho-led revolt ended in 1845 with surrender, and Rio Grande do Sul remaining part of Brazil.

Despite the defeat, the conflict is a source of regional pride, with partying across the whole of the state, although it’s in the capital Porto Alegre where the action really happens. For most of September, thousands of people camp out in the city’s Harmonia Park, recreating traditional gaucho lifestyles at the Farroupilha Camp. 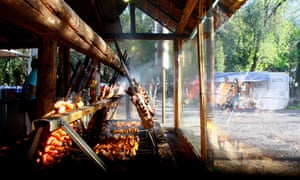 A programme of free events (from 7-20 September this year) includes musical performances, horse riding displays and folk dances, with people dressed in historic gaucho fare – lace-trimmed dresses for the women and wide bombacha trousers and red kerchiefs for the men. Expect plenty of barbecued meat, naturally – and a big carnival-like closing parade.

Luiz Bruno’s double A-side single Yeah!/ Words are not Reality is out now

Hotel quarantine UK rules: What are the rules for the quarantine hotel policy?