Home » Family holidays » Kuching, Malaysia: what to see plus the best restaurants, hotels and bars

Just as Penang was swiftly transformed into one of Asia’s hottest destinations a few years ago, the buzz in Malaysia right now is all about another under-the-radar spot, the little-known city of Kuching, riverside capital of Sarawak on the island of Borneo. There are several theories as to how the city got its name (Kuching is “cat” in Malay), but its roots are as a trading post, built up by the family of Sir James Brooke, the first of the “white rajahs” who ruled Sarawak for a century. When I first visited 20 years ago, Kuching was a backwater, where tourists would hardly break their journey on their way to trek in Borneo’s rainforests and national parks.

Going there today still reminds me of a time when Asian cities were not clogged with traffic, pollution and skyscrapers. Kuching’s architectural heritage and historic Chinatown are well-preserved, even though it lacks Unesco protection, and there is scarcely a high-rise to spoil the skyline.

The street food has always been spectacular here, but now there are also bistros and fun bars, and a great choice of accommodation from boutique hotels to backpacker hostels. Despite its growth it retains a laid-back, small-town ambiance, with friendly locals who love to meet travellers who have made it all the way to Borneo. 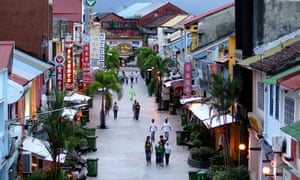 Kuching is defined by its historic waterfront, and the perfect introduction is to take a sunset stroll along the one-mile pedestrian promenade that follows the snaking Sarawak river. Across the water lie sleepy Malay kampongs, the once-imposing colonial Fort Margherita and the White Rajah’s palace, both dwarfed today by an immense modern parliament building resembling a surreal golden spaceship. There are river cruises, but the simple sampan ferry, which rows people back and forth for M$1 a ride (under 20p), is more fun. 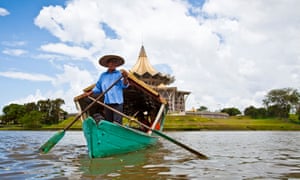 At the end of the prom, opposite the ancient prison that is now a fashionable restaurant, is the jewel in Kuching’s colonial crown, the 19th-century Old Court House with colonnaded terraces, which has become a culture hub since it was taken over by the people behind Penang’s bohemian China House arts and leisure centre. Today the various court buildings host exhibitions, theatre, poetry reading and live music, as well as a fashion boutique, cafe and restaurant. Parallel to the waterfront runs Main Bazaar Street, lined with shops selling tribal handicrafts. The back streets behind form Kuching’s Chinatown, a maze of incense-filled temples, coffee shops, street food stalls and noisy workshops full of tinsmiths, cobblers, carpenters and tailors. 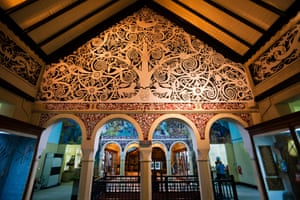 Kuching is not big on sights, but one venue not to miss is Sarawak Museum, which has barely changed since it first opened in 1891, with an incredible collection of local flora and fauna, and a genuine insight into the indigenous tribes of the Borneo rainforest. 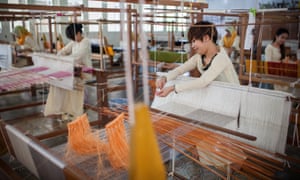 No one could fail to notice the large number of tattooed people in Kuching: body art is an integral part of the indigenous culture, especially the Iban, once also known for headhunting. Today, more than 20 tattoo studios draw in travellers. The man to visit is the world-renowned Ernesto Kalum, whose Borneo Headhunter studio (47 Wayang Street) offers both contemporary tattoos using modern machines and tribal designs created with the traditional tap technique.

For a less invasive insight into local life, book a course at Bumbu Cooking Class (about £28pp), where Joseph Jissin, from the Bidayuh tribe, takes small groups to the market to shop for ingredients from the jungle such as ferns and pineapples, colourful Malinjau nuts and fragrant pandan leaves, which everyone then cooks under his supervision before eating everything for lunch. 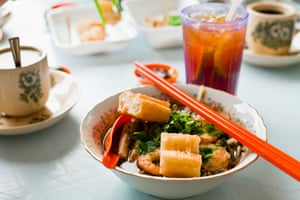 Kuching is a foodie paradise, particularly the street food, where most dishes cost less than a pound. Begin at Chinatown’s Seng Kee (main dishes about 90p, 37 Carpenter Street), where there’s a choice of fishball soup, pork satay, Sarawak laksa, Chinese rice porridge with salted egg and preserved vegetables, or the adventurous kueh chap, a feast of slow-braised pork ribs and intestines.

In nearby Padungan Road, there’s always a queue for Noodle Descendents (188 Padungan Road) which serves an awesome bowl of kolo mee, the favourite local dish of minced pork and noodles, served by a tiny lady who has been cooking here since 1957. 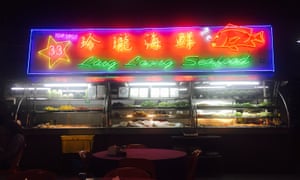 There are plenty of fine dining addresses too, from Asian fusion cuisine at Bla Bla Bla (27 Tabuan Street, mains £7) to excellent pasta and pizza at Junk (mains from £4, 80 Wayang Street), decorated with eclectic antiques collected by flamboyant chef George Ling. He also owns a row of Chinese shophouses, the latest being the lovingly preserved Barber Cafe just up the road, serving comfort food: tangy prawn soup, chilli burgers and healthy salads accompanied by a bloody mary or dirty martini. 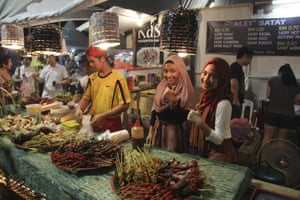 But what is really exciting in Kuching right now is the rediscovery of the cuisine of Sarawak’s indigenous tribes in creative restaurants such as Lepau (395 Ban Hock Road) and the.Dyak (29 Simpang Tiga Road). Dishes include manok lulun (chicken stewed in bamboo with tapioca leaves and herbs); umai (thinly sliced river fish marinated ceviche-style); and vegetables such as cangkuk manis (star gooseberry leaves) and midin (wild ferns). 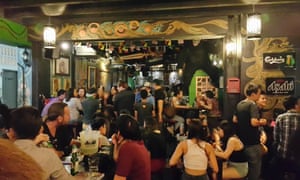 For the best river views, take afternoon tea or sunset cocktails at the James Brooke Bistro (7 Tunku Abdul Rahman Street), which recalls the days of the white rajahs. Locals, though, tend to prefer freshly roasted coffee from beans grown on Sarawak plantations, at Black Bean Coffee (87 Ewe Hai Street). From early evening happy hour until well after midnight, the Drunk Monkey (68 Carpenter Street), in Chinatown, is Kuching’s latest hot spot, though easily confused with the equally popular Monkeebar (12 Song Thian Cheok Street), owned by a conservation NGO that gives a third of its profits to an orang-utan conservation project. For live reggae and heavy metal, head for The Canteen (7 Tun Haji Openg Street) at weekends. And 21 Bistro (64 Padungan Road) is a gritty bar where Filipino musicians entertain a raucous crowd: it’s the place to try a glass of tuak, lethal home-brewed rice wine. 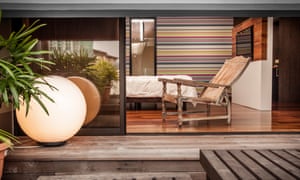 Kuching has plenty of modern five-star hotels, but a much more original place to stay is the Ranee (doubles from £53 B&B), a romantic boutique hotel in two former Chinese shophouses, decorated with antiques and tribal handicrafts. Just next door is a charming budget alternative, the Waterfront Lodge (doubles £21) with a traditional interior courtyard. There are a host of inexpensive backpacker hostels, such as Singgahsana Lodge (dorm bed £6.50, singgahsana.com), which has a rooftop bar with pool tables and occasional live music, or in Chinatown, the hip DIY Dorm (dorm bed £4.60) with its popular Wrong Place cafe.

Trips out of town 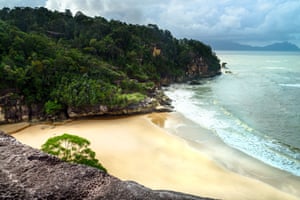 There are several destinations an hour or so from Kuching that offer an exciting taste of Borneo’s ancient rainforests (see sarawaktourism.com for contacts). Bako national park, the oldest and one of the smallest national parks, is reached by a steamy boat ride along the Santubong river (full day £55pp). Jungle trails weave past mangrove swamps and dense tropical vegetation, with several coming out at quiet sandy beaches on the South China Sea. For staying overnight, there are simple two-person jungle chalets to rent (about £30) or dorm beds (under £4), with the chance to go on after-dark treks. 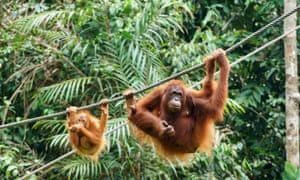 A trip to the Semenggoh Wildlife Centre (£24) offers a rare opportunity to see orangutans in their natural habitat. Travellers need to understand though, that this is a rehabilitation centre for a species whose future is still seriously threatened, not a tourist attraction. Semenggoh’s 26 orang-utans roam free in the jungle and swing through the trees when forest wardens arrive for the twice-daily feeding. Visitors can respectfully watch in silence from a platform around 100 metres away. 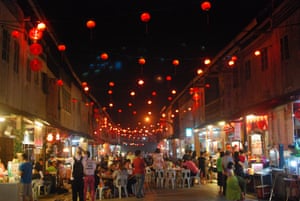 Rarely mentioned in guidebooks is Siniawan Old Town whose night market – held in an abandoned 1860s gold mining settlement – makes an offbeat foodie escapade just 30km from Kuching (about £15pp). On Friday, Saturday and Sunday, from sunset till 11pm, this riverside ghost town of clapboard houses comes alive as scores of food stalls set up shop, frying noodles and vegetables, grilling fish, chicken wings and satay. Tables are set up all along the high street, under red Chinese lanterns, to cater for hundreds of hungry visitors.

British Airways buckles up for Christmas ·