Come December, well after the end of the tourist season for the Greek islands, the atmosphere in Hydra changes. From cosmopolitan and festive during the summer, the mood turns contemplative as winter arrives and the blue skies become a rare occurrence. Last month, another event marked the turning of the season: Leonard Cohen’s death.

Hydra was the musician and poet’s spiritual and physical home in his 20s, and many places here are still tied to his presence – a source of pride for the local inhabitants, who are gearing up to honour him throughout next year.

The tiny island in the Argosaronikos has been defined by the great singer-songwriter’s time here.

By the port, Rolo Cafe, once known as the kafenion O Katsikas, is where Cohen and a generation of artists and bohemians hung out. It is also where his first concert took place – just Cohen with his guitar and only a few friends in the audience, round the back of the shop. 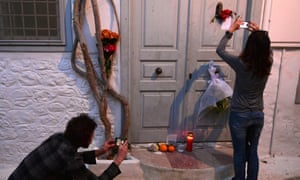 A few days after his death, the front door of the traditional old house that he bought in 1960 for $1,500 is decorated with tributes, from fruit and flowers to poems and personal notes. Maria Kontopithari, who is now in her 60s, still owns the corner store near his house and remembers him as “a very private man and a perfect gentleman”.

A 10-minute walk from the sea, up several flights of steps and through winding alleys, the three-storey whitewashed home is now used by his children. Cohen hadn’t visited for 15-odd years but his son, Adam Cohen, recently recorded his own album here. It’s empty at the moment, while a young couple who came to pay their respects are sitting on a low wall next to it, reading his poetry aloud.

Greece is a good place
to look at the moon, isn’t it?
You can read by moonlight
You can read on the terrace
You can see a face
As you saw it when you were young

Cohen wrote the poem Days of Kindness about his girlfriend and muse Marianne Ihlen, and their years spent here. A few streets up you can spot the terrace that he describes, and the scenery familiar to those who hang around after all the tourists have gone – the deep blue sky and sea with fog rising from it.

“A lot of the locals have left over the years,” Maria tells me, “and Cohen’s old friends have left, too, or don’t come any more. The island has changed a lot since his days.” 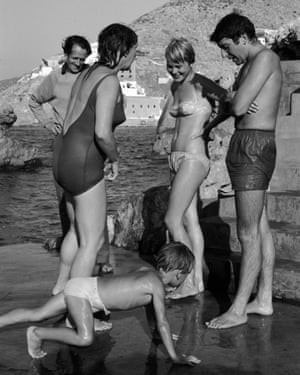 James Browning, a Briton born in Cyprus, came to Hydra in the 1960s and is one of the last people who knew Cohen well and saw the island in those days. “There used to be some very fun, interesting people here, back in those days,” he remembers. “We mixed with artists and lots of foreigners. The house on the hill there”, he says pointing at a grey stone house near the port, “was owned by an American interior designer. Whenever he threw a party, the whole island was invited. After those people left, there were no more parties.”

From the 1980s onwards, the atmosphere changed as Hydra turned from a bohemian paradise into a more exclusive resort. By that time it wasn’t a place where a young writer or musician would turn up to finish a book or write songs.

Instead Hydra developed a glamorous reputation and in peak season it can still feel as glitzy as Capri. “It is changing again now,” says Browning, alluding to a new generation of artists and writers who are beginning to discover the pleasures of Hydra beyond the tourist season, when it is emptier and more relaxed. 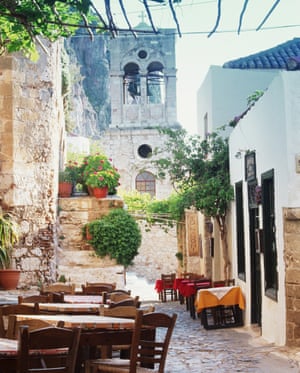 Head to the port – there are no street names on the island – and you’ll find Roloi, Cohen’s old favourite, under the clock tower in the harbour, which is a great place to stop for an ouzo. The Pirate Bar, also in the port, used to be called O Peiratis and was another haunt of Cohen’s and his friends, and it’s still very popular – chic but not too exclusive. For cocktails, while you’re watching the sunset, the bars along the cliff are the place to go for sea views, which are always more dramatic out of season.

The colder weather feels more atmospheric and romantic, and it is easier to imagine how it used to be when Cohen bought his home here, a few days past his 26th birthday. The older bohemians may have all but disappeared yet the island is still delightfully out of time, isolated from the rest of the world. It is car free and mules do a lot of the carrying.

Cohen’s description of life here, now a famous quote in Greece, still feels relevant: “There is nowhere in the world where you can live like you can in Hydra, and that includes Hydra.”

The bars are still laidback and a drink out with the locals usually turns into long conversations about art and politics. Thankfully, not so much has changed after all.

British Airways has flights from London to Athens from £121. Ferries from Piraeus in Athens to Hydra cost £23 each way. Glaros Guesthouse has rooms from £30 a night

Aurora Anguilla, the former CuisinArt, preps for a November debut

Air Canada celebrates the arrival of its first Airbus A220 ·