Home » Family holidays » Hong Kong’s best views: from the Peak to the penthouse

More than anything, Hong Kong is a city of sights. Towers of metal and glass jut out of dense tropical wilderness, and the harbour on which the city was founded is an ever-present reminder of the city’s maritime roots. Here’s where to find the best views Hong Kong has to offer: just make sure to check the weather, as the occasional smog can obscure the sights.

The classic: Victoria Peak
Victoria Peak is the city’s prime vantage point, the perfect spot to survey the densely vertical concrete forest that is Hong Kong. The Peak is the one-time home to the city’s colonial overlords – these days, wealth is the only criterion for access. It’s here that the majesty of Hong Kong is on display, and you get a real sense of how the city has come to be: skyscrapers and apartment blocks bolted on to the side of the mountain, with Victoria harbour in the distance. It is ever-narrowing as land reclamation takes bites out of the sea, but the never-quiet harbour is testament to the shipping on which Hong Kong was built. The Peak Tram funicular (HK$37/£3.60) is the most storied way to get up, but there can be queues. If you’re pressed for time, just jump in a cab up and catch the tram down: the wait is always shorter on the way back. Or if you’re feeling particularly leisurely, it’s a gentle stroll back to sea level. 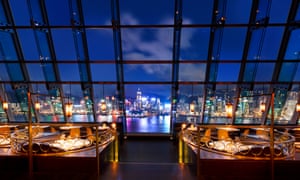 One of the city’s longest-standing bars with a view continues to thrive for a reason. Aqua’s double-height windows offer up a gobsmacking panorama of the Hong Kong skyline the second you walk in. The restaurant’s on the 29th floor and the bar’s set back a little on the 30th, hence the flawless views. In the restaurant, there’s the option of an Italian or a Japanese menu, which would shake the confidence if the food weren’t so good. The bar takes similarly mixed inspiration, with comingling Italian and Japanese flavours. If you’d like to see the harbour from a little closer to sea level, the restaurant group’s Aqua Luna junks offer nightly evening cruises up and down the harbour for HK$220 (£22) – a pretty good deal given that a drink is included.

Worth the hike: Lion Rock 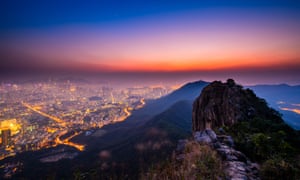 In profile, this hill is said to look like a lion, standing guard over Hong Kong. It’s the namesake of what’s been dubbed the Lion Rock spirit: a gritty, can-do attitude said to grant each Hongkonger the ability to forge wealth and success in the face of adversity. Times are tougher in Hong Kong these days, but the Lion Rock still watches over the city, doling out his spirit to those in need. The lion sits on a mountain ridge separating the Kowloon peninsula of Hong Kong from the New Territories to the north. That means the clearly signposted, occasionally steep path up the ridge rewards hikers with expansive views of the peninsula unfolding before you, sloping down to the sea and Hong Kong island on the other side. The trail is about a three-hour round trip: catch a cab from Wong Tai Sin MTR station to the start of the trailhead. 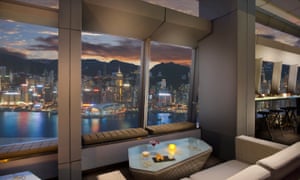 The bar at the Ritz-Carlton hotel sits on the 118th floor of the International Commerce Centre, making it one of the highest bars in the world. The views are therefore unsurprisingly spectacular, although dependent on the vicissitudes of the weather. On a fine day, the hotel’s location in West Kowloon gives it a prime vantage of the ferry piers on either side of the harbour, from which boats continually churn out of their berths towards the city’s many outlying islands – and to China proper beyond. If the neon lighting and beats of Ozone aren’t quite your thing, then descend to the lowly reaches of the 102nd floor, where the hotel’s Lounge Bar serves up classic cocktails and a lofty afternoon tea. 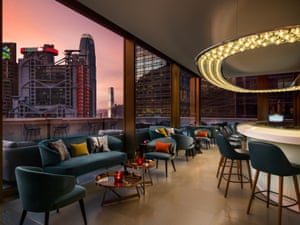 The brand-new Murray Hotel took a former government office building in the middle of town and turned it into the city’s hottest opening. The hotel’s rooftop restaurant and bar sits inside a giant glass box, and wrapped around it is a vast 420-square-metre outdoor terrace. Views take in the greenery of Hong Kong Park and its aviary on one side, while on the other lie the skyscrapers of the city’s financial centre. And behind, the affluent Mid-Levels residential district sits halfway up the mountain, a thousand windows lit up with a thousand distant lives.

The heart of it all: Alto 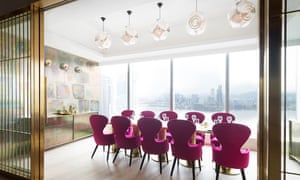 The Tom Dixon-designed interiors on the 31st floor of this restaurant are appropriately shiny and suffused with industrial glam, but it’s the city outside the windows that really impresses. Especially the views from the open-air rooftop bar: instead of sitting right on the waterfront, Alto is a little set back into the city, and so it rises up through the middle of Hong Kong’s urban chaos, with the harbour looming ever-present in the background. Bar seats line the edge of the rooftop, for those attached to the feeling of drinking while staring into the abyss. A glance over the edge brings the city’s smaller buildings rushing up to meet you, a forest of glass and neon glow.

Why Newfoundland is THE hot destination for 2019!

Sydney Airport calls on community to ‘Bid for Good’ ·