It takes a few seconds for the statue of Crazy Horse to come into focus, which is surprising given that it’s being carved out of a 641ft-high stone outcrop. From a distance it looks like just another rocky peak silhouetted against the cloudless South Dakota sky. But get closer and its form and detail become apparent: an unyielding face, a raised arm, a pointing finger, all recreated on a colossal scale.

The lack of instant clarity is understandable given that, 70 years after Polish-American sculptor Korczak Ziolkowski began work on it, this edifice-in-waiting is still more mountain than statue. “My father knew when he started that this would take decades,” says Jadwiga Ziolkowski, Korczak’s daughter and current CEO of the Crazy Horse Memorial Foundation, as we sit in the nearby visitors’ centre. “He knew he would not see it finished.” Later that evening, several hundred people watched it edge incrementally closer to completion at a dramatic public night blast.

Depending on which local you talk to, the Crazy Horse Memorial statue is either an epic feat of human ambition or an equally grand folly. The statue was the brainchild of a local civil leader, Henry Standing Bear, who in 1939 commissioned Ziolkowski to create something as impactful and significant as Mount Rushmore. The visitor centre tells the fascinating story of his superhuman efforts to turn a huge granite outcrop, originally known as Thunderhead Mountain, into a huge statue of one of the great figures of American folklore. 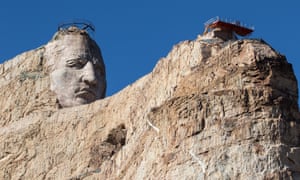 The flesh-and-blood Crazy Horse was a Lakota tribe insurgent who repeatedly fought the US army before his death in custody at the age of 37. There’s some irony in the idea of a man who today would be branded a terrorist being commemorated in such grand fashion. The sense of myth-making is only enhanced by the fact that Crazy Horse never let anyone take his photograph – this memorial is poetic licence carved in rock.

In the bright sunlight, the statue is spectacular enough, but the setting sun lends an otherworldly aspect to its contours. Night blasts are rare: there are just two each year, taking place in late June and early September, and as the crowds thronged the viewing platform and raised car park a mile away from the statue, there was palpable anticipation in the air. The programme started at 10pm under a star-speckled sky. A laser show projected images both historical and abstract on to the side of the mountain, while stirring music ramped up the atmosphere. There was a moment’s pause, then the explosions began. At first, you just saw the flashes of light igniting in sequence along the statue’s arm. Then, a few seconds later, the sound of explosions reached across the valley, followed by the tang of dust and detonating powder. The explosions danced across the mountain, a vividly illuminated battle of two elements. At first, each explosion was greeted with a whoop, but these were then drowned out by the distant booms. It lasted just a few minutes, and when it was finished the statue was barely visible for dust. 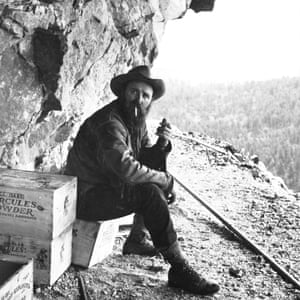 Driving past the mountain the next day, the dust had cleared. To the naked eye, Crazy Horse looked unchanged. When the statue is finished, decades from now, it will look breathtaking: an enormous figure on horseback, pointing out over ancestral lands. Until then, it stands as a monument to human determination, both of the man who inspired it and the people turning it into reality.

Despite its physical magnitude, the Crazy Horse Memorial isn’t South Dakota’s main draw. That’s Mount Rushmore, 18 miles east, which attracts a large chunk of the 14 million visitors who come to this sparsely populated state deep in flyover country each year. But where Rushmore, with its 60ft-high sculpture of four US presidents, is a celebration of American triumphalism, the Crazy Horse monument is more a reflection on the turbulent and bloody history of both state and nation, and the injustices inflicted on its indigenous people.

The jumping-off point for any visit to the area is Rapid City, a compact town on the edge of the rugged Black Hills. It has an easy charm that comes with a side of hipster cool. The latter is embodied by Black Hills Vinyl, a cluttered new-and-used record shop which, like many such emporiums, seems to exist in its own pocket dimension, and Kōl, a casually stylish downtown restaurant that transforms into a lively club after 10pm on Friday and Saturday. Locals are proud of this landlocked state’s fish dishes – and Kōl’s perfectly tender scallops suggest that being 1,400 miles from the nearest coast isn’t an issue. 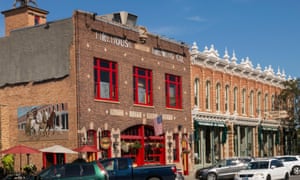 The Lakota tribe, who gave the state its name, inhabited the area for centuries before being subjugated, displaced and massacred by 19th-century settlers. Rapid City’s Journey Museum and the High Plains Heritage Center, 50 miles north in the town of Spearfish, place the Lakota story front and centre in the wider history of the state, neither romanticising nor cheapening it. Sadly, the same can’t be said of Deadwood, deep in the Black Hills. Once the home of real-life frontier icons Calamity Jane and Wild Bill Hickok, it’s a gaudy pastiche of the untamed gold rush town of legend.

Deadwood aside, the Black Hills are largely unspoiled. At 5,000 square miles, it’s easy to spend a couple of days driving around its valleys and peaks, losing yourself in its natural beauty. Spearfish Canyon on the northern edge is a popular entrance point. A winding 20-mile passage that follows the route of an old railway line through verdant slopes and sheer bluffs, it offers plenty of hiking stop-offs. Both the gentle Roughlock Falls Trail and the more strenuous Hike ’76 Trail have their share of impressive views.

Further south, things become more dramatic. Mount Rushmore and the Crazy Horse statue are both in what Dakotans call the Southern Hills, as are the fingerlike granite spikes known as the Needles – a big draw for rock climbers – and Black Elk Peak which is the highest point in the region at 7,242ft. It’s possible to hike to the old fire tower at top of the latter, with a permit obtained from a self-service kiosk on the way up. 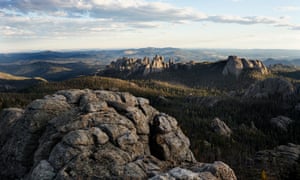 Away from the hairpin bends, the Southern Hills open up into Custer state park, 1,400 square miles of verdant, undulating terrain named after George Armstrong Custer, the controversial US general who led an expedition to discover gold in the Black Hills before being massacred along with his troops at the Battle of Little Bighorn in neighbouring Montana. Here, hundreds of bison are free to amble as languidly as 600lb of prime bovine possibly can throughout the park, though any romantic Old West fantasies are checked by the knowledge that they’ve been known to charge hapless sightseers and even passing cars if the mood takes them.

Custer is an inescapable presence in South Dakota. He lends his name to the town closest to the Crazy Horse Memorial Statue – ironic, given that the Native American chief was on the victorious side at Little Bighorn. Still, Custer (the town) makes a good base for visiting the statue and exploring the area. Its hotels are of the functional chain variety, though it is home to the excellent Black Hills Burger & Bun, hailed by locals as the best burger restaurant in the state. Its reputation, together with a no-bookings policy, means queueing well before the doors open to guarantee a seat, though the sweet-rich Hot Granny Buffalo Burger (bacon, cream cheese, jalapeño sauce) is worth the wait.

More in the midwest

An hour’s drive east from Rapid City, Badlands is one of America’s most recognisable landscapes. Its expansive prairie is impressive but the star of the show is the stratified, alien-looking outcrops of rock. Arrive or depart at sunrise to experience its full magnificence
• nps.gov

Ten miles from Custer and named for its calcite crystals, the Jewel Cave is the third longest cave system in the world with 200 miles of tunnels. The lamp-lit Historic Lantern Tour gives a sense of what it must have been like when Frank and Albert Michaud found it in 1900
• nps.gov

A two-hour drive across the state border into neighbouring Wyoming is Devil’s Tower, one of the most recognisable landmarks in movie history. Made famous by Steven Speilberg’s Close Encounters of the Third Kind, this upturned plug of volcanic rock towers 900 feet above its surroundings.

How to Avoid Hotel Loyalty Fatigue