Home » Family holidays » Hamburg in harmony: the ebb and flow of an artistic city

I made my Hamburg discovery in the Museum für Kunst und Gewerbe. After a happy hour spent gazing at the cabinets of ceramics, glass and decorative treasures dating back to dynastic Egypt, I turned a corner and there it was: a vision of Austin-Powers grooviness. This was Danish designer Verner Panton’s canteen for Der Spiegel, lifted from the magazine’s Hamburg headquarters and transplanted, intact, to the museum of decorative arts. Like a time capsule, the flying saucer lights and violet upholstery capture the optimism of 1960s design.

As Germany’s largest port, prosperous Hamburg has always welcomed innovation. The typische Hamburger is, as our guide Nicola Janocha puts it: “Reserved, unflashy. We’re conservative socialists, but our mercantile past has made us open to change. We spend our money on things that benefit the city.” You can see this in Hamburg’s ever-evolving topography. Office blocks are being reinvented as boutique hotels, such as the Sir Nikolai; Gothic spires loom over contemporary architecture by David Chipperfield and Zaha Hadid. Although it was badly bombed during the second world war, whispers of old, Hanseatic Hamburg remain. One moment you might be in the shadows of a Brutalist block; turn a corner and you find a 17th-century street crossed by the low bridges and canals that give this maritime metropolis its surprisingly poetic charm.

10 of the best things to do in Hamburg

The ebb and flow of water defines the geography of Germany’s second city. At its heart is the Alster Lake, which forms a placid contrast to the River Elbe, an immense tidal artery that courses out of the city to the North Sea, carrying container ships and cruise liners. For a bird’s-eye view, we joined the queues outside Hamburg’s newest landmark. Designed by Swiss architects Herzog & de Meuron, the Elbphilharmonie concert hall rises from the river bank like a giant glacier. Inside, an escalator glides through a white moonscape to the viewing platform that wraps around the building. We bought coffees at the bustling cafe and perched on benches to admire the scenery, an industrial toytown of cranes and pontoons melting into the low, northern light like a Monet cityscape. 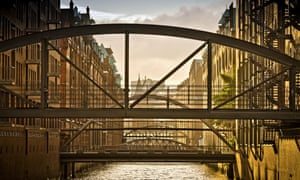 The Elbphilharmonie defines Europe’s largest urban development, HafenCity, which has transformed a swathe of derelict docks into a vibrant shopping and residential area (a third will be social housing) over the last decade. The slanting terracotta facades are a nod to nearby Speicherstadt. In the 19th century, this area of red-bricked warehouses overflowed with customs-free goodies. Flawlessly rebuilt after the war, it is now home to fashion designers and rug sellers who air their wares on the balconies. This Unesco world heritage site stretches to the Kontorhaus, the office quarter, which typifies Hamburg’s gloomy but mesmerising 1920s “brick Expressionism” architecture. Most eye-catching is the Flatiron-esque Chilehaus, which juts out like a landlocked liner.

We paused on a bridge at the Wasserschloss, which has a tea house where you can sample 250 blends. Hamburgers, apparently, prefer tea to coffee. “Hamburg is often described as the most English of German cities,” Janocha said. These Anglophile leanings (tweeds and flat caps were in evidence) stretch back to the 16th century when British merchants were invited to live in the city. They were given their own street, Groninger Strasse and, almost heretical in this former Lutheran stronghold, allowed to build a church. Hamburg, too, is where the Beatles found fame in the 1960s when they played almost 300 concerts, prompting John Lennon to declare: “I grew up in Hamburg.”

Beatles tours, led by ukulele-playing guides, are on offer. With loftier intentions we headed towards the Kunsthalle, on Hamburg’s Kunstmeile or “art mile”, which starts at the grand, turn-of-the-century railway station. Neo-classical rooms give a vivid introduction to German art history; Lucas Cranach’s pensive Madonnas and Caspar David Friedrich’s luminously Romantic landscapes are among paintings by Rembrandt and Manet. We were flagging by the Expressionists but for those with stamina a walkway leads to a cube-like extension filled with works by Gerhard Richter, Georg Baselitz and Joseph Beuys. 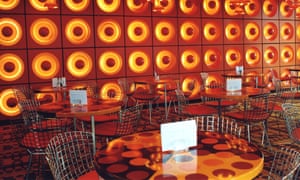 Sunday (when the shops shut) felt like the right time to visit Alster Lake, a watery version of Central Park. On a bracing morning, a snug boat trip looked tempting. Instead, we strolled along the reed-lined shore with its sailing boats and backdrop of stuccoed villas. Our pit stop was the Literaturhauscafé where the Belle Epoque gallery – chandeliers, painted ceilings – overlooks the lake. At brunch time it hummed with locals locked in earnest chat over prosecco and küchen.

Threading our way through the New Quarter (confusingly it dates from the 17th century), passing the stately English Church, we turned in to Komponisten Quartier “composers’ quarter”, an immaculately rebuilt street of gabled brick and stone townhouses. Each one is a museum devoted to famous musicians who worked here: Felix Mendelssohn, Carl Philipp Emanuel Bach (son of JS) and Gustav Mahler. Georg Philipp Telemann, who became director of music in the city’s five main churches in 1721, composed Hamburger Ebb’ und Fluth (ebb and flood), a suite that celebrates the city’s aqueous appeal. 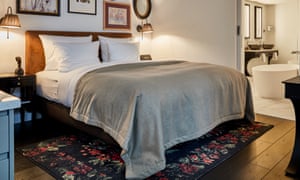 As church bells chorused, an enthusiastic tweed-jacketed curator ushered us inside. “I have something wonderful to show you,” he said. It was a pianola, an early mechanical piano that plays pre-recorded music. The original “software” – a 19th-century cartridge perforated with notes – was installed and the pneumatic workings wheezed in to action. The ponderous chords of Mahler Plays Mahler drifted across the panelled room: yet another innovation for us to marvel at.

Hotelier and owner of the Sir Nikolai hotel, Liran Wizman’s Hamburg haunts
Café Paris, on Rathausstrasse, has a classical interior and French cuisine; opposite, Le Lion has the best cocktails in town. Hamburgers love their local Italian places; my favourite is Palazzo Nevis Fontaniello on Rothenbaumchaussee – dancing on the tables is guaranteed. The Deichtorhallen is one of the biggest museums of contemporary art and photography in Europe. It has a progressive curator who makes it worth a visit.

Pictured: The eye-opening design for a mini city in the sky in Toronto

You No Longer Need a Reservation to Visit Yosemite National Park