For a small country like Britain, the idea of claiming one of the longest footpaths in the world sounds a little ambitious. But that’s what we’re up to with the creation of the England Coast Path, and the proposed completion date of 2020 is not too far away. The route will go all the way round the English coast, and a quick look at the map of this island nation, with its countless inlets, estuaries and jagged bits, shows that the projected total length of 2,795 miles is not as outlandish as it sounds.

It’s already possible to walk round the whole of the south-west peninsula, from Minehead in Somerset to Poole in Dorset, on the 630-mile South West Coast Path. This accounts for roughly a quarter of that target. There are also footpaths along substantial stretches of the coasts of Sussex, Kent, Essex, Lincolnshire and Northumbria. 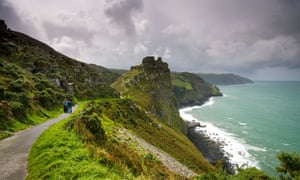 Then there is the East Anglian rump of Suffolk and Norfolk. For a walker prepared to shuttle between the backs of beaches and the low tops of crumbling cliffs, this is perhaps the most dramatic of England’s hinterlands. The sea and the land have been fighting it out for ever, with thriving medieval ports like Dunwich in Suffolk now beaten back to a handful of streets. The remnants of the original Roman settlement are now more than a mile out beneath the waves.

The stretches of English coastline that do not yet have pedestrian rights of access are in various stages of negotiation involving landowners, user groups and other interested parties on the one hand, and the government’s advisory agency, Natural England, and the Department for Environment, Food and Rural Affairs on the other. There are 66 such stretches, overseen by eight teams. In each case, the process takes about three years and it finds England in its most meticulous vein of local democracy: intense consultation, on-path meetings, reports, period for objections and examination by independent DEFRA-appointed inspector. Finally, after another six to nine months for work on ground issues such as silage and drainage, the process produces a Commencement Order.

One stretch that is already up and running – or walking – is the 25-mile section between Sea Palling and Weybourne, which is part of the established Norfolk Coast path, one of England’s 15 National Trails (the South West Coast Path being the longest). 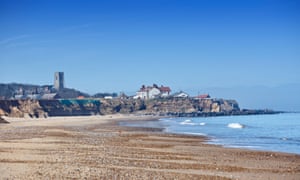 To come this way is to find yourself right on the frontline of the elemental war. In the Norfolk village of Happisburgh, four miles north of Sea Palling, people joke grimly that Beach Road is now more beach than road. Around here I’ve heard stories of householders having to pay for the removal of their collapsed homes; of insurance companies withdrawing cover; of sea-dredging being to blame for the currents ripping into the soft shore with extra force; of the tidal defences at Bacton gas terminal having a similar effect.

When I first came here, more than 20 years ago, I slept in a B&B from which I could hear the sea thudding, almost as if it was in the next room. This time I made sure to head a few crucial yards inland, to the Hill House pub in the village centre. My bedroom here is a converted signal box for the never-completed extension to the Great Eastern Railway.

One man in the village reckoned that if the sea comes just a couple of feet higher than in previous winter storms, it could spill over the lip of the dunes and flood all the low-lying ground between here and Norwich, nearly 20 miles inland.

Alarmist? Possibly, but then this coast is still awash with memories of the great floods of 1953, in which more than 300 people lost their lives. It may have been a different England – a post-war, monochrome place with Churchill still in Downing Street and the young Queen yet to be crowned in the wake of her father’s death – but the resonances are fearsomely topical. Infrastructure was trashed, bridges swept away, 160,000 acres of land washed out of production and £1.2bn of damage in today’s money. A train pulling out of Hunstanton was lifted clean off the rails by a following wave, and further south a miracle baby floated to safety in her cot. 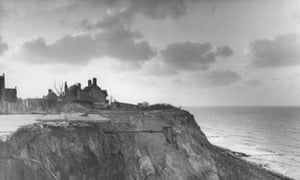 The echoes of that disaster are almost audible along these massive sand fringes, the human responses defiantly, hopefully visible in the groynes taking the battle out into the water and the revetments doing their best to shore up the flaky little rearguard cliffs.

It’s easy to see why Natural England thinks the 2020 coastal path project is an idea whose time has come. Sally Fishwick, senior adviser for coast path delivery, points out that in Trimmingham, north Norfolk, a people-counter recorded 2,036 walkers on a newly opened stretch of path in the spring of 2014. In the same period last year, the number had risen to 3,097. 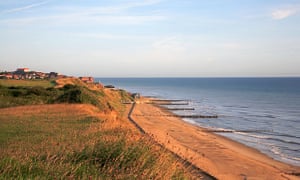 To be on foot here is to court a slow hypnosis. Walcott, Broomholm, Paston (where the medieval family of that name wrote their famous letters), Mundesley (popular with Victorian holiday-makers), Sidestrand, Overstrand … The places pass by on their low ledges as the route leans to the left round the long shoulder of this embattled land. In the gaps between the towns and villages it has as strong a sense of Empty Quarter (the desert in the Arabian peninsual) as anywhere in the country.

Then, some 12 miles from my Happisburgh starting point, a bigger protrusion comes into view. From a distance it could be an enormous breakwater, until the unmistakable contours of an English seaside pier, with a theatre on the end of it, harden through the sea air. This is Cromer, jewel of the north Norfolk coast, where the crabs come from and the OAPs’ charabancs go to. I stayed at the Hotel de Paris where, although in my sixties, I felt like a boy.

The last eight miles to Weybourne follows the relatively built-up shoreline via Sheringham, with its excellent crab restaurants, its throwback Little Theatre, its restored steam railway line to Holt and the indispensable Coasthopper bus plying the route. After all the beaches of the day before, the shallow slopes as I look inland seem to have acquired the grandeur of Himalayan foothills.

Where to Vacation When It's Freezing