Early morning and a group of eight river otters in the bay eye us with nonchalant curiosity as we pack the kayaks. As we paddle off into the Pacific, our bows cut through reflections of mountain peaks and impenetrable rainforest. Two dolphin fins slice the mirror. When we round a cape, a west coast fog blurs the horizon and erases the shore, leaving only sea and sky, just as it was before Raven Child, as the Haida myth tells, dropped a black pebble into the ocean and created these 200 islands.

This archipelago, 100km off the coast of British Columbia, has been known by several names: Xhaaidlagha Gwaayaai, or islands at the boundary of the world; then the Queen Charlotte islands in British colonial times; and now, since 2009, Haida Gwaii, islands of the people. The Haida have probably lived there since the end of the last ice age, 11,000 to 13,000 years ago, making them one of the oldest traceable populations in the world. They have thrived here for millennia, shielded by their remoteness and supported by the abundance of the temperate rainforests and rich ocean.

But in the 20th century, loggers cut an area larger than Greater London, taking away from the islands more than 100 million cubic metres of wood, much of it centuries old. Seeing their way of life disappear and tired of negotiations and court cases, the Haida blockaded the loggers on Athlii Gwaii (Lyell Island) in 1985. Seventy-two protesters were arrested and the incident drew international attention. Their victory led to the creation of Gwaii Haanas national park reserve and Haida heritage site, with the Canadian and Haida Nation governments cooperatively overseeing the park and reaching all decisions by consensus. 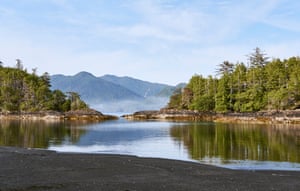 Covering almost 15% of the archipelago’s total land mass, the park is the only place in Canada to be protected holistically from sea floor to mountain top. Its wild coastlines and old-growth forests are home to a wealth of animal life – 750,000 seabirds, 20 species of whale and dolphin, and several endemic land mammals, such as North America’s largest black bear – as well as a rich Haida history.

There are no roads or trails here. The only way to explore the park is by sea; last year, it had just 2,800 visitors. Sailboat charters offer familiar comforts but sea kayaking and camping put visitors firmly in the wild. Our casting-off point – reached via a wild four-hour Zodiac RIB boat ride from Moresby Camp, which in turn is an hour’s drive along logging roads from Sandspit – is the former whaling station of Rose Harbour, where Gord Pincock, owner of Butterfly Tours, and his assistant Pete Fleck welcome us. 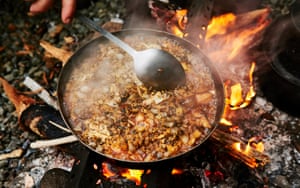 As the eight of us load gear and food for a week, Pincock distills his 36 years of paddling experience in the area into a series of orientations on everything from eating lunch to water safety. The details are necessary, he says, “because we’re taking single-human-powered craft on to the edge of the largest ocean on Earth”.

It rains a lot here: four metres a year on average. The winds are the strongest in Canada, with waves that can reach a height of around 11 storeys (35 metres). The weather can shift in an instant.

But, for our entire week, the sea and sky stay calm. During the first days, we explore sheltered bays and inlets, lingering along cliffs at low tide to investigate intertidal life: walls of hand-sized mussels, starfish the size of teddy bears, purple-hinged clams, and urchins in their burgundy shells of spikes. My eyes, accustomed to the urban, begin to see differently, to notice the minute and interconnectedness of nature. Early one morning, I watch the busy life of an intertidal pool for what seems like an hour. 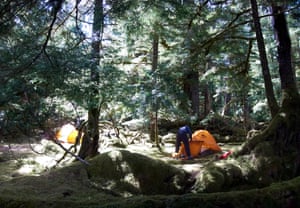 We camp on beaches hidden in coves, with the mossy forest floor as a mattress and rowdy birdsong as our alarm clock. Time simplifies into day and night, into lunch and dinner, into the rhythm of necessities. Pincock creates delicious meals over driftwood campfires, from his jum soup (a Haida fish stew) to multigrain pancakes. We also fish from our kayaks, anchoring to the tendrils of a kelp forest and dropping lures. In a matter of minutes we hook several rockfish, which are added to a miso soup concoction.

Wandering through the forest, among the centuries-old sitka spruce and western red cedar, Pincock points out a cut wedge in a trunk. The Haida, in search of ancient cedar to carve into totem poles or canoes, tested the tree to see if it was rotten – cedars rot from the inside out. Even if it was rotten, it would be left standing, as the tree can still live hundreds of years more. Throughout the park there are more than 600 recorded archaeological sites representing human activity, from canoe runs to piles of discarded shells, to fish weirs, some dating from the last ice age.

In clear weather on the fourth morning, we dash out into the open Pacific and head for Cape Freeman, our most remote destination. In my kayak, I feel like a feather being tolerated by the ocean. The swell is calm but still we disappear from each other’s sight in the wrinkled troughs. I spot a fin in the distance, perhaps an orca. Timing the tide right, we land on the beach, which probably hasn’t seen a human being for a year, says Pincock. We stay for only an hour, not wanting to get trapped by tides or weather. We comb through the Japanese trash and jetsam. Never have I felt so at the edge of geography and time. Japan, over the horizon, feels closer than the rest of Canada, and the minutes dilate in the solitude. I find a Japanese glass fishing float the size of a fist as a souvenir. 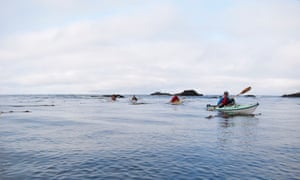 The next day we paddle to the Unesco world heritage site of SGang Gwaay (which translates as wailing island). It’s one of five locations throughout the park that the Haida Watchmen protect. Started in 1981, the volunteer programme safeguards the natural and cultural heritage of the park, while also educating visitors. As we wait on the beach for our tour, we watch a young Watchman quickly fillet three large halibut. He gifts us two huge pieces.

Kathleen Sanderson, at the end of her month-long stay as a Watchman, takes us through the former Haida village of Ninstints. It’s a sacred place – the Haida still come here to commune with ancestors and report hearing voices and drumming – on a small bay, eerie yet tranquil. Twenty longhouses once stood here, with 30 to 40 people living in each. Only the foundations and fallen cedar beams remain. Many of the village’s stories have also been lost, though they still know some of the houses’ names: Cloud House, Grease House, People Think About this House Even When They’re Sleeping Because the Master Feeds Everyone Who Calls, and House That Is Always Shaking. 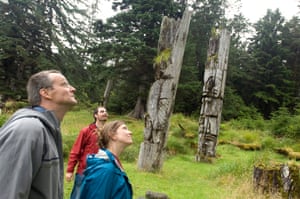 The site also contains the largest collection of Haida totem poles still in their original location. The two dozen or so carved grey mortuary poles are being allowed to decay, true to Haida belief. The remains of chiefs, whose stories are told in the crests of animal and supernatural figures, were each interred in a bentwood box. The boxes, each crafted from a single piece of wood that was steamed and shaped, were then placed at the top of the poles. Their soul merged with the tree, and once the earth reclaimed the pole, they could move on in their journey.

An 1862 smallpox epidemic, brought by gold diggers from San Francisco, spread through the Haida’s trading networks and doomed the village, which was abandoned around 1885. Once numbering around 20,000 across the archipelago, the Haida were reduced to less than 600 by the end of the 19th century. Now they make up half of the islands’ 5,000 residents, alongside people from across Canada.

Colonial programmes of assimilation further sought to erase the Haida and their culture. Residential schools removed island children and took them to places such as Alert Bay, over 400km away, and Chilliwack, over 800km away. The government also banned the potlatch, an important ceremonial feast given by a chief to conduct business, perform rituals, and garner prestige by distributing gifts. Only 30 islanders, mostly elders, still speak Haida fluently. Objects were looted or shadily bought by collectors. A 1957 salvage expedition to SGang Gwaay cut down 11 poles and sent them to museums on the mainland. “New York has more Haida memorabilia than Haida Gwaii,” says Sanderson. 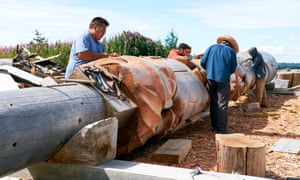 But they are recovering their language and culture. The first Haida-language feature film, Edge of the Knife, is set for release this year. And a repatriation programme has returned more than 500 ancestral remains from collections around the world, with only one still in the British Museum. The next step is getting back some 12,000 artefacts.

The week before, we had visited several artists in Old Massett, in the north of the archipelago, learning about their internationally renowned poles, sculptures and carvings in argillite – a kind of black slate found only at Slatechuck Mountain. Master carver Jim Hart and his five assistants were working on the Reconciliation Pole in the open air. For two years they had been carving this 800-year-old cedar to represent the past crimes of residential schools and a future hope of healing.

Despite this progress, one question still looms: who has jurisdiction over these lands and waters? The Haida never ceded their home, or signed a treaty, and in 2002, they filed a case claiming title to Haida Gwaii, which is still waiting for a court hearing.

With the rights they have already won, the Haida have been moving to a more sustainable economy. More than half of the island’s land is protected, and though there’s still logging, the Haida now have more control and have proposed a 1,000-year cedar plan so that later generations will have access to “monumental” trees for carving. The tourism sector has grown to be one of the largest employers, with the commercial fishery giving way to high-end fishing resorts and their cultural and natural heritage packaged into immersive stays at boutique lodges: a new floating lodge on the west coast is to open in 2018.

We end our week of kayaking at Rose Harbour and stay our last night in Götz Hanisch’s rustic guesthouse. It was created by 13 hippies looking for utopia, who bought this freehold land before the park was created and have lived here since 1983. Three of these homesteaders remain, running two guesthouses and a restaurant. Like the Haida, they live with the land and sea. Their rich gardens, fertilised with kelp and ground whalebone, are impressive.

Returning from Gwaii Haanas feels like returning with a secret. The Haida artist Bill Reid put it like this: “When, or if, we should decide that subduing is not the only, or even most desirable way of making our way through the world, these shining islands may be the signposts that point the way to a renewed harmonious relationship with this, the only world we’re ever going to have.”

The Haida phrase for this is yah’guudang – respect for all living things.

• Butterfly Tours (butterflytours.bc.ca) runs kayaking trips from late June to August, ranging from five to 14 days, including camping and guesthouse accommodation and excursions. A five-day trip starts at £1,525. Seaport B&B (seaportbb.com) in Sandspit has doubles from £58. Air Canada (aircanada.com) flies from Heathrow to Vancouver from £461 return, and from Vancouver to Sandspit from £401

Fly to more Egg Cellent Fun in the Philippines ·

21 things to do in Nepal – A Luxury Travel Blog