Adeng adeng is a traditional Balinese mantra meaning “slowly, slowly”. It’s a phrase you don’t often hear these days among the traffic jams and sunbed logjams of Bali’s booming tourism centres. People say that Bali is spoiled and for years the search has been on for a “new Bali”. But the old Bali never really disappeared: it just went west.

The nation’s airline, Garuda Indonesia, has perhaps sensed this, as it has a new, direct 15½-hour flight from Heathrow to Bali starting on Tuesday (22 January) – although the return journey goes via Jakarta.

I first fell in love with west Bali 16 years ago when, as a backpacking surfer, I was “adopted” for a year by a rice-farming family. I was attracted not only by uncrowded surf but by the mist-shrouded rainforests that descended through clove and cacao plantations to coconut groves that sheltered fleets of colourful fishing boats. Even more than the breathtaking landscapes, it was the wonderfully hospitable locals that lured me back, regularly, until the area became my home five years ago.

Few people on the island, even among Bali’s large expat community, ever take the time to visit this area and, since there’s only a relatively small chain of roads circling the inland forest, perhaps they imagine there’s little to see. But Bali’s “wild west” offers unexpected highlights.

For a start, there’s one of the world’s most colourful fishing fleets. The little river inlet at Perancak is home to more than 100 huge timber boats. Much more than just a working fleet, the flowing bunting and ornately decorated crows nests lend the appearance of a floating carnival. With their ranks of longtail engines protruding from the gunwales, they could be mistaken for garishly painted Viking longships. You’re unlikely to see a tourist here but, for a small amount, you can often convince a boatman to give you a tour. 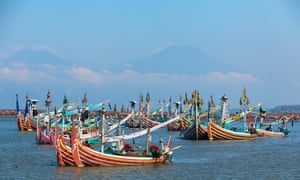 It is believed that the traditional sport of makepung (buffalo chariot racing) arrived in Bali from the nearby island of Madura. Shortly after dawn on most Sunday mornings you can witness a frantic stampede of charging buffalo (many of them with startlingly pink skin), hauling chariots at speeds of up to 25mph along a rough dirt-track racecourse around the paddies.

Then there is west Bali’s forgotten sea temple: Rambut Siwi is among the least known of the island’s coastal temples, which protect the island from evil forces from the sea. The sprawling grounds are peaceful and, unless there’s a ceremony on, invariably deserted – a world away from the bustle of famous sister temples at Uluwatu and Tanah Lot. Take in the views over miles of beach that rarely see a footprint before you descend to the haunting grotto cave at the foot of the cliffs. 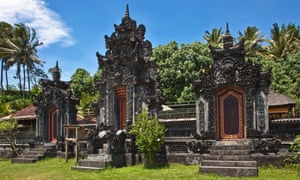 The western end of Bali is covered by more than 200 square miles of uninhabited jungle, home to endemic ebony leaf monkeys, deer, giant monitor lizards, hornbills, civets and flying foxes. West Bali national park, at the westernmost tip of the island, is the most accessible part of this wilderness and offers wildlife-watching opportunities. The beautiful Bali myna, or Bali starling, was once so endangered there were only believed to be eight left in the wild. Gleaming white with a flash of blue eye-shadow, these birds are not hard to spot in the wild if you know where to look; the rarely-visited ranger station at Teluk Brumbun offers a chance to see a sizeable wild flock of these avian dreams.

In keeping with the uncrowded theme, west Bali also has its share of deserted beaches. Stretching east and west from the rocky point at Medewi is an incredible 20-mile sweep of beach with not a single sunbed. The black volcanic sand is shaded with arching coconut palms rather than looming hotels and the only people you’ll have to share it with are a few Balinese fishermen. 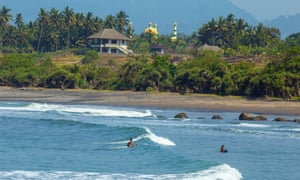 There are surfing stats to admire, too. On a clean day, rides of a third of a mile have been recorded at Medewi. The paddle out to the line-out can be tricky but a deceptively easy takeoff makes this a very rideable left-hand wave for intermediate surfers. Everything comes with a price, of course, and visiting surfers often soon realise that a few drops of blood left on the sharp rocks is the cost of a session here. (Staff at the nearby clinic get more than their share of suturing practice).

For those who like longer beneath the waves, there is Menjangan Island (less than two miles long and named after the deer that roam its beaches). This is Bali’s most spectacular diving and snorkelling venue and is the ideal place to escape the over-crowded reefs off the east coast. The steep dropoff here is a great place to watch an entire universe of marine life that frequently includes turtles, rays, eels, sharks, dolphins and, occasionally, whale sharks. 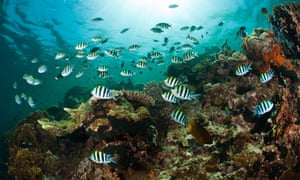 You can rent a stand-up paddleboard to skim across the reefs at Pemuteran beach or hire a kayak from The Menjangan eco-resort to explore the mangrove forested inlets of Bali’s north-west coast. The sheltered lagoons and reefs are a delightful contrast to the wave-smashed south and up here you still have a chance to explore the flooded mangrove forests that once covered so much of the coastline. 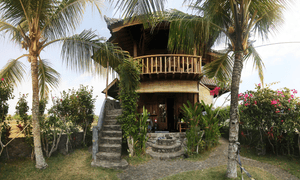 Medewi Surf Homestay
On the beautiful expanse of paddies north of Medewi beach, this is a favourite with surfers on a budget. It has rooms with fans from £14 and rooms with air-con from £22. Surfboard and motorbike rental also available.
• medewisurfhomestay.com

Global Dive Lodges
Unusually named since it is very local and it’s the only one, this is a gem in the north-coast beach town of Pemuteran. Starting at £12, the rooms are great value and the restaurant is one of the town’s best budget places to eat. The staff can arrange diving trips and Padi courses.
• globaldivelodges.com 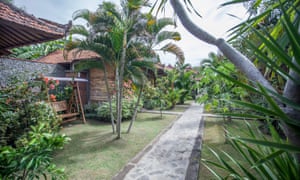 Bombora Medewi Wave Lodge
There are spacious rooms overlooking Medewi’s legendary left-hand pointbreak. The bar and swimming pool provide the best places to chill and watch the waves.
• Doubles from £58 room only, bomboramedewi.com

The Menjangan
Inside West Bali national park is the island’s finest wilderness resort. It is an excellent base for diving Menjangan Island, kayaking along the fringe of mangrove forests and bird-watching, and also simply for relaxing among a spectacular diversity of wildlife.
• Doubles from £100 B&B, themenjangan.com

A stroll around one of the most northerly cities, Longyearbyen