Here, somewhere between Lisbon and New York, the weather is mild but decidedly unstable. Atlantic fronts barrel in, clouds tussle, shafts of sunbeams and great fat silvery pools of light chase over swelling seas to fields of infinite greens. For the Azores you pack a cagoule and sunglasses, your swimming gear and walking shoes, for you’re never more than a few minutes from a dramatic basalt seashore or an alluring grassy pathway.

This family of nine Portuguese sea-splattered volcanic farming islands is now easier than ever to visit, with the introduction next week of the first low-cost flights – from both easyJet and Ryanair – that will enhance the year-round and inter-island offerings of state-run SATA. Both will fly into São Miguel, the chief Azorean island. There are three island groups, extending over 370 miles, so to get around you need to either hop on a turboprop or plough through the waves on ferries. 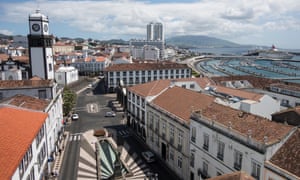 Flying in, my sense is that the island floats along on a fast, froth-topped sea. Intensively rippled and peaked as it is, São Miguel’s surface seems constantly in motion, too. With almost 50,000 inhabitants and a thriving university, its handsome capital, Ponta Delgada, also feels like it’s on the move. It offers great eating and meandering – and I manage a great deal of both.

Where to eat
Money-wise, the Azores are a great deal: petiscos (Portuguese tapas) run at about €1 a pop, as does a glass of beer or wine. (Azorean white wine is nicely drinkable, but the red’s filthy.)

I loved buzzy A Tasca (around €16pp including wine, Rua do Aljube 16) whose hilariously hefty smoked black pudding petisco comes with chargrilled local pineapple. And get to Mané Cigano (lunch only, Rua Eng José Cordeiro 1/3) early: this salty, no-frills joint serves mounds of spanking fried mackerel at €5.50 for as many as you can handle, and cracking grilled octopus, too. Like its Portuguese mother, Azorean cuisine revolves around gargantuan portions of sturdy, often meaty meals, so it was a treat to discover Rotas Ilha Verde (around €20pp including wine, it’s tiny – reservations essential, Rua Pedro Homen 49) where excellent, exclusively vegetarian, food is served. The place is quietly groovy, verging on the hippy, and well worth the visit for Caterina’s sublime caramelised garlic and chestnut risotto and her rich-but-light chocolate cake.

Where to drink and enjoy live music (and soak in hot springs)
Ponta Delgada’s bar and music scene is great fun, too. Arco 8 (around €14pp for petiscos and drinks, Avenida Abel Ferin Coutinho) is an art gallery, performance space and cafe, and serves killer mojitos, while Colégio 27 (€27pp plus wine, including music, Rua Carvalho Araujo 27) specialises in live jazz. Both are venues for this weekend’s Tremor indie music festival. Yes, I’m surprised, too, having thought the Azores were all about your blue-rinse cruise passenger: there’s a virile, vibrant creative culture on every island, with hundreds of festivals from jazz to clowns. There’s a feeling of deep, old-fashioned spirituality on each island too, with frequent religious festivals.

Bright, confident 24-year-old Jorge runs Holistika, which offers an intriguing mix of tours that meld, say, swimming with dolphins with mindfulness and yoga (full day from €60pp). He takes me to Sete Cidades, a spectacular caldera three miles across, complete with breeze-ruffled, human-free, jade-hued lake. In Jorge’s lively company, Sete Cidades becomes a sacred space, a place of wonder. São Miguel’s many calderas may look like they’ve come straight out of Lord of the Rings, but the last significant eruption was in 1957, when the Capelinhos volcano, on the western coast of Faial island, blew its top. On the green drive from Sete Cidades, we pass a romério of men in rough shawls and bright scarves bearing metal-tipped staffs and chanting prayers whilst pilgrimaging around the island’s many churches. 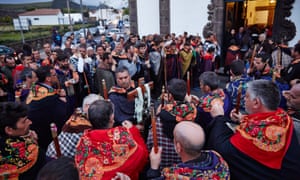 Geothermal energy powers much of the island, and provides numerous hot springs. We spend at least one lifetime floating our aches away in the hot lake at Terra Nostra Botanic Gardens (adults €6, children €2.50) in pretty Furnas. At Furnas Lake, the kitchen trick is to slow-cook cozido in the underground hot springs. They serve this Portuguese pot au feu at Tony’s (around €20pp plus wine, Largo da Igreja), where portions are big enough to floor a hungry hobbit.

The Termas Ferraria spa (full day from €34) on São Miguel’s jagged northern tip is efficient, but better is Ferraria’s (free) rock pool, where you’re gently braised by hot spring water while grabbing gamely on to ropes as the Atlantic pounds wildly over your head. Caldeira Velha (signposted from Lagao do Fogo, entry €6) offers a tamer dip, but in green jungly beauty so lush as to remind me of Hawaii. The time-worn mobile bar outside will sell you a tot of Azorean rice pudding liqueur. Jorge also introduces me to the tea factory at Chá Gorreana (Gorreana de Cima, free) with its vintage machinery, and to secret waterfalls, lonely surf beaches and cool sundowners at Caloura Bar-Esplanada (Rua da Caloura 20, Agua de Pau, meals from €14). After a couple of days here I feel whole and fresh. If you visit nowhere else in the Azores, seek out São Miguel.

Where to stay
In Ponta Delgada, Hotel Talisman (doubles from €65) has a rooftop pool; ¾ Hostel (dorm beds €15, rooms from €35) is amazing value. A few minutes out of town, and close to a lovely beach, Solar Gloria do Carmo (doubles from €70) is atmospheric and welcoming; nearby is Quinta da Grotinha (doubles from €50), a charming turismo rural. At Caloura, Quinta do Mar (from €80) is a quietly classy boutique B&B. And it’s worth splashing out at Terra Nostra Garden Hotel at Furnas (doubles from €95) for the chance to slink out after dark for a private splash about in the bath-warm, camelia-bowered lake. 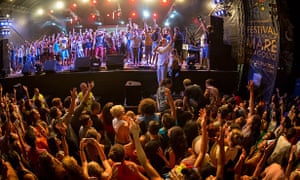 The 15-minute flight from Ponta Delgaa to Santa Maria reveals the island as a tablecloth-sized tumble of five farming parishes: there are twice as many cows as people in the Azores, a fact borne out on Santa Maria, which has 10,000 cows and 5,500 people. My guide, Laurinda, walks me to the top of the island’s highest point, Pico Alto (590 metres), from where it feels as though you can reach out and hug both sides of the island. We spend a dreamy day coasting along country lanes, slowing for many a lingering Olá! with smiley ladies in flowery housecoats and for herds of cows on their way for milking.

From 20-22 August, the island hosts Mare de Agosto, Portugal’s oldest music festival. There is also a folk festival, from 11-12 July, and a blues festival, from 16-18 July.

On each of the islands there are specialist operators offering coasteering (adventure swimming and climbing), canyoning (leaping crazily down waterfalls, mostly) and kayaking trips and jeep safaris. Santa Maria’s Bootlá (activities from around €45pp per day) is run by two women who double as the island’s air traffic controllers. 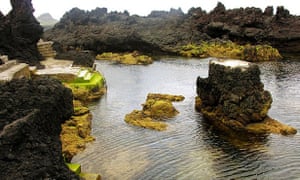 The town centre botanic garden is where students from the tiny uni and gossiping men in leather-front cardigans take their ease. There’s a grid of pretty shopping streets where almost every second address offers something tasty to eat or drink; the sea glimmers and above, Monte Brazil – the remnants of a volcano – is an essay in green. Angra wears its history with grace and quiet panache, and in today’s contrast-rich Atlantic light, feels like a poem, shot in Technicolor.

Where to eat
There are treacly, spice-filled Dona Amélia tartlets to be scoffed (through a mist of icing sugar) at O Forno (Rua São João 67), and groceries to be bought for the pleasure of it in Basilio Simões’ atmospheric old emporium on Rua Direita. I hang briefly with cool, young Angra cafe society at A Minha Casa (Rua Direita 80) then, as the inevitable weather front comes in, swing down the rainbowed road to the fishing village of São Mateus, where Restaurant Beira Mar on the dockside (lunch around €18 plus wine) provides cheery platters of just-landed parrot fish, rapidly chargrilled.

Even for those of us with gargantuan appetites, the Alcantara beef stew at Os Moinhos in São Sebastiao (€20 including wine, Rua Arrabalde 4) may have been a bite too far. I walk it off inside the cathedral-like hollow volcano at Algar de Carvao.

There are 73 impérios on the island. These century-old, community-run chapels are brightly, beautifully, lovingly painted and chime nicely with my mood on the winding drive to Biscoitos, where natural swimming pools offer summer bathing amid rock formations that look like frozen fire. Biscoito’s villagers plant their grapevines in tiny lava rock enclosures to protect them from the salty breezes. And though the ocean seethes and pounds all around, I feel cosseted and terrifically cheered by Terceira. 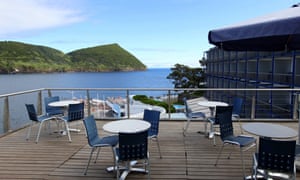 Accommodation is very limited. Quinta do Martelo (doubles from €85) is a fab turismo rural; Hotel do Caracol (doubles from around €70) is a 20-minute stroll from Angra, and offers wide sea views. Mário Rego (+351 966 302 853) is a lovely guide and specialises in Terceira’s rich ornithology and geology.

The nine main islands at a glance

Central group
Terceira Culturally rich, with pocket-sized Unesco-listed capital Angra do Heroísmo.
Pico Dominated by its 2,350-metre Fuji-like volcano which gives the island its name. Home to the excellent Azores Fringe Festival in June – an Azorean Edinburgh.
Faial Legendary destination for sailors coming east on the Atlantic winds. Hang out with them at Peter Café Sport.
São Jorge Isolated farms hunker under massive basalt cliffs on this island famous for its cow’s cheeses and tuna conserves.
Graciosa All-but-abandoned natural beauty. Come for the daily summer Holy Ghost processions and the peace. 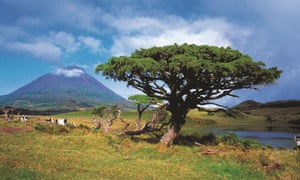 Getting around
Air SATA (sata.pt) connects all nine islands
Sea Transmacor operates ferries all year round between Faial, Pico and São Jorge, trips from €13. Atlântic Online runs daily services between all the islands from May-September

The trip was provided by Sunvil Discovery (020-8758 4722). A week in the Azores costs from £640pp, including direct scheduled flights from Gatwick with SATA International, transfers and seven nights’ B&B on São Miguel (other islands can be added to the itinerary). For more information see visitazores.com.

Get Inspired By This Award-Winning Adventure Travel Film

Stay in a Posh Beverly Hills Suite for Just $10